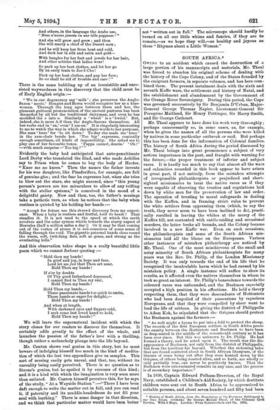 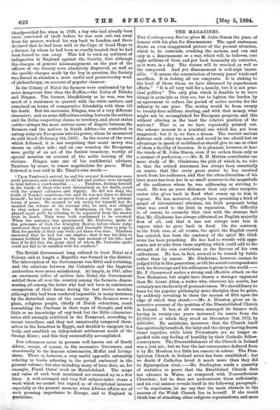 OWING to an accident which caused the destruction of a,

large portion of his manuscripts and materials, Mr. Theal was forced to abandon his original scheme of dealing with the history of the Cape Colony, and of the States founded by the emigrant farmers, in separate volumes, and has here com- bined them. The present instalment deals with the sixth and seventh Kaffir wars, the settlement and history of Natal, and the establishment and abandonment by the Government of the Orange River Sovereignty. During this period, the Cape was governed successively by Sir Benjamin D'Urban, Major- General George Thomas Napier, Lieutenant-General Sir Peregrine Maitland, Sir Henry Pottinger, Sir Harry Smith, and Sir George Cathcart.

Mr. Theal appears to have done his work very thoroughly; perhaps unnecessarily so, in some cases, as, for example, when he gives the names of all the persons who were killed

by natives in some particular outbreak or raid. But perhaps this has been done for the information of Colonial families. The history of South Africa during the period discussed by Mr. Theal brings into great prominence a subject of very serious importance in the past, and fraught with warning for the future,—the proper treatment of inferior and subject races. It is hardly too much to say that almost all the wars and calamities recorded in this book appear to have arisen in great part, if not entirely, from the mistaken attempts of irresponsible philanthropists or prejudiced and short-

sighted missionaries to treat the native races as if they were capable of observing the treaties and regulations laid down by white men for the preservation of law and order..

The operation of trusting to moral safeguards in dealing with the Kaffirs, and in framing strict rules to prevent

the white settlers from oppressing them (which, to say the truth, they never seem to have been inclined to do), practi- cally resulted in leaving the whites at the mercy of the Kaffirs till, not contented with cattle-raiding and occasional murders, the latter broke all bounds, and the Colony became involved in a new Kaffir war. Even on such occasions,

the philanthropists and some of the South African mis- sionaries laid all the blame on the Europeans. Various other instances of mistaken philanthropy are noticed by Mr. Theal. One of the most mischievous of the small and noisy minority of South African philanthropists for many years was the Rev. Dr. Philip, of the London Missionary Society. It was only towards the end of his life that he recognised the incalculable harm which he had caused by his mistaken policy. A single instance will suffice to show its results, as it affected even the natives themselves in whom be took so great an interest. Dr. Philip's benevolence towards the coloured races was unbounded, and the Bushmen especially occupied a high position in his affections. He held a theory respecting them, that they were descendants of Hottentots

who had been despoiled of their possessions by rapacious Europeans, and that they were compelled by sheer want to lead the life of robbers. In giving the district of Philippolis to Adam Kok, he stipulated that the Griquas should protect the Bushmen against the farmers :- " As well might a hyena be put into a fold to protect the sheep. The records of the first European settlers in South Africa prove the enmity between the Hottentots and Bushmen to have been as deep-seated in the middle of the seventeenth century as it has been ever since. But this was unknown to Dr. Philip. He had formed a theory, and he sated upon it. The result was the dis- appearance of Bushmen, not only from the district of Philippolis, but from the territory far beyond. Whether the sickening tales that are found scattered about in South African literature, of the throats of some being cut after they were hunted down by the Griquas, of others being roasted alive, and so forth, are wholly or only partially true, can never be positively known. That the Bushmen were exterminated remains in any case, and the process is of secondary importance."

In 1830, Captain Edward Pelham-Brereton, of the Royal Navy, established a Children's Aid Society, by which destitute children were sent out to South Africa to be apprenticed to suitable persons, and about seven hundred and fifty had been

• Historu of South Africa, from the Foundation of the European Sett/anent to our Own Times. (1434-644 By George McCall 'Meal. of the Colonial Civil Service. With 6 Maps. London: Swan Sonnenschein and Co. ISM

thusiprovided for, when in 1839, a boy who had already been twice convicted of theft before he was sent out, ran away from his master, worked his way back to London, and there declared that he had been sold at the Cape of Good Hope to a farmer, by whom he had been so cruelly treated that he had been forced to run away. This led to such an outburst of indignation in England against the Society, that although the charges of general mismanagement on the part of the officers of the Society were absolutely disproved, as well as the specific charges made by the boy in question, the Society was forced to abandon a most useful and praiseworthy work of philanthropy, on account of popular clamour.

In the Colony of Natal the farmers were confronted by far more dangerous foes than the Kaffirs,—the Zulus of Tsbaka and Dingan. The former, bloodthirsty as he was, was too much of a statesman to quarrel with the white settlers, and remained on terms of comparative friendship with them till tis death. But his successor, Dingan, was of a very different -character; and on some difficulties arising between the settlers and the Zulus respecting claims to territory, and about stolen -cattle—always the most serious cause of dispute between the farmers and the natives in South Africa—he contrived to entrap sixty-six Europeans into his power, whom he massacred in cold blood (February 6th, 1838). In the course of the wars which followed, it is not surprising that scant mercy was shown on either side ; and on one occasion the Europeans were guilty of an act of the foulest treachery, worthy of special mention on account of the noble bearing of the victims. Dingan sent one of his confidential advisers, Tambusa by name, to renew negotiations for peace. What followed is best told in Mr. Theal's own words :—

" Upon Tambusa's arrival, he and his servant Kombazana were made prisoners, and, contrary to all law and justice, were brought to trial before a court-martial Tambusa, finding himself in the hands of those who were determined on his death, acted with the utmost calmness and dignity. He did not deny the truth of Panda's assertions, but said he was not there to defend himself ; he had come as an envoy from a great chief to arrange terms of peace. He scorned to ask mercy for himself, but de- manded the release of his servant who, he said, was obliged to obey orders given to him. Kombazana, on his part, dis- played equal pride by refusing to be separated from his master -even in death. They were both condemned to be executed. When the sentence was pronounced, Mr. Pretorius spoke to the prisoners of God, the Almighty Master, before whose judg- ment-seat they must soon appear, and besought them to pray to Him for pardon of their sins while yet there was time. Tambusa answered that he had but one master; that it was his duty to remain faithful to Dingan to the last moment of his life ; and that if he did this, the great chief of whom Mr. Pretorius spoke .could not fail to be satisfied with his conduct."

The British Government long refused to treat Natal as a Colony, and at length a Republic was formed in the district. The intervention of the Government was fitful and irritating, and the relations between the Colonists and the Imperial authorities were never satisfactory. At length, in 1847, after an enormous influx of natives into Natal, the Government settled them all over the country among the farmers, dispos- sessing all among the latter who had not been in continuous occupation of their farms during the last twelve months, although this had been rendered impossible in many instances by the disturbed state of the country. The farmers were a plain, religious people, chiefly of Ditch extraction, much resembling the Puritans in their ways of thought, and with little or no knowledge of any book but the Bible (character- istics still strongly exhibited in the Transvaal, according to recent travellers) and they not unnaturally compared them- selves to the Israelites in Egypt, and decided to emigrate in a body, and establish an independent settlement north of the Orange River; and this they successfully accomplished.

Few references occur to persons well known out of South Africa, except, of course, to the successive Governors, and occasionally to the famous missionaries, Moffat and Living- stone. There is, however, a very useful appendix ostensibly relating to books referring to the period embraced in the present volume; but also including many of later date, as, for .example, Frank Oates' work on Matabeleland. The scope and value of each book mentioned are summed up in a few lines. A well-arranged and very fall subject-index closes a work which we cannot but regard as of exceptional interest especially at the present .moment, when African affairs are of each pressing importance to Europe, and to England in .particular.