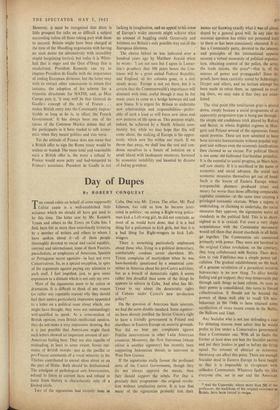 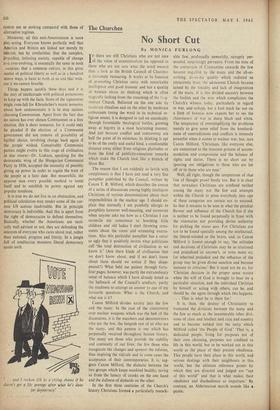 By ROBERT CONQUEST Most of the signatories seem to be critics or dramatists. It is difficult to think of any reason (or rather any reputable reason) why they should feel their names particularly impressive appended to a letter on a political issue about which, one might have thought, they were not outstandingly well-qualified to speak. As a cross-section of British opinion, even British intellectual opinion, they do not make a very impressive showing. But it is just possible that Americans might think such letters showed an important amount of anti- American feeling here. They are also capable of misleading, at least to some extent, Soviet esti- mates of British morale—just as the pacifist or pro-Fascist sentiments of a vocal minority in the Thirties contributed to unreal ideas about us on the part of Hitler. Both should be disillusioned. The amalgam of pathological anti-Americanism, refusal to listen to current facts and refusal to learn from history is characteristic only of a limited circle.

Two of the signatories had recently been in Cuba. One was Mr. l'ynan. The other, Mr. Paul Johnson, has told us how he became inter- ested in politics: on seeing a Right-wing police- man kick a Left-wing girl, he did not conclude, as most of us would have done, that it is a bad thing for a policeman to kick girls, but that it is a bad thing for Right-wingers to kick Left- wingers.

There is something particularly unpleasant about those who, living in a political democracy, comfortably condone terror elsewhere. Mr. Tynan complains of martyrdom when he was ham-handedly questioned by a senatorial com- mittee in America about his pro-Castro activities; but as a breach of democratic rights it seems rather less dreadful than some of the things he appears to admire in Cuba. And what has Mr. Tynan to say about the democratic rights of Cubans under Castro's new no-election policy?

On the question of American State interests, we find the same double standard. Some signator- ies have already justified the Soviet Union's right to have a friendly government in Poland and elsewhere in Eastern Europe on security grounds. Nor did we hear any complaints against Fidelist interventions in other Latin American countries. Moreover, the New Statesman (whose editor is another signatory) has recently been supporting Indonesian threats to intervene in West New Guinea.

If the signatories really favour the professed aims of the Castro Government, though they do not always approve the means, then they should support the rebels. For that is precisely their programme—the original revolu- tion without totalitarian terror. It, is true that many of the signatories probably lent their names not knowing exactly what it was all about. duped by a general good will. In any case the essential question has either not presented itself to them or has been consciously obscured. It is: has a Community party, devoted to the interests and principles of the international apparat. secured a virtual monopoly of political organisa tion, obtaining control of the police, the army the trade unions, the press*—that is, of the sources of power and propaganda? Since tht. proofs have been carefully stated by Schlesinger Draper and others, and no serious attempt ha. been made to rebut them, as opposed to evad- ing them, we may take it that they are estab- lished.

The vital point (the totalitarian grip) is played down, simply because a social programme of an apparently progressive type is being put through: the simple old confidence trick played by Rakosi and Beirut, in whose frightful regimes in Hun- gary and Poland several of the signatories found equal promise. These are now admitted to have been terrorist bureaucracies without popular sup- port and without even the economic justifications then claimed as an excuse. For political liberty is not some old-fashioned Garibaldian prejudice. It is the essential to social progress, as Marx him- self saw clearly. If it is sacrificed in the name of economic and social advance, the social and economic measures themselves get out of hand. Such is the lesson of Eastern Europe where irresponsible planners produced crises and misery far worse than those afflicting comparable capitalist countries—at the same time creating a privileged economic stratum. When a regime is undertaking, or claiming to undertake, the social measures they approve, the signatories waive all standards in the political field. This is as short- sighted as it is cynical. For even a very slight acquaintance with the Communist movement would tell them that decent standards in all fields go together. The Communists arc concerned primarily with power. They were not involved in the original Cuban revolution; on the contrary, they long collaborated with Batista. Their deci- sion to ride Fidelismo was a simple power cal- culation. The gradual establishment on the back of a genuine revolution of a parasitical terrorist bureaucracy is no new thing. To allay hostile feeling and get support, they may temporarily put through such things as land reform. As soon as their power is consolidated, this turns to forced collectivisation. It should not be beyond the powers of those well able to recall US mis- behaviour in the 1900s to have retained some recollection of more recent events in the Baltic, the Balkans and Tibet.

Any Socialist who is not just defending a case for debating reasons must admit that he would prefer to live under a Conservative government than a Communist one. With all its faults the former at least does not ban the Socialist parties and put their leaders in gaol or before the firing squad. No amount of abstract or economic theorising can affect this point. There arc enough Socialist dead in Eastern Europe to have taught us that it is impossible to co-operate with orthodox Communists. Whatever faults we, like everyone else, see in our and the American

And the University, where more than 200 of the professors, the backbone of the original resistance to Batista, have been forced to resign.

system are as nothing compared with those of alternative regimes.

Moreover, all this anti-Americanism is mere play-acting. Everyone knows perfectly well that America and Britain are linked not merely by interest, but by similarities; that the complex, imperfect, irritating society, capable of change and ever-evolving, is essentially the same in both ountries; that a common culture, in this great matter of political liberty as well as in 3 hundred minor ways, is basic to both of us and that with- out it we cannot breathe.

Things happen quickly these days and it is the duty of intellectuals with political pretensions to keep up with the facts. Some of the signatories might even fall for Khrushchev's recent nonsense about how undemocratic it is to stop nations choosing Communism. Apart from the fact that no nation has ever chosen Communism in a free election, this is sheer nonsense, for it could only be pleaded if the election of a Communist government did not remove all possibility of further choice, involving change back again if the people wished. Conceivably Communist parties might evolve to this stage of civilisation in due course--Dr. Liukacs, speaking for the democratic wing of the Hungarian Communist Party in 1956, accepted the necessity of possibly giving up power in order to regain the trust of the people at a later date But meanwhile, the apparat uses every possible method to instal itself and to establish its power against any popular revulsion.

It is true we do not live in an abstraction, and political calculation may render some of the cur- rent US actions inadvisable. But in principle democracy is indivisible. And this is apart from the right of democracies to defend themselves. Basically, whether the Americans are tacti- cally well advised or not, they are defending the interests of everyone who cares about real, rather than national, progress and liberty. In a jungle full of totalitarian monsters liberal democracy needs teeth.

. . and I reckon it'll be a crying shame if he doesn't get a life peerage after what he's done for democracy.'