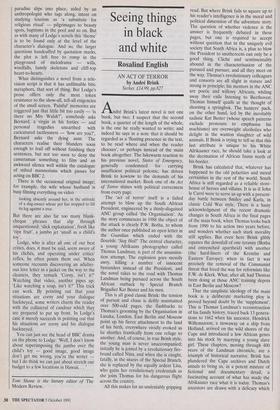 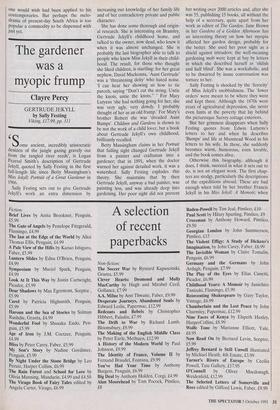 Seeing things in black and white

AN ACT OF TERROR by Andre Brink Secker, £14.99, pp.827 Aidre Brink's latest novel is not one book, but two. I suspect that the second book, a quarter of the length of the whole, is the one he really wanted to write; and indeed he says in a note that it should be regarded as a 'floating presence in the text, to be read where and when the reader chooses', or perhaps instead of the main book altogether. The lukewarm reaction to his previous novel, States of Emergency, generally condemned for carrying insufficient political polemic, has driven Brink to kowtow to the demands of his international market. Book one of An Act of Terror shines with political correctness from every page.

The 'act of terror' itself is a failed attempt to blow up the South African President, engineered by a thinly-disguised ANC group called 'the Organisation'. As the story commences in 1988 the object of the attack is clearly P.W. Botha, to whom the author once published an open letter in the Guardian which ended with the flourish: `Sieg Heil!' The central character, a young Afrikaans photographer called Thomas Landman, is part of the assassina- tion attempt. The explosion goes messily awry, killing a number of innocent bystanders instead of the President, and the novel takes to the road with Thomas Landman being pursued across the South African outback by Special Branch Brigadier Kat Bester and his men.

This is all good classic Brink: the tension of pursuit and chase is deftly maintained over 500-odd pages, the flashbacks to Thomas's grooming by the Organisation in Lusaka, London, East Berlin and Moscow point up his fierce attachment to the land of his birth, everywhere vividly evoked as he shuttles frantically from one refuge to another. And, of course, in true Brink style, the young man is never unaccompanied; initially he is joined by a revolutionary fire- brand called Nina, and when she is caught, fatally, in the snares of the Special Branch, she is replaced by the equally ardent Lisa, who gains her revolutionary credentials as she joins Thomas for his dangerous flight across the country.

All this makes for an undeniably gripping read. But where Brink fails to square up to his reader's intelligence is in the moral and political dimension of the adventure story. The question of whether violence is the answer is frequently debated in these pages, but one is required to accept without question that in the uniquely evil society that South Africa is, a plan to blow the President to smithereens can only be a good thing. Cliché and sentimentality abound in the characterisation of the pursued and pursuer, and all they meet on the way. Thomas's revolutionary colleagues and consorts are all slight in stature and strong in principle; his mentors in the ANC are poetic and willowy Africans, whiling away their exile listening to Beethoven; Thomas himself quails at the thought of shooting a springbok. The hunters' pack, on the other hand, led by the inevitably sadistic Kat Bester (whose speech patterns exclude pronouns to emphasise his machismo) are overweight alcoholics who delight in the wanton slaughter of wild animals. If Brink is trying to tell us that this last attribute is unique to his White Afrikaaner race, he should take a look at the decimation of African fauna north of his border.

Brink has calculated that, whatever has happened to the old polarities and moral certainties in the rest of the world, South Africa is still regarded as a reliable store- house of heroes and villains. It is as if John le Carre were to serve us up with a present- day battle between Smiley and Karla, in classic Cold War style. There is a hasty acknowledgment of the recent dramatic changes in South Africa in the final pages of the main book, when Thomas looks back from 1990 to his action two years before, and wonders whether such stark morality still applies. But even here Brink glibly equates the downfall of one tyranny (Botha and entrenched apartheid) with another (the hard-liners of the Kremlin and Eastern Europe); when in fact it was precisely the removal of the Communist threat that freed the way for reformists like F.W. de Klerk. What, after all, had Thomas been doing at those ANC training depots in East Berlin and Moscow?

That the simplistic ideology of the main book is a deliberate marketing ploy is proved beyond doubt by the 'supplement'. This is Thomas Landman's reconstruction of his family history, traced back 13 genera- tions to 1662 when his ancestor, Hendrick Willemszoon, a stowaway on a ship from Holland, arrived on the wild shores of the Cape and introduced a few African genes into his stock by marrying a young slave girl. These chapters, moving through 400 years of the Landman chronicle, are a triumph of historical narrative. Brink has plundered the Cape archives and Dutch annals to bring us, in a potent mixture of fictional and documentary detail, a fascinating account of what has made the Afrikaaner race what it is today. Thomas's ancestors are drawn with a delicacy which one would wish had been applied to his contemporaries. But perhaps the melo- drama of present-day South Africa is too popular a commodity to be dispensed with just yet.