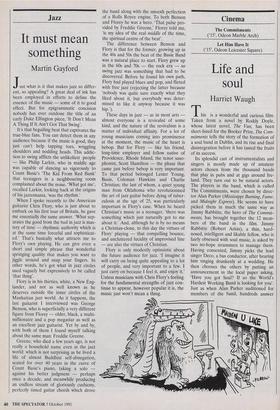 It must mean something

Just what is it that makes jazz so differ- ent, so appealing? A great deal of ink has been employed in efforts to define the essence of the music — some of it to good effect. But for epigrammatic concision nobody has ever outdone the title of an early Duke Ellington piece, 'It Don't Mean A Thing lilt Ain't Got That Swing'.

It's that beguiling beat that captivates the true-blue fans. You can detect them in any audience because if the music is good, they just can't help tapping toes, wriggling shoulders and nodding heads. This addic- tion to swing afflicts the unlikeliest people — like Philip Larkin, who in middle age was capable of dancing so vigorously to Count Basic's 'The Kid From Red Bank' that teenagers in a neighbouring room complained about the noise. 'What got me', recalled Larkin, looking back at the origins of his jazzomania, 'was the rhythm.'

When I spoke recently to the American guitarist Chris Flory, who is just about to embark on his first tour of Britain, he gave me essentially the same answer. 'What sep- arates the good from the bad in jazz is mas- tery of time.— rhythmic authority which is at the same time forceful and sophisticat- ed.' That's basically what attracts me to Flory's own playing. He can give even a short and simple phrase that wonderful springing quality that makes you want to jiggle around and snap your fingers. In other words, he's got what in jazz circles used vaguely but expressively to be called 'that thing'.

Flory is in his thirties, white, a New Eng- lander, and not as well known as he deserves outside the inner circles of the Manhattan jazz world. As it happens, the last guitarist I interviewed was George Benson, who is superficially a very different figure from Florey — older, black, a multi- millionaire and a pop megastar as well as an excellent jazz guitarist. Yet by and by, with both of them I found myself talking about the same man: Freddie Greene.

Greene, who died a few years ago, is not really a household name even in the jazz world: which is not surprising as he lived a life of almost Buddhist self-abnegation, seated for over 40 years in the curve of Count Basic's piano, taking a solo — against his better judgment — perhaps once a decade, and meanwhile producing an endless stream of gloriously cushiony, perfectly timed guitar chords which drove the band along with the smooth perfection of a Rolls Royce engine. To both Benson and Florey he was a hero. 'That pulse pro- vided by Freddie Greene,' Florey told me, 'is my idea of the real middle of the time, the spiritual centre of the beat'.

The difference between Benson and Flory is that for the former, growing up in the 40s and 50s the beat of the Basic Band was a natural place to start. Flory grew up in the 60s and 70s — the rock era — so swing jazz was something that had to be discovered. Before he found his own path, Flory had played blues and pop, and flirted with free jazz (rejecting the latter because 'nobody was quite sure exactly what they liked about it, but everybody was deter- mined to like it anyway because it was hip.').

These days in jazz — as in most arts — almost everyone is a revivalist of some kind, and the nature of the revivalism is a matter of individual affinity. For a lot of young musicians coming into prominence at the moment, the music of the heart is bebop. But for Flory — like his friend, long-time employer and fellow native of Providence, Rhode Island, the tenor saxo- phonist, Scott Hamilton — the phase that came just before bebop is very important. To that period belonged Lester Young, Basic, Coleman Hawkins and Charlie Christian; the last of whom, a quiet ypung man from Oklahoma who revolutionised the art of jazz guitar before dying of tuber- culosis at the age of 25, was particularly important in Flory's case. When he heard Christian's music as a teenager, 'there was something which just naturally got to me about it.' And, although he is by no means a Christian-clone, to this day the virtues of Flory' playing — that compelling bounce, and uncluttered lucidity of improvised line — are also the virtues of Christian.

Flory is only modestly optimistic about the future audience for jazz. 'I imagine it will carry on being quite appealing to a lot of people, and very important to a few. I just carry on because I feel it, and enjoy it.' Unless musicians with Chris Flory's feeling for the fundamental strengths of jazz con- tinue to appear, however popular it is, the music just won't mean a thing.