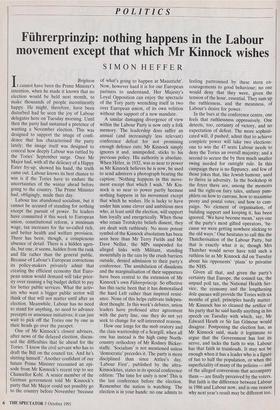 Fiihrerprinzip: nothing happens in the Labour movement except that which Mr Kinnock wishes

intention, when he made it known that no election would be held next month, to make thousands of people incontinently happy. He might, therefore, have been disturbed had he seen the joy of Labour delegates here on Tuesday morning. Until then the party had sustained a pretence of wanting a November election. This was designed to support the image of confi- dence that has characterised the party lately; the image itself was designed to conceal how deeply Labour was rattled by the Tories' September surge. Once Mr Major had, with all the delicacy of a Happy Eater fry-up, showed his hand, the truth came out. Labour knows its best chance to win is if the Tories have to endure the uncertainties of the winter ahead before going to the country. The Prime Minister had, obligingly, made their day.

Labour has abandoned socialism, but it cannot be accused of standing for nothing except the pursuit of power. Its leaders have committed it this week to European union, constitutional reform, a minimum wage, tax increases for the so-called rich, and better health and welfare provision. There has been, though, a conspicuous absence of detail. There is a hidden agen- da, but one, it seems, hidden from the rank and file rather than the general public. Because of Labour's European convictions its policy-makers privately admit that creating the efficient economy that Euro- pean union would demand will take prior- ity over running a big budget deficit to pay for better public services. What the activ- ists who want a bigger public sector will think of that will not matter until after an election. Meanwhile, Labour has no need to stand for anything, no need to advance precepts or announce initiatives; it can just wait to pick off the Tories one by one as their heads go over the parapet.

One of Mr Kinnock's closest advisers, after news of the delayed election, discus- sed the difficulties that lie ahead for the Tories. 'I know the civil servant who has to draft the Bill on the council tax. And he's shitting himself.' Another confidant of our future Prime Minister recounted an epi- sode from Mr Kinnock's recent trip to see Chancellor Kohl. A senior member of the German government told Mr Kinnock's party that Mr Major could not possibly go to the country before November 'because of what's going to happen at Maastricht'. Now, however hard it is for our European partners to understand, Her Majesty's Loyal Opposition can enjoy the spectacle of the Tory party wrenching itself in two over European union, of its own volition without the support of a new mandate.

A similar damaging divergence of view within the Labour Party is now only a folk memory. The leadership does suffer an annual (and increasingly less relevant) conference defeat for not promising enough defence cuts; Mr Kinnock simply ignores it and, unimpeded, sticks to his previous policy. His authority is absolute. When Hitler, in 1932, was as near to power as Mr Kinnock believes he is now, he used to send admirers a photograph bearing the caption: 'Nothing happens in this move- ment except that which I wish.' Mr Kin- nock is so near to power partly because nothing happens in his movement except that which he wishes. He is lucky to have under him some clever and ambitious men who, at least until the election, will support him loyally and energetically. When those who retain Trotskyite beliefs dissent, they are dealt with ruthlessly. No more potent symbol of the Kinnock absolutism has been seen here than Mr Terry Fields and Mr Dave Nellist, the MPs suspended for alleged links with Militant, standing mournfully in the rain by the crush barriers outside, denied admission to their party's conference. The annihilation of dissidents and the marginalisation of their supporters have been central to the extension of Mr Kinnock's own Fiihrerprinzip. So effective has this tactic been that it has demoralised the hard Left rather than inspired resist- ance. None of this helps cultivate indepen- dent thought. In this week's debates, union leaders have professed utter agreement with the party line, one they do not yet seek to change for self-interested reasons.

How one longs for the mob oratory and the class warriorship of a Scargill, when all one has instead is the high camp North- country orthodoxy of Mr Rodney Bicker- staffe. 'Socialism' is not mentioned unless 'democratic' precedes it. The party is more disciplined than since Attlee's day. 'Labour First', published by the ultra- Kinnockites, states in its special conference edition: 'The time for unity is now! This is the last conference before the election. Remember the nation is watching. The election is in your hands: no one admits to feeling partronised by these stern en- couragements to good behaviour; no one would deny that they were, given the tension of the hour, essential. They sum up the ruthlesness, and the meanness, of Labour's desire for power.

In the bars at the conference centre, one feels that ruthlessness oppressively. One detects, too, certainty of victory, and no expectation of defeat. The more sophisti- cated will, if pushed, admit that to achieve complete power will take two elections: one to win the 47 seats Labour needs to deny the Tories an overall majority; and a second to secure the by then much smaller swing needed for outright rule. In this campaign there is no flippancy, and few of those jokes that, like Jewish humour, used to thrive in adversity. In the bookshop in the foyer there are, among the memoirs and the right-on fairy tales, unftissy pam- phlets on how to canvass, how to maximise proxy and postal votes, and how to cam- paign. No element of organisation, of building support and keeping it, has been ignored. 'We have become mean,' says one of the party's most gifted operators, 'be- cause we were getting nowhere sticking to the old ways.' One hesitates to call this the Thatcherisation of the Labour Party, but that is exactly what it is; though Mrs Thatcher would never have told such a ruthless lie as Mr Kinnock did on Tuesday about his opponents' plans' to privatise the NHS.

Given all that, and given the party's certainty that Europe, the council tax, the unpaid poll tax, the National Health Ser- vice, the economy and the lengthening dole queues will provide the Tories with six months of grief, principles hardly matter.

Mr Kinnock has so cleaned the artifice of his party that he said hardly anything in his speech on Tuesday with which, say, Mr Edward Heath or Sir Ian Gilmour would disagree. Postponing the election has, as Mr Kinnock said, made it legitimate to argue that the Government has lost its nerve, and lacks the faith to win. Labour has that faith in trainloads. It may not be enough when it has a leader who is a figure of fun to half the population, or when the superficiality of many of the policies — and of the alleged conversions that accompany them — are finally perceived by the voters. But faith is the difference between Labour in 1986 and Labour now, and is one reason why next year's result may be different too.