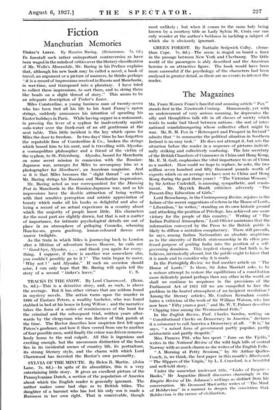 is a detective story, and, as such, is above the average. But it has other virtues that are seldom found in mystery novels. The action turns upon the murder in 1896 of Eustace Peters, a wealthy bachelor, who was found stabbed in bed at his house in Long Wilton ; and the narrative takes the form of a series of reminiscences of the hunt for the criminal and the subsequent trial, written years after- wards by the clergyman who was Rector of that parish at the time. The Rector describes how suspicion first fell upon Peters's gardener, and how it then veered from one to another of four possible men, until finally the crime was driven remorse- lessly home to the real culprit. All this is ingenious and exciting enough, but the uncommon distinction of the book ties in its incidental scenes of country life, its portraiture, its strong literary style, and the charm with which Lord Charnwood has invested the Rector's own personality.