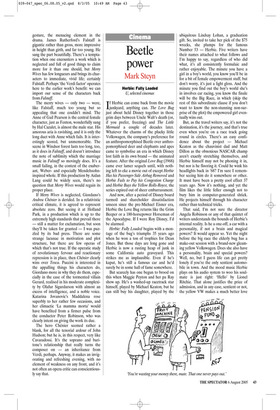 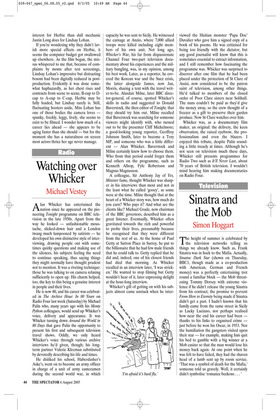 Herbie: Fully Loaded U, selected cinemas If Herbie can come back from the movie junkyard, anything can. The Love Bug just about held Disney together in those grim days between Uncle Walt’s death (or, if you prefer, freezing) and The Little Mermaid a couple of decades later. Whatever the charms of the plucky little Volkswagen, the company’s preference for an anthropomorphised Beetle over anthropomorphised deer and elephants and apes came to symbolise an era in which Disney lost faith in its own brand — the animated feature. After the original Love Bug (1968) came ever lamer sequels until, with nothing left to eke a movie out of except Herbie Has his Passenger-Side Airbag Removed and Herbie Fails to Pay his Congestion Charge and Herbie Buys the Yellow Rolls-Royce, the series expired out of sheer embarrassment.

And now, after a period of Disney board turmoil and shareholder dissatisfaction unseen since the pre-Michael Eisner era, Herbie the Love Bug returns like the Grim Beeper or a 180-horsepower Horseman of the Apocalypse. If I were Roy Disney, I’d be alarmed.

Herbie: Fully Loaded begins with a montage of the bug’s triumphs 35 years ago when he won a ton of trophies for Dean Jones. But those days are long gone and Herbie is now a rusting heap of junk in some California auto graveyard. This strikes me as implausible. Even if he’s kaput, he’s still a famous car and he’d surely be in some hall of fame somewhere.

But scarcely has one begun to brood on this when Maggie Peyton and her pa Ray show up. He’s a washed-up racetrack star himself, played by Michael Keaton, but he can still buy his daughter, played by the ubiquitous Lindsay Lohan, a graduation gift. So, invited to take her pick of the $75 wrecks, she plumps for the famous Number 53 — Herbie. Five writers have their names attached to what follows and I’m happy to say, regardless of who did what, it’s all consistently formulaic and rather enjoyable. The minute you have a girl in a boy’s world, you know you’ll be in for a bit of female empowerment stuff, but don’t worry, it’s just a light gloss. And the minute you find out the boy’s world she’s in involves car racing, you know the finale will be the Big Race, in which (skip the rest of this subordinate clause if you don’t want to know the non-stunning non-surprise of the plot) the empowered girl eventually wins out.

But, as the travel writers say, it’s not the destination, it’s the journey, and that’s true even when you’re on a race track going round in circles. There’s an easy confidence about the project — Michael Keaton as the chauvinist dad and Matt Dillon as the obnoxious NASCAR champ aren’t exactly stretching themselves, and Herbie himself may not be phoning it in, but nor is he flooring it. Could he wink his headlights back in ’68? I’m sure I remember seeing him do it somewhere or other. It must have been a pretty cool effect 37 years ago. Now it’s nothing, and yet the film likes the little feller enough not to bury him in computer-generated shtick. He projects himself through his character rather than technical tricks.

That said, I’m not sure the director Angela Robinson or any of that quintet of writers understands the bounds of Herbie’s internal reality. Is he a one-off, a car with a personality, if not a brain and magical powers? It would appear so. Yet the night before the big race the elderly bug has a make-out session with a brand-new gleaming yellow Volkswagen. Does she also have a personality, brain and special powers? Well, no, but I guess life can get pretty lonely if you’re the only sentient automobile in town. And the mood music Herbie plays on his audio system to woo his soulmate is just right: ‘Hello’ by Lionel Ritchie. That alone justifies the price of admission, and in any case, sentient or not, the yellow VW makes a much better love interest for Herbie than dull mechanic Justin Long does for Lindsay Lohan.

If you’re wondering why they didn’t lavish more special effects on Herbie, it seems the computer budget got swallowed up elsewhere. As the film began, the missus whispered to me that, because of complaints by moms after test screenings, Lindsay Lohan’s impressive but distracting bosom had been digitally reduced in postproduction. Evidently it was done somewhat haphazardly, as her chest rises and contracts from scene to scene, B-cup to Dcup to A-cup to C-cup. Herbie may be fully loaded, but Lindsay rarely is. Still, fluctuating hooters aside, Miss Lohan has one of those bodies the camera loves spunky, freckly, leggy, lively, she seems to exist to be filmed. I wonder how much of a career lies ahead — she appears to be aging faster than she should — but for the moment she has a naturalness on screen most actors thrice her age never manage.