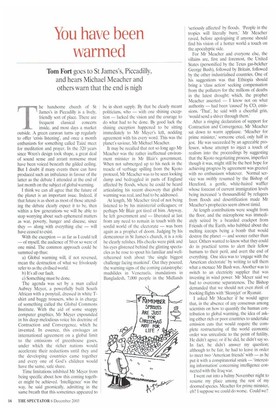 You have been warmed

Tom Fort goes to St James's, Piccadilly, and hears Michael Meacher and others warn that the end is nigh The handsome church of St James's in Piccadilly is a lively, friendly sort of place. There are frequent classical concerts inside, and most days a market outside. A green caravan turns up regularly to offer 'crisis listening', and once a month enthusiasts for something called Taize meet for meditation and prayer. In the 320 years since Wren's design took shape, a great deal of sound sense and arrant nonsense must have been voiced beneath the gilded ceiling. But I doubt if many events there can have produced such an imbalance in favour of the latter as the debate I attended at the end of last month on the subject of global warming.

I think we can all agree that the future of the planet is an important issue. Indeed, if that future is as short as most of those attending the debate clearly expect it to be, then within a few generations we will be able to stop worrying about such ephemeral matters as war, poverty, hunger and disease, since they — along with everything else — will have ceased to exist.

With the exception — as far as I could tell — of myself, the audience of 50 or so were of one mind. The common approach could be summed up thus: a) Global warming will, if not reversed, mean the destruction of what we frivolously refer to as the civilised world.

c) Something must be done.

The agenda was set by a man called Aubrey Meyer, a powerfully built South African with a ponytail, dressed in white Tshirt and baggy trousers, who is in charge of something called the Global Commons Institute. With the aid of some snappy computer graphics, Mr Meyer expounded in his deep melodious voice his doctrine of Contraction and Convergence, which he invented. In essence, this envisages an international agreement on a global limit to the emissions of greenhouse gases, under which the richer nations would accelerate their reductions until they and the developing countries came together and every one of God's children would have the same, safe share.

Time limitations inhibited Mr Meyer trom being specific about how this coming together might be achieved. 'Intelligence' was the way, he said griomically, admitting in the same breath that this sometimes appeared to be in short supply. By that he clearly meant politicians, who — with one shining exception — lacked the vision and the courage to do what had to be done. By good luck the shining exception happened to be sitting immediately to Mr Meyer's left, nodding agreement with his every word. This was the planet's saviour, Mr Michael Meacher.

It may be recalled that not so long ago Mr Meacher was the rather ineffectual environment minister in Mr Blair's government. When not submerged up to his neck in the treacle of verbiage spilling from the Kyoto protocol, Mr Meacher was to be seen looking damp and bedraggled in parts of England affected by floods, where he could be heard articulating his recent discovery that global warming was real, and had to be addressed.

At length, Mr Meacher tired of not being listened to by his ministerial colleagues; or perhaps Mr Blair got tired of him. Anyway, he left government and — liberated at last from any need to remain in touch with the sordid world of the electorate — was born again as a prophet of doom. Judging by his demeanour in St James's church, it is a role he clearly relishes. His cheeks were pink and his eyes glistened behind the glinting spectacles as he rose to spout his familiar and wellrehearsed tosh about 'the single biggest challenge facing mankind'. Out they poured, the warning signs of the coming catastrophe: mudslides in Venezuela, inundations in Bangladesh, 7,000 people in the Midlands 'seriously affected' by floods. 'People in the tropics will literally burn,' Mr Meacher raved, before apologising if anyone should find his vision of a hotter world a touch on the apocalyptic side.

For Mr Meacher and everyone else, the villains are, first and foremost, the United States (personified by the Texas gas-belcher George Bush), followed by Britain, followed by the other industrialised countries. One of his suggestions was that Ethiopia should bring a 'class action' seeking compensation from the polluters for the millions of deaths in the latest drought; which, the prophet Meacher asserted — I know not on what authority — had been 'caused' by CO, emissions. 'That', he said with a cheerful grin, 'would send a shiver through them.'

After a ringing declaration of support for Contraction and Convergence, Mr Meacher sat down to warm applause. `Meacher for prime minister,' someone cried, only half in jest. He was succeeded by an agreeable professor, whose attempt to inject a touch of realism into the proceedings by suggesting that the Kyoto negotiating process, imperfect though it was, might still be the best hope for achieving progress by agreement was greeted with no enthusiasm whatever. Normal service was swiftly resumed by the Bishop of Hereford, a gentle, white-haired waffler whose forecast of current immigration levels being increased 'a thousandfold' by refugees from floods and desertification made Mr Meacher's prophecies seem almost timid.

At length contributions were sought from the floor, and the microphone was immediately seized by a bearded crackpot from Friends of the Earth, who babbled about the melting icecaps being a bomb that would destroy the planet — and sooner rather than later. Others wanted to know what they could do in practical terms to alert their fellow humans to their peril, and avert the end of everything. One idea was to 'engage with the American electorate' by writing to tell them what a menace Mr Bush was. Another was to switch to an electricity supplier that was investing in wind power. Mr Meyer said we had to overcome separateness. The Bishop demanded that we should not even think of booking flights with `Sleasyjef or Ryanair.

I asked Mr Meacher if he would agree that, in the absence of any consensus among scientists on how to quantify the human contribution to global warming, the idea of asking either rich or poor countries to undertake emission cuts that would require the complete restructuring of the world economic order was unrealistic to the point of futility. He didn't agree; or if he did, he didn't say so. In fact, he didn't answer my question; although to be fair, he had to leave in order to meet two 'American friends' with — as he put it with a conspiratorial smirk — 'interesting information' concerning intelligence connected with the Iraq war.

I went out into a balmy November night to resume my place among the rest of my doomed species. Meacher for prime minister, eh? I suppose we could do worse. Could we?