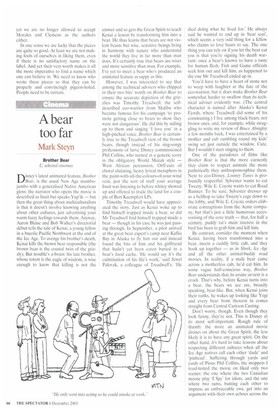 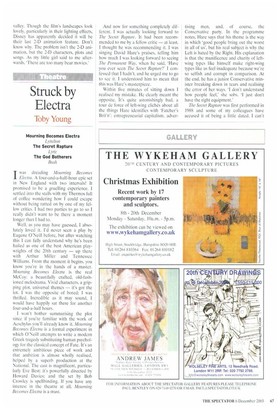 A bear too far

Disney's latest animated feature, Brother Bear, is the usual New Age mumbojumbo with a generalised Native American gloss: the narrator who opens the movie is described as Inuit but speaks Yup'ik — but then the great thing about multiculturalism is that it doesn't involve knowing anything about other cultures, just advertising your warm fuzzy feelings towards them. Anyway, Aaron Blaise and Bob Walker's directorial debut tells the tale of Kenai, a young fellow in a bucolic Pacific Northwest at the end of the Ice Age. To avenge his brother's death, Kenai kills the brown bear responsible (the brown bear is the coastal twin of the grizzly). But trouble's a-bruin: his late brother, whose totem is the eagle of wisdom, is wise enough to know that killing is not the

answer and so gets the Great Spirit to teach Kenai a lesson by transforming him into a bear. He thus learns that bears are not violent beasts but wise, sensitive beings living in harmony with nature who understand the world they live in far more than man does. It's certainly true that bears are wiser and more sensitive than man. For example, I've yet to meet a bear who's produced an ! animated feature as sappy as this.

However, I was interested to see that among the technical advisers who chipped in their two bits' worth on Brother Bear to ensure the accurate depiction of the grizzlies was Timothy Treadwell, the selfdescribed eco-warrior from Malibu who became famous for his campaign to promote getting close to bears to show they were not dangerous'. He did this by sidling up to them and singing 'I love you' in a high-pitched voice. Brother Bear is certainly true to the Treadwell view of the brown bears, though instead of his sing-songy professions of lurve Disney commissioned Phil Collins, who turned in a generic score in the obligatory World Muzak style — West African percussion, Orff-cuts of choral ululating, heavy lyrical metaphors in the paint-with-all-the-colours-of-your-wind vein, just the sort of stuff your average Inuit was listening to before whitey showed up and offered to trade the land for a couple of Bert Kaempfert LPs.

Timothy Treadwell would have appreciated the story. Just as Kenai woke up to find himself trapped inside a bear, so did Mr Treadwell find himself trapped inside a bear — though in his case he was just passing through. In September, a pilot arrived at the great bear expert's camp near Kaflia Bay in Alaska to fly him out and instead found the bits of him and his girlfriend that hadn't yet been eaten buried in a bear's food cache. 'He would say it's the culmination of his life's work,' said Jewel Palovak, a colleague of Treadwell's. 'He died doing what he lived for.' He always said he wanted to end up in 'hear seat', which seems a very odd thing for a fellow who claims to love bears to say. The one thing you can rely on if you let the bear eat you is that you're signing his death warrant: once a bear's known to have a taste for human flesh. Fish and Game officials seek him out and kill him, as happened to the one Mr Treadwell ended up in.

You'd have to have a heart of stone not to weep with laughter at the fate of the eco-warrior, but it does make Brother Bear somewhat harder to swallow than its technical adviser evidently was. (The central character is named after Alaska's Kenai Fjords, where Treadwell did some of his communing.) I live among black bears, not brown ones, and, for example, while struggling to write my review of Bruce Almighty a few months back, I was entertained by a mother and cub rambling round my kids' swing set just outside the window. Cute. But I wouldn't start singing to them.

One of the paradoxes of films like Brother Bear is that the more earnestly they claim to respect animals the more pathetically they anthropomorphise them. Next to eco-Disney, Looney Tunes is profoundly respectful: Sylvester wants to eat Tweety, Wile E. Coyote wants to eat Road Runner. To he sure, Sylvester dresses up as a bellhop to take Tweety's cage down to the lobby. and Wile E. Coyote orders elaborate contraptions from the Acme company, but that's just a little humorous accessorising of the core truth — that, for half a century, puddy tat's main interest in the bird has been to grab him and kill him.

By contrast, consider the moment when Kenai, having been transformed into a bear, meets a cuddly little cub, and they hook up together — as in Shrek, Ice Age and all the other animal-buddy road movies. In reality, if a male bear came across a motherless cub, he'd eat him. In some vague half-conscious way, Brother Bear understands that its ursine ur-text is a crock. That's why, before Kenai turns into a bear, the bears we see are, broadly speaking, bear-like. But. when Kenai joins their ranks, he wakes up looking like Yogi and every bear from thereon in comes straight from Central Cartoon Casting.

Don't worry, though. Even though they look funny, they're not. This is Disney at its most self-important. Rough rule of thumb: the more an animated movie drones on about the Great Spirit, the less likely it is to have any great spirit. On the other hand, it's hard to take lessons about respecting different cultures when all the Ice Age natives call each other 'dude' and 'pinhead'. Suffering through yards and yards of Pious Phil Collins, the moppets I road-tested the movie on liked only two scenes: the one where the two Canadian moose play 'I Spy' for idiots, and the one where two rams, butting each other to impress an embraceable ewe, get into an argument with their own echoes across the valley. Though the film's landscapes look lovely, particularly in their lighting effects, Disney has apparently decided it will be their last 2-D animation feature. Don't know why. The problem isn't the 2-D animation, but the 2-D characters, plots and songs. As my little girl said to me afterwards, 'There are too many bear movies.'