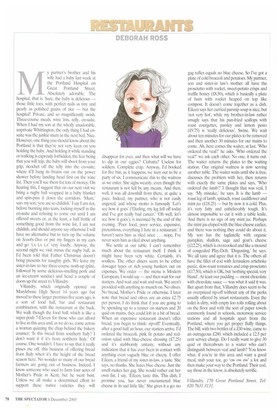 M y partner's brother and his wife had a baby last

week at the Portland Hospital on Great Portland Street. Absolutely adorable. The hospital, that is. Sure, the baby is delicious — those little toes. with perfect nails as tiny and pearly as polished grains of rice — but the hospital! Private, and so magnificently swish. Three-course meals, wine lists, telly, en-suite. When I had my son at the wholly unadorable, unprivate Whittington, the only thing I had ensuite was the junkie mum in the next bed. Nice. However, one thing you should know about the Portland is that they're not very keen on you holding the baby. And holding it while standing or walking is expressly forbidden, the fear being that you will trip, the baby will shoot from your pip, ricochet off the telly into the en-suite, where it'll bang its brains out on the power shower before landing head first on the wine list. Then you'll sue them for lots of money. On hearing this, I suggest that on our next visit we bring a rugby ball wrapped in a baby blanket and spin-pass it down the corridors. 'Mum,' says my son, 'you are so childish.' I say! am not, before bursting into tears, locking myself in the en-suite and refusing to come out until I am offered sweets or, at the least, a half bottle of something good from the wine list. I am not childish, and should anyone say otherwise I will have no alternative but to turn up the volume on Scooby-Doo or put my fingers in my ears and go 'LA LA LA' very loudly. Anyway, the second night we visit minus the rugby ball, as I'd been told that Father Christmas doesn't bring presents for naughty girls. We leave my sister-in-law to her three-course nosh-up (pâté, followed by some delicious-smelling pork and an ice-cream sundae) and head a couple of doors up the street to Villandly.

Villandry, which originally opened on Muylebone High Street 14 years ago but moved to these larger premises five years ago, is a sort of food hall, bar and restaurant combination, with the restaurant at the back. We walk though the food hall, which is like a super-posh 7-Eleven for those who can afford to live in this area and, as we do so, come across a woman quizzing the chap behind the bakery counter: 'Is this bread from southern Italy? I don't want it if it's from northern Italy.' Of course. One wouldn't. I have to say that it really pisses me off, this business of offering bread from Italy when it's the height of the bread season here. No wonder so many of our bread farmers are going out of business, Indeed, I know someone who used to farm four acres of Mother's Pride in Kent, but he went bust. Unless we all make a determined effort to support these native varieties they will disappear for ever, and then what will we have to dip in our eggies? Ciabatta? Useless for soldiers. Complete crap. Anyway, I'd booked for five but, as it happens, we turn out to be a party of six. I communicate this to the waitress as we enter. She sighs wearily, even though the restaurant is not full by any means. And then, well, it was all downhill from there, at quite a pace. Indeed, my partner, who is not easily angered, and whose motto is famously 'Let's see how it goes' (Darling, my leg fell off today and I've got really had cancer,' 'Oh well, let's see how it goes'), is incensed by the end of the evening. 'Poor food, poor service, expensive, pretentious, everything I hate in a restaurant.' I haven't seen him as riled since . . . nope, never seen him as riled about anything.

We settle at our table. I can't remember much about the restaurant itself. I think it might have been very white. Certainly, it's soulless. The other diners seem to be either dowager types or rich young bankers out on expenses. We order the menu is Modem European, I would say and then wait for our starters. And wait and wait and wait. We aren't provided with anything to munch on. No olives. No bread, Mother's Pride or otherwise. I later note that bread and olives are an extra £2.75 per person. I do think that if you are going to be spending up to a tenner on starters and 20 quid on mains, they could lob in a bit of bread. When an expensive restaurant doesn't offer bread, you begin to think: rip-off! Eventually, after a good half an hour, our starters arrive. I'd ordered the broccoli, pink fir potato and redonion salad with blue-cheese dressing (£7.25) and it's stubbornly untasty, without any indication that it has ever been in contact with anything even vaguely blue or cheesy. I offer Eileen, a friend of my sister-in-law, a taste. She says, no thanks, She hates blue cheese. Just the smell makes her gag. She would rather eat her own fist. I say, 'Eileen, taste this. This dish, I promise you, has never encountered blue cheese in its sad little life.' She gives it a go: no

gag reflex equals no blue cheese. So I've got a plate of cold broccoli and potatoes. My partner, son and sister-in law's mother all have the prosciutto with rocket, sweet-potato crisps and truffle honey (8.50), which is basically a plate of ham with rocket heaped on top like compost. It doesn't come together as a dish. Eileen says her curried parsnip soup is nice, but `not very hot', while my brother-in-law rather smugly says that his pan-fried scallops with roast courgettes, parsley and lemon pest° (£9.75) is 'really delicious'. Swine. We wait about ten minutes for our plates to be removed and then another 30 minutes for our mains to come. Ali, here comes the waiter, at last. 'Who ordered the veal?' he asks. 'Who ordered the veal?' we ask each other. No one, it turns out. The waiter returns the plates to the waiting station. Our original waitress is now serving another table. The waiter waits until she is free, discusses the problem with her, then returns with exactly the same plates and says, 'Who ordered the lamb?' I thought that was veal, I say. 'My mistake,' he says. It is the lamb — roast leg of lamb, spinach, roast cauliflower and mint jus (£18.25) — but by now it is cold. Plus, it's very fatty and unbelievably tough. It's almost impossible to cut it with a table knife. And there is no sign of any mint jus. Perhaps the mint jus eloped with the blue cheese earlier, and there was nothing they could do about it. My son has the tagliatelle with organic pumpkin, shallots, sage and goat's cheese (£12.25), which is overcooked and like a mound of congealed Play-Doh. 'Disgusting,' he says. We all taste and agree that it is. The others all have the fillet of cod with Jerusalem artichoke purée, slow-roast tomatoes and crisp prosciutto (£1750), which is OK, but `nothing special, very bland'. At least our pudding — moist chocolate with chocolate sauce — was what it said it was. But apart from that, Villanchy does seem to be an overpriced rip-off without any of the perks usually offered by smart restaurants. Even the toilet is dirty, with empty loo rolls rolling about on the floor and with the sort of paper towels commonly found in schools, motorway service stations and all hospitals apart from the Portland, where you get proper fluffy things. The bill, with two bottles of a £30 wine, came to an outrageous £280, which included a 12.5 per cent service charge. Do I really want to give 30 quid or thereabouts to a waiter who can't distinguish between veal and lamb? You know what, if you're in this area and want a good meal, stub your toe, go 'ow ow ow' a lot and then make your way to the Portland. Their cod, say those in the know, is absolutely terrific.