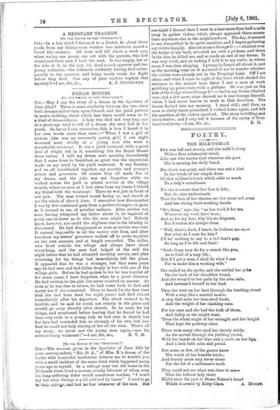 [TO THE EDITOR OP THE "SPECTATOR."] SIII,—May I cap the story of a dream in the Spectator of June 22nd ? There is some similarity between the two, since both dreams rather turn upon Church and the plaid pattern in men's clothing, about which last there would seem to be a kind of dreamishness. A lady who died not very long ago at a great age used to tell of a dream she once had in her youth. So far as I can remember, this is how I heard it in her own words more than once :—" When I was a girl of sixteen [she was an extremely pretty girl] I one night dreamed most vividly of a young man who wore a remarkable waistcoat. It was a plaid waistcoat with a great deal of bright red in it, something like the Royal Stuart dress tartan. I told my dream next morning immediately that I came down to breakfast, so great was the impression made on my mind by the plaid waistcoat. It was Sundays and we all breakfasted together, my parents and younger sisters and governess. Of course they all made fun of my dream, and the joke was not forgotten while we walked across the park to attend service at the village church, where as soon as I had risen from my knees I beheld my friend with the waistcoat ! There he was just in front of our pew. The man turned round facing us, and stared at me the whole of church time. I remember how disconcerted I was by this continued gaze from a perfect stranger,—a gaze, as it seemed to me, of peculiar sadness. After service was over, having whispered my father about it, he inquired of every one he knew as to who the man might be ? Nobody knew, however, nor could the slightest clue to his identity be discovered. He had disappeared as soon as service was over. It seemed impossible to let the matter rest thus, and after luncheon my sisters' governess walked off to make inquiries on her own account, and at length succeeded. The miller, who lived outside the village and always knew about everything, said the man had lodged at the mill the night before that he had attended morning service, and after returning for his things had immediately left the place. It appeared that he was a stranger, but that some years ago be had seen and had fallen deeply in love with one of the village girls. Before he had spoken to her he was hurried off for some cause, I have forgotten what, to a great distance. He had written to the girl, but never received an answer. As soon as he was free to return, he had come back to find and marry her if she consented. Then he heard for the first time that she had been dead for eight years : had died almost immediately after his departure. The shock seemed to be terrible, and he said he could not remain in the place and should go away directly after church. So he came for his things, and mentioned before leaving that he feared be had been very rude to a young lady he had seen in church, but her face had reminded him so strongly of his own lost love that he could not help staring at her all the time. That's all my story; we never saw the young man again,—nor his