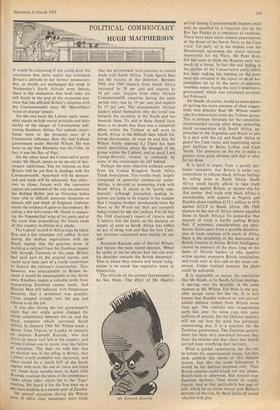 Page 5, 6 March 1971 — It would be reassuring if one could draw the conclusion
Close

It would be reassuring if one could draw the conclusion

that stern reality has overtaken Britain's attitude to her former possessions. But, as insults are exchanged this week in Wednesday's South African arms debate, there is the realisation that both sides are still firmly in the grip of the corporate neu- rosis that has afflicted Britain's relations with the Commonwealth since Mr Macmillan's 'wind of change' speech.

On the one hand the Labour party osten- sibly stands on high moral principle and talks darkly of the danger of Communism infil- trating Southern Africa. Yet nobody contri- buted more to the presence now of a Communist influence than the last Labour government under Harold Wilson. He was wont to say that Rhodesia was his Cuba. In fact it was his Bay of Pigs.

On the other hand the Conservative party under Mr Heath claims to be devoid of doc- trinaire inhibitions. The Pm informs us that Britain will be put first in dealings with the Commonwealth. Apartheid will be denoun- ced and trade will be advanced. Any objec- tors to closer liaison with the repressive regime are reminded of the way we entertain the Bolshoi Ballet, just as Victorian ladies were told in difficult amorous situations to remain still and think of England. Unfortu- nately the evidence is quite to the contrary. By selling a few helicopters Mr Heath is appeas- ing the Neanderthal wing of his party and at the same time jeopardising the future trade of this country in Africa as a whole.

The Labour record in Africa may be taken first and a few examples will suffice. It was during the endless negotiations with the Smith regime that the question arose of building a railroad from the Zambian copper belt through Tanzania to the coast. Britain had paid part of the original survey, and could have been part of a world consortium to finance the railway's construction. This, however, was unacceptable to Britain be- cause it would be unacceptable to Ian Smith since Rhodesia makes a valuable profit from transporting Zambian copper south. And Huyton Man still believed, with Panglossian devotion, that a settlement was possible. China stepped straight into the gap and offered to do the job.

It was also during the last government's reign that one single action changed the Whole relationship between the UK and the black countries which surround South Africa. in January 1966 Mr Wilson made a detour from Nigeria to Lusaka to reassure an anxious Kenneth Kaunda, who had thirty-six hours fuel left in the country, and Whose Cabinet was in revolt, over the failure of sanctions. The then PM told him that an election was in the offing in Britain, that Labour would probably win decisively, and there would be a 'quick kill' of the Smith regime with even the use of force not ruled out. Some three months later, in April 1966 Kaunda received the news of the preliminary talks about talks' which led to the 'Tiger' meeting. He heard it for the first time on a BBC news bulletin in a remote part of Zambia.

On several occasions during the Wilson term of office clear statements were made that the government were anxious to extend trade with South Africa. Trade figures bear out the success of the intention. Between 1966 and 1969 imports from South Africa increased by 58 per cent and exports by 18 per cent. Imports from other African Commonwealth countries during the same period only rose by 19 per cent and exports by 17 per cent. Not unreasonably African leaders asked themselves why the trend was towards the racialists in the South and not towards them. To add to these dismal facts there is no doubt that there was a concerted effort within the Cabinet to sell arms to South Africa in the difficult days which fol- lowed devaluation. (It must be said that Mr Wilson firmly opposed it.) There has been much speculation about the strength of the group within the Cabinet, and as usual Lord George-Brown's version is contested by some of the commoners he left behind.

Perhaps the most objective evidence comes from the United Kingdom South Africa Trade Association. This worthy body, largely composed of powerful conrtmercial under- takings, is devoted to promoting trade with South Africa. It claims to be 'purely com- mercial', although journalists making in- quiries are liable to be treated in the manner that I imagine brother newshounds from the News of the World say they are currently being treated by BBC disc jockeys. For all that the 1968 chairman's report of UKSATA said, 'I believe that the battle on the decision on supply of arms to South Africa was within an ace of being won and that the four Cabi- net ministers concerned were mainly on our side'.

President Kaunda said of Harold Wilson, just before the most recent election, 'When he spoke to me he always had one eye over his shoulder towards the British electorate'. That is where they remain and moral indig- nation is so much less expensive when in Opposition.

The attitude of the present Government is no less bleak. The effect of Mr Heath's

arrival among Commonwealth leaders could only be equalled by a fraternal visit by •the Rev Ian Paisley .to a consistory of cardinals. There have been many solemn examinations of the threat of the Soviet Navy to the Cape route. Yet early on in the dispute over the Simonstown agreement the junior minister responsible for the Navy, Mr Peter Kirk, did not seem to think the Russian navy was much of a threat. In fact the real feeling in the section of the Conservative party which has been making the running on the arms issue was revealed in the report of an ad hoc committee set up by the party to examine 'overseas issues facing the next Conservative government' which was circulated privately last February.

Mr Heath, of course, would no more dream of putting the more extreme of their sugges- tions into practice than Mr Wilson would take his instructions from the Tribune group. This is perhaps fortunate for the committee recommended among other things extending naval co-operation with South Africa, ap- proaches to the Argentine and Brazil to join in a pact with the Luc and South Africa to guard the Cape route, and negotiating naval port facilities in Beira, Lobito and Cape Verde. The pressures on the rm to make a gesture were quite obvious and that is what he has done.

It is hard to argue, from a purely eco- nomic viewpoint, that Britain is under any compulsion to inflame black African feelings by selling arms to South Africa. South Africa could hardly afford to take trade sanctions against Britain, or anyone else for that matter. And trade with black Africa is considerable, with exports to Nigeria and Zambia alone totalling £152.1 million in 1970 against £322.8 to South Africa. (By 1968 exports to the rest of Africa almost equalled those to South Africa.) To jeopardise that amount of trade is hardly putting Britain first, if economic considerations are para- mount. Quite apart from a possible deteriora- tion of trade relations with much of Africa there is the possibility of the destruction of British interests in Africa. British Intelligence cannot be unaware of the plans lying on the desks of African leaders to take punitive action against expensive British installations and trade even at dire cost to the states con- cerned. Under internal pressure the plans could be activated.

It is impossible to escape the conclusion that Mr Heath, in his South African dealings, is peering over his shoulder in the same manner as Mr Wilson. Yet there is one pos- sible escape route for the PM. It is well known that Zambia ordered an anti-aircraft missile defence system from Britain some time ago. The contract was re-negotiated early ‘last year. Its value runs into some millions of pounds, but the Defence ministry will not say how far work has advanced, commenting that it is a question for the Zambian government. The Zambian govern- ment has been very restrained because they want the missiles and they claim that hostile aircraft keep overflying their territory.

What a golden opportunity for the Pm, to bolster his unsentimental image. Let him push publicly the merits of this defence system. Just Like the WASP helicopters it would be for defence purposes only. Then British missiles could knock out any planes, British-built or otherwise, that strayed over Zambian territory. That would be crisply logical. And in that particularly hot part of hell, which he no doubt shares with Belloc's servants of the rich, Sir Basil Zaharoff would chuckle with glee.