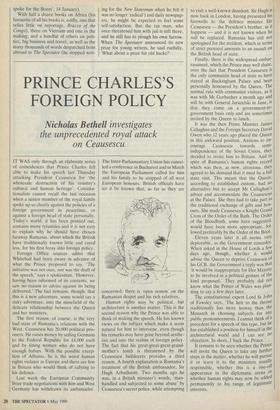 IT WAS only through an elaborate series of coincidences that Prince Charles felt able to make his speech last Thursday attacking President Ceausescu for 'the wholesale destruction of his country's cultural and human heritage'. Constitu- tionalists cannot recall the last occasion when a senior member of the royal family spoke up so clearly against the policies of a foreign government in peacetime, or against a foreign head of state personally. Today's world, it has been pointed out, contains many tyrannies and it is not easy to explain why he should have chosen faraway Rumania, about which the British have traditionally known little and cared less, for his first foray into foreign policy.

Foreign Office sources admit that Whitehall had been aware in advance of what the Prince proposed to say. 'The initiative was not ours, nor was the draft of the speech,' says a spokesman. 'However, having been informed of its contents, we saw no reason to advise against its being delivered.' The fact remains, though, that this is a new adventure, some would say a risky adventure, into the minefield of the delicate relationship between the Queen and her ministers.

The first reason, of course, is the very bad state of Rumania's relations with the West. Ceausescu has 20,000 political pris- oners. He raises money by selling Germans to the Federal Republic for £4,000 each and by fining women who do not have enough babies. With the possible excep- tion of Albania, he is the worst human rights violator in Europe and there are few in Britain who would think of rallying to his defence.

Last week the European Community froze trade negotiations with him and West Germany has withdrawn its ambassador. The Inter-Parliamentary Union has cancel- led a conference in Bucharest and in March the European Parliament called for him and his family to be stripped of all west European honours. British officials have let it be known that, as far as they are concerned, there is 'open season' on the Rumanian despot and his rich relatives.

Human rights may be political, but architecture is another matter. This is the second reason why the Prince was able to think of making the speech. He has known views on the subject which make it seem natural for him to intervene, even though his remarks may have gone beyond aesthe- tics and into the realms of foreign policy. The fact that his great-great-great-grand- mother's tomb is threatened by the Ceausescu bulldozers provides a third reason. A fourth explanation is Rumania's treatment of the British ambassador, Sir Hugh Arbuthnott. Two months ago he was, in a British minister's words, 'man- handled and subjected to some abuse' by Ceausescu's secret police, while attempting to visit a well-known dissident. Sir Hugh is now back in London, having presented his farewells to the defence minister Ilie Ceausescu — the President's brother, as it happens — and it is not known when he will be replaced. Rumania has still not apologised for the incident, which in terms of strict protocol amounts to an assault on the British head of state.

Finally, there is the widespread embar- rassment, which the Prince may well share, over the fact that President Ceausescu is the only communist head of state to have stayed at Buckingham Palace and been personally honoured by the Queen. The normal rule with communist visitors, as it was with Mr Gorbachev a month ago and will be with General Jaruzelski in June, Is that they come on a government-to- government basis only and are sometimes invited by the Queen to lunch.

It was the then Prime Minister James Callaghan and the Foreign Secretary David Owen who 12 years ago placed the Queen in this awkward position. Anxious to en- courage Ceausescu towards semi independence of the Soviet Union, they decided to invite him to Britain. And in spite of Rumania's human rights record which was then, as now, atrocious, they agreed to his demand that it must be a full state visit. This meant that the Queen, according to established custom, had no alternative but to accept Mr Callaghan's advice and accommodate the Ceausescus at the Palace. She then had to take part 111 the traditional exchange of gifts and hon- ours. She made Ceausescu a Knight Grand Cross of the Order of the Bath. The Order of the Bloodbath, some have suggested, would have been more appropriate, fol- lowed preferably by the Order of the Boot.

Eleven years later it all seems verY deplorable, as the Government concedes. When asked in the House of Lords a few days ago, though, whether it would advise the Queen to deprive Ceausescu of his GCB, the Government's reply was that 'it would be inappropriate for Her Majesty to be involved in a political gesture of the kind proposed.' They probably did nut know what the Prince of Wales was plan- ning to say a few days later.

The constitutional expert Lord St John of Fawsley says, 'The heir to the throne traditionally has more leeway than the Monarch in choosing subjects for any public pronouncements. I cannot think of a precedent for a speech of this type, but he has established a position for himself in the architectural world and I can see no objection. In short. I back the Prince.'

It remains to be seen whether the Prince will invite the Queen to take any further steps in the matter, whether he will pursue it or leave it to the ministers usually responsible, whether this is a one-off appearance in the diplomatic arena or whether human rights may now be added permanently to his range of legitimate interests.