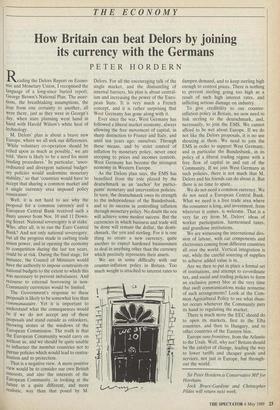 Reading the Delors Report on Econo- mic and Monetary Union, I recognised the language of a long-since buried report, George Brown's National Plan. The asser- tions, the breathtaking assumptions, the leap from one certainty to another, all were there, just as they were in George's day, when state planning went hand in hand with Harold Wilson's white heat of technology.

M. Delors' plan is about a brave new Europe, where we all sink our differences. 'While voluntary co-operation should be relied upon as much as possible,' we are told, 'there is likely to be a need for more binding procedures.' In particular, 'unco- ordinated and divergent national budget- ary policies would undermine monetary stability,' so that 'countries would have to accept that sharing a common market and a single currency area imposed policy constraints'.

Well, it is not hard to see why the Proposal for a common currency and a European Central Bank received such a dusty answer from Nos. 10 and 11 Down- ing Street. National sovereignty is at stake. Who, after all, is to run the Euro Central Rank? And not only national sovereignty, but all the progress made in curbing trade union power, and in opening the economy to competition during the last ten years, could be at risk. During the final stage, for instance, the Council of Ministers would have the authority to impose constraints on national budgets to the extent to which this was necessary to prevent imbalances. And recourse to external borrowing in non- Community currencies would be limited.

The Government's response to these Proposals is likely to be somewhat less than communautaire. Yet it is important to understand what the consequences would be if we do not accept any of these Proposals and stand outside as onlookers, throwing stones at the windows of the European Commission. The truth is that the European Community would carry on Without us, and we should be quite unable to influence the member countries not to Pursue policies which would lead to centra- lisation and to protection.

That is a negative view. A more positive view would be to consider our own British interests, and also the interests of the European Community, in looking at the future in a quite different, and more realistic, way than that posed by M. Delors. For all the encouraging talk of the single market, and the dismantling of internal barriers, his plan is about central- ism and increasing the power of the Euro- pean State. It is very much a French concept, and it is rather surprising that West Germany has gone along with it.

Ever since the war, West Germany has followed a liberal market economy, always allowing the free movement of capital, in sharp distinction to France and Italy, and until ten years ago, ourselves. Through these means, and by strict control of inflation by monetary policy, never once stooping to prices and incomes controls, West Germany has become the strongest economy in Western Europe.

As the Delors plan says, the EMS has benefited from the role played by the deutschmark as an 'anchor' for partici- pants' monetary and intervention policies. In turn, the deutschmark owes its strength to the independence of the Bundesbank, and to its success in controlling inflation through monetary policy. No doubt the ecu will achieve some modest success. But the currencies in which business and trade will be done will remain the dollar, the deuts- chmark, the yen and sterling. For it is one thing to create a new currency, quite another to expect hardened businessmen to deal in anything other than the currency which precisely represents their assets.

We are in some difficulty with our counter-inflation policy in Britain. Too much weight is attached to interest rates to dampen demand, and to keep sterling high enough to control prices. There is nothing to prevent sterling going too high as a result of such high interest rates, and inflicting serious damage on industry.

To give credibility to our counter- inflation policy in Britain, we now need to link sterling to the deutschmark, and, necessarily, to join the EMS. We cannot afford to be wet about Europe. If we do not like the Delors proposals, it is no use shouting at them. We need to join the EMS in order to support West Germany, and in particular the Bundesbank, in its policy of a liberal trading regime with a free flow of capital in and out of the Community. If we join West Germany in such policies, there is not much that M. Delors and his friends can do about it. But there is no time to spare.

We do not need a common currency. We do not need a European Central Bank. What we need is a free trade area where the consumer is king, and investment, from wherever it comes, is welcome. That is a very far cry from M. Delors' ideas of worker participation, harmonised taxes, and grandiose institutions.

We are witnessing the international divi- sion of labour, with car components and electronics coming from different countries all over the world. Vertical integration is out, while the careful sourcing of supplies to achieve added value is in.

Are we then to put in place a formal set of institutions, and attempt to co-ordinate tax, and social and trading policies to form an exclusive power bloc at the very time that swift communications make nonsense of such arrangements? Look at the Com- mon Agricultural Policy to see what disas- ter occurs whenever the Community puts its hand to regulating the market.

There is much more the EEC should do to open its markets, first to the Efta countries, and then to Hungary, and to other countries of the Eastern bloc.

Europe sans frontieres, from the Atlantic to the Urals. Well, why not? Britain should

be the catalyst of change, leading the way to lower tariffs and cheaper goods and services, not just in Europe, but through- out the world.

Jock Bruce-Gar4ne and Christopher Fildes will return next week.