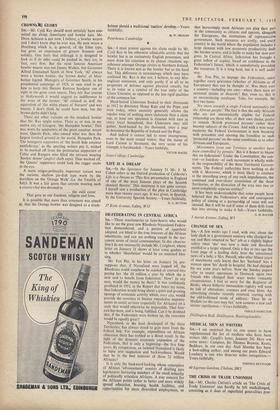 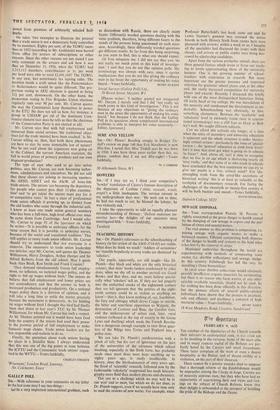 THE CRISIS OF TRADE UNIONISM

SIR,—Mr. Charles Curran's article on 'The Crisis of Trade Unionism' can hardly be left unchallenged, consisting as it does of superficial generalities pro-

jetted from premises of arbitrarily selected half- truths.

He takes `two examples to illustrate the process' that a trade union is not a democratic body controlled by its members. Eighty per cent. of the TGWU mem- bers in 1952 (according to Mr. Goldstein) were barred from office for arrears of subscriptions or other reasons. Since the other reasons are not stated 1 can only comment on the arrears and ask how it was that on December 31, 1956, when the TGWU had 1,315,113 members, contributions at Is. per week pet head were able to total £2,491,160? The TGWU, in any case, has notoriously lax lapsing rules. The position inside a craft union like the Patternmakcrs or Boilermakers would be quite different. The pro- -portion voting in AEU elections is quoted as being 124- per cent, downwards. On the other hand, the proportion voting in Fire Brigades Union elections regularly runs over 90 per cent. Mr. Curran quotes the way the Communists keep themselves in power in the ETU. He does not tell us how, for instance, a group in USDAW got rid of the dominant Com- munist element (nor does he tells us, that the chairman of the Conservative Party is not elected at all).

Mr. Curran says that with full employment and universal State social services 'the traditional objec- tives [of the trade unions] have been reached.' Is Mr. Curran telling us, then, that* both these phenomena are here to stay by some immutable law of nature? Has he not read about the arguments now going on in the Cabinet, the current American recession, the fall in world prices of primary products and our own stagnant production?

The type of men who used to go into union -politics, says Mr. Curran, are now becoming techni- cians, administrators and executives. He did not add that these classes are joining in increasing numbers the AESD, ASSET and the AScW, all bona-fide trade unions. The unions 'are becoming the depository for people who cannot pass their 11-plus examina- tion' and `to get talent the unions must pay for it at competitive rates.' In fact a class of professional trade union officials is growing up, as distinct from the old leaders who came through the industrial mill. I know at least one trade union general secretary who has been a full-time, high-level official ever since he came down from Cambridge. And I would refer Mr. Curran to page 93 of the Spectator on which he writes—qt is possible to underpay officers for the same reason that it is possible to underpay nurses, because of the social and vocational tradition.' This still applies to many trade union officials. Mr. Curran should try to understand that not everyone is a careerist. The successors to trade union leadership are inferior, says Mr. Curran, and quotes Sir Thomas Williamson, Harry Douglass, Arthur Horner and Sir Alfred Roberts, from the old school. May I quote back Alan Birch, Ron Smith and Frank Cousins?

'They demand simultaneously frozen full employ- ment, no inflation, no national wages policy, and the right to bid up wages without limit.' The unions do believe that full employment and lower prices are not contradictory and that the answer to both is increased production and productivity. On a national wages policy there is a division of opinion, and it will take a long time to settle the matter precisely because the movement is democratic. As fOr bidding up wages without limit I thought this bird had finally been shot down at last year's TUC by Sir Thomas Williamson, for whom Mr. Curran has such a respect. As Sir Thomas pointed out it would have been God help the country if the unions had used their power in the postwar period of full employment to make fantastic wage claims. Trade union leaders are far too responsible and realistic to do so.

Finally, the quotation about trade unions having no place in a Socialist State. I always understood that this was one of the big points at issue between the ICFTU and the Communist `trade unions' organ- ised in the WFTU.—Yours faithfully,