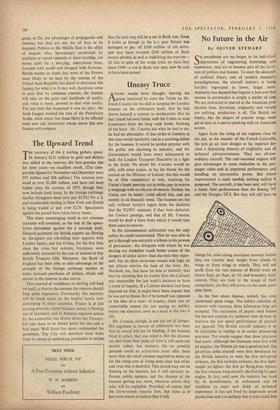 THE recovery of the £ sterling gathers speed. In January $131 million in gold and dollars was added to the reserves, the best genuine rise for four years—an excellent result. (The com- parable figures for November and December were $92 million and $88 million.) The reserves now stand at over $2,400 million, and have not been higher since the autumn of 1455, though they now include fresh loans. In the foreign exchange market foreigners must now pay $2.811 for a £, and transferable sterling in New York and Zurich is being traded at just over $2.79. Speculators against the pound have taken heavy losses.

This more encouraging trend in our overseas accounts will continue, as the rest of the specu- lative movement against the £ unwinds itself. Delayed payments for British exports are flowing in; foreigners are rebuilding their deposits with London banks; and last Friday, for the first time since the crisis last autumn, foreigners were sufficiently attracted by the rate of interest to buy British Treasury bills. Moreover, the Bank of England has been able to take advantage of the strength of the foreign exchange market to make forward purchases of dollars, which will accrue to the reserves in due course.

This renewal of confidence in sterling will feed on itself, so that by the summer the reserves should look quite impressive. Fortunately this recovery will be made easier by the helpful trends now developing in other countries. France is at last moving towards a better balance, money is flowing out of Germany, and in America vigorous action by the authorities has driven down the Treaspry bill rate there to its lowest point for two and a half years. Wall Street has again confounded the pessimists. The City will therefore soon wake from its mood of unthinking pessimism to realise that the next step will be a cut in Bank rate. Since it looks as though in the laJt year Britain has managed to pay off £100 million of old debts, and may have invested £100 million of fresh money abroad, as well as stabilising the reserves— all this in spite of the worst crisis we have had since 1949—a cut in Bank rate may now be said to have been earned.