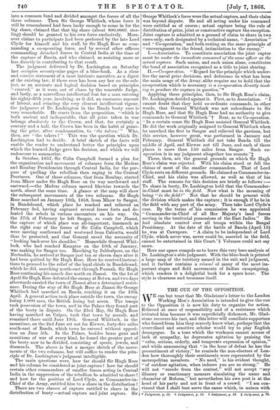 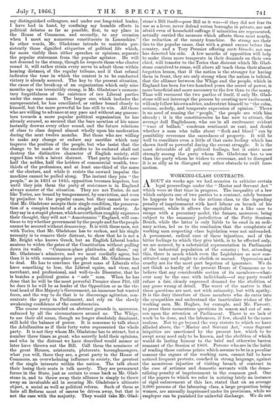 THE CUE OF THE OPPOSITION.

WE can but trust that Mr. Gladstone's letter to the London Working Men's Association is intended to give the cue to the Opposition it is now his duty to organize for action. Relieved at once of responsibility and of a resistance which irritated him because it was superficially dishonest, Mr. Glad- stone recovers his tact, and this letter will conciliate supporters who feared from him they scarcely knew what, perhaps that the overrefined and sensitive scholar would try to play English demagogue. In a tone which the workmen cannot accuse of lack of sympathy, he deprecates agitation by praising the " calm, serious, orderly, and temperate expression of opinion," and while announcing that "in the hour of defeat he has the presentiment of victory," he reminds the non-electors of Lon- don how thoroughly their sentiments were represented by the metropolitan members. " No need," is his evident thought, " of outdoor agitation, when indoors you are so strong." He will not "recede from the contest," will not accept "any illusory or reactionary measure simulating the name and character of Reform," but nevertheless his own post is at the head of his party and not in front of a crowd. " I am con- vinced that I shall best serve the cause which, in unison with

my distinguished colleagues, and under our long-tried leader, I have had in hand, by confining my humble efforts in political debates as far as possible, first, to my place in the House of Commons, and secondly, to any occasion when I meet my numerous constituents in Lancashire." In other words, Mr. Gladstone intends to maintain per- sistently those dignified etiquettes of political life which, far more visibly than either speeches or opinions, separate the popular statesman from the popular agitator. He will not descend to the stump, though he respects those who cluster round it, will rather strain every nerve to admit them within hearing distancq, of the regular tribune, and if that refusal indicates the tone in which the contest is to be conducted victory is already assured. The key to the present situation, the cause of the break-up of an organization which only nine months ago was irresistibly strong, is Mr. Gladstone's momen- tary forgetfulness of the existence of two Liberal parties under the same name. The larger one, which includes the unrepresented, he has conciliated, or rather bound closely to himself, but the more powerful he has still to win. All those who are willing to advance at any pace and without any guaran- tees towards a more popular political organization he has already secured, so secured that the bare mention of his name instantly drowns every other sound, and the future relations of class to class depend almost wholly upon his moderation during the next twelve months. But those who are willing to make any change or endure any sacrifice which may improve the position of the people, but who insist that the change to be made or the sacrifice to be endured shall not destroy the distinctive character of English society, still regard him with a latent distrust. That party includes one- half the nobles, half the holders of commercial wealth, two- thirds of the professions, and at least one-third of the mass of the electors, and while it resists the onward impulse the machine cannot be pulled along. The instant they join " the people," as in 1831 or 1845, opposition becomes hopeless, but until they join them the party of resistance is in England always master of the situation. They are not Tories, do not like Tories, are bound by temperament, by conviction, and even by prejudice to the popular cause, but they cannot be sure that Mr. Gladstone accepts their single condition, the preserva- tion of a complex instead of a simple political society. As they say in a stupid phrase, which nevertheless roughly expresses their thought, they will not "Americanize " England, will con- tinue to try whether government by the people and for thepeople cannot be secured without democracy. It is with these men, not with Tories, that Mr. Gladstone has to reckon, and his single necessity is to remove their distrust, to show that he is not a Mr. Bright who knows Greek, but an English Liberal leader anxious to widen the gates of the Constitution without pulling down its walls. " Common-place platitudes, all those," say Mr. Gladstone's admirers, and we most cordially agree, but then it is with common-place people that Mr. Gladstone has to deal. He has to convince the great mass of Liberals who have something to lose, the Liberal squire, and vicar, and merchant, and professional, and well-to-do Dissenter, that he is besides a political genius a " safe " man. When he has done that he will be the most powerful Premier since Pitt, till he does it he will be as leader of the Opposition or as the vir- tual head of Her Majesty's Government, an immense but wasted force, and the way to do that is to discourage agitation, con- centrate the party in Parliament, and rely on the slowly awakening confidence of the constituencies.

The course recommended on abstract grounds is, moreover, enforced by all the circumstances around us. The Whigs, to use their old name, though no longer absolutely dominant, still hold the balance of power. It is nonsense to talk about the Adullamites as if their forty votes represented the whole party. It is not they whom Mr. Gladstone has to attract, but a number three times as great, who secretly hold their opinions, and who in the distrust we have described would sooner or later have thrown out the Bill. Call them the nominees of the great Houses, aristocrats, plutocrats, boroughmongers, what you will, there they are, a great party in the House of Commons, an overwhelming influence in society, the greatest of the single interests within the nation. The talk about their losing their seats is talk merely. They are permanent forces in the State, just as certain to come back as Mr. Glad- stone is, and to throw away their alliance is simply to throw away an invaluable aid in securing Mr. Gladstone's ultimate object, a social as well as political reform. Such of them as hate all Reform must of course be driven away, but that is not the case with the majority. They would take Mr. Glad-

stone's Bill itself—poor Bill as it was—if they did not fear its use as a lever, never defend rotten boroughs in private, are not afraid even of household suffrage if minorities are represented, actually carried the measure which affects them most nearly, the reduction of the county franchise. So strong are their ties to the popular cause, that with a grand excuse before the country, and a Tory Premier offering carte blanche, not one has deserted his side. A few months of opposition will help to make them more temperate in their demands on their own chief, will transfer to the Tories that distrust which Mr. Glad- stone contrived to rouse, will above all teach them their almost forgotten lesson, that if the nation is the stronger for having them in front, they are only strong when the nation is behind, that the alliance between the Whigs and the people, which in England has been for two hundred years the secret of power, is more beneficial and more necessary to the few than to the many. Time will recement the two parties of itself, if only Mr. Glad- stone will not interrupt the process by creating new excitement, willonly follow his own advice, andrestrict himself to "the calm, serious, orderly, and temperate expression of opinion." There• is no need of rousing the "people," the people are with him already ; it is the constituencies he has now to attract, the average dull Englishmen, who see in all excitement evident " want of ballast," condemn sentiment as rant, and doubt whether a man who talks about " flesh and blood " can by possibility reverence the sacredness of property. It will be well to conciliate even a little of that caste feeling which has shown itself so powerful during the recent struggle. It is the most detestable of all political feelings, but it exists more strongly among the party whom Mr. Gladstone has to use than the party whom he wishes to overcome, and to disregard it is as silly as to disregard any other obstacle to swift loco- motion.