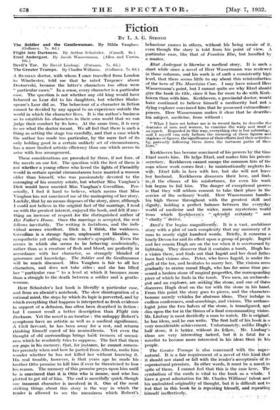 G. ,,ritaica• Devil's Tor. By David Lindsay: (Putnam. 7s. lid.) The Greater Trumps. By Charles Williams. (Gollanez. 7s. lid.) A RUSSIAN doctor, with whom I once travelled from London to Winchester, told me that he rated Turgenev above Dostoevski, because the latter's characters too often were " particular cases." In a sense, every character is a particular ease. The question is not whether any old king would have behaved as Lear did to his daughters, but whether Shake- speare's Lear did so. The behaviour of a character in fiction cannot be decided by any appeal to an experience outside the world in which the character lives. It is the author's business so to establish his characters in their own world that we can judge their conduct by its laws. At the same time, it is easy to see what the doctor meant. We all feel that there is such a thing as setting the stage too carefully, and that a ease which the author has made too particular, by the mere fact of its only holding good in a certain unlikely set of circumstances, has a more limited artistic efficiency than one which seems to arise with less arrangement.

These considerations are provoked .by three, if not four, of the novels on our list. The question with the first of them is not whether a young officer who loved the lights of Piccadilly would in certain special circumstances have married 'a woman older than himself, who was passionately devoted to the managing of his country estate, but whether Miss Vaughan'S Dick would have married Miss Vaughen's Gwerfilian. Per- solially, I find it, hard to believe, which means that Miss Vaughan has not convinced me of the mainspring of her story. Luckily, that by no means disposes of the story, since, although I could not believe in the original fact of the marriage, I read on with the greatest interest, enjoyed the book, and felt if any- thing an increase of respect for the distinguished author of Hp. Father's house. Once the marriage is accepted, the rest follows inevitably. The writing is fastidious, and the indi- vidual scenes excellent. -Dick is, I -think, the weakness. Grvenllian is a strange figure, unpleasant yet likeable, un- sympathetic yet calling on the reader's sympathy. Even the scenes in which she seems to be behaving academically, rather than as a creature of flesh and blood, are perfectly in • accordance with her character, so strangely blended of ignorance and knowledge. The Soldier and the Gentlewoman will be much discussed. Miss Vaughan is fair to all her 1 characters, and does not take sides : and she has lifted her " particular case " to a level at which it becomes more . than a struggle to the death between a soldier and a gentle- woman.

Herr Schnitzler's last book is literally a particular case, and from an alienist's notebook. The slow disintegration of a I rational mind, the steps by which its logic is perverted,.and by which everything that happens is interpreted as fresh evidence in support of a delusion, has often been described in fiction : but I cannot recall a better description than Flight into ■ Darkness. Yet the novel is no treatise : the unhappy Robert's :symptoms have an artistic as well as a medical significance. A Civil Servant, he has been away for a rest, and returns , thinking himself cured of his neurasthenia. Yet even the thought of old surroundings brings bdek' tremors of uneasi- ness which he resolutely tries to suppress. The fact thnt there are gaps in his memory, that, for instance, he cannot .remem- ber precisely when and how he parted from Alberta, make him wonder whether he has not killed her Without knowing it. His real trouble, however, is that years ago he made his brother Otto promise to kill him if ever he threatened to lose ! bis reason. The memory of this promise preys upon him until ' he is convinced that it is Otto who is insane, -and who has plotted to get rid of him. The end is mercifully quick. though one innocent character is involved in it. One of the most striking things about this story is the way in which the reader is allowed to see the uneasiness which Robert's '• behaviour causes in others, without his 'being aware of it, even though the story is told from his point of view. A particular case, like that of Fraulein Else, but handled by a master.

• Etzel Andergast is likewise a medical story. It is such a

• short while since a novel of Herr Wassermann was reviewed in these columns, and his work is of such a consistently high leVel, that there seems little to say about this reintroduction of the hero of The Mauriziiis Case. I may have missed Herr Wassermann's point, but I cannot quite see why Etzel should give the book its title, since it has far more to do with Kerk- hoven than with him. Kerkhoven, a provincial doctor, would have continued to believe himself a mediocrity had not a dying explorer convinced him that he possessed extraordinary

• powers. Herr Wassermann makes it clear that he describe.

hin subject, medicine, from without : "What I have set before me is to record facts, to describe the destinies of men and women, to examine the weir and woof of ail epoch. Regarded in this way, everything else is but subterfuge, anti I myself can only fathom the meaning of these figures and si.-,.-heLdows of figures, the significance of their efforts and their activities ' by, patiently following them down the tortuous paths of their

Kerklioven bas become convinced of his powers by the time ; Etizel meets him. He helps Etzel, and snakes him his private

I seeretary. Kerkhoven cannot escape the common fate of the

ninn whose work comes first : he unintentionally neglects his wife. Etzel falls in love with her, but she will not leave her husband. Kerkhoven discovers their love, and funds . in i it the climax of his misfortunes, for even his work i htd; begun to fail him. The danger of exceptional powers • is that they will seldom consent to take their place in the service of the ordinary 'World. Herr Wassermann handles hig high theme throughout with the greatest skill and . I dignity, holding a perfect balance between the everyday . world of medicine and the wider, more mysterious world ' from which Kerldtoy9Fa "spicylid certainty " and clarity "'derive. , Devil's Tor begins Magniffeentfy. It is a vast, ambitious ' story with a plot of such complexity that my sununary of it I runs to nearly eight hundred words. Briefly, it concerns a lonely Devon for and its effect upon -a group otpeople. Ingrid and her cousin Hugh are on the for when it is overturned by lightning. They discover that it contains a tomb, Hugh has a vision there, and finds out that Ingrid and her dead father have had visions also. Peter, who loves Ingrid, is under the spell of the tor, and hesitates to marry her. The visions seem gradually to centre round Hugh, who has for some time pos- sessed a broken stone otniagicat properties, the corresponding piece of which he finds in the tomb. Two men, an archaeolo- gist and an explorer, are seeldnithe stone,: and one •of tlrfm discovers Hugh dead on the for with the stone in Isis hand. From this point the story goes to pieces, and the character. become merely vehicles for abstruse ideas. They indulge in endless conferences, soul-searchings, and visions. The archaeo- logist joins the two halves of the -stone, is transfigured, and dies upon the for in the throes of a final eoesummating vision. Mr. Lindsay is most decidedly a man to watch. He is original, he has ideas, .and.he can write. The first half of his book is a very considerable achievement. Unfortunately, unlike Hugh's half stone, it is better, without its fellow.. Mr. Lindsay's ideas are very interesting indeed, but it is fatal for a novelist to become more interested in his ideas than in his

The Greater Trumps is also concerned With the Super-- natural. It is a fair requirement of a novel of this kind.that it should not stand or fall with theivader's-acceptinCe of its supernatural premises, In other words, it must be a .novelin spite of them. I cannot 'feel that this is the case here. The symbolism of the cards is vital to the book as a whole.' I haven great admiration for Mr. Charles Williams' talent and his undoubted originality of thought, but it is difficult not to feel that in this book he is repeating himself, and repeating himself ineffectively.