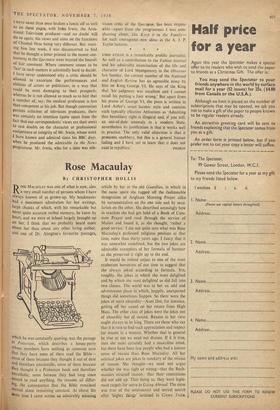 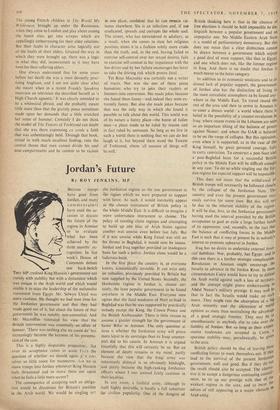 By CHRISTOPHER HOLLIS ROSE MACAULAY was one of what is now, alas, a very small number of persons whom I have always known of as grown-up. My headmaster had a passionate admiration for her writings, large chunks of which, with his remarkable but never quite accurate verbal memory, he knew by heart, and we were at School largely brought up on her. I think that we probably heard more about her than about any other living author, and one of Dr. Alington's favourite passages, Which lie was constantly quoting, was the passage in Potterism, which describes a house-party whose members have nothing in common save that they have none of them read the Bible— some of them because they thought it out of date and therefore unscientific, some of them because they thought it a Protestant book and therefore uncatholic, some because they had long since ceased to read anything, the reasons all differ- ing, the consequence that the Bible remained unread alone remaining constant. At about the 44'ille time I came across an admirably amusing article by her in the old Guardian, in which in the same spirit she ragged off the fashionable denigration of Anglican Morning Prayer alike by sacramentalists on the one side and by secu- larists on the other. She described amusingly how in reaction she had gOt hold of a Book of Com- mon Prayer and read through the service of Matins and found it, as she thought, 'rather a good service.' I am not quite sure what was Rose Macaulay's professed religious position at that time, more than thirty years ago. I fancy that it was somewhat undefined, but the two jokes are admirable exemplars of her formula of humour as she preserved it right up to the end.

It would be indeed unjust to one of the most exuberant humorists of our time to suggest that she always joked according to formula. Yet, roughly, the jokes in which' she most delighted and by which she most delighted us did fall into two classes. The world was to her an odd and adventurous place in which, happily, unexpected things did sometimes happen. So there were the jokes of mere absurdity—Aunt Dot, for instance, getting off her camel on her return from High Mass. The other class of jokes were the jokes not of absurdity but of reason. Reason in her view ought always to be king. There are those who say that it is rare to find such appreciation and respect for reason in a woman. Whether that in general be true or not we need not discuss. If it is true, then she most certainly had a masculine mind, but there have been few people who had a keener sense of reason than Rose Macaulay. All her satirical jokes are jokes in mockery of the misuse of reason. She thought—we need not argue whether she was right or wrong—that the Buch- manites misused reason: that their contentions did not add up.' That being so, they were legiti- mate targets for satire in Going Abroad. The same was true of the sentimental and unreal search after 'higher things' satirised in Crewe Train. The young French children in The World My Wilderness, brought up under the Resistance, when they come to London and play about among the bomb sites, get into scrapes which are appallingly embarrassing for their elder relations. But their faults in character arise logically out of the faults of their elders. Granted the way in which they were brought up, there was a logic in what they did, inconvenient as it may have been for their suffering elders.

One always understood that for some years before her death she was a most devoutly prac- tising Anglican, and I am not quite clear what she meant when in a recent Frankly Speaking interview on television she described herself as 'a High Church agnostic.' It was clearly intended to be a whimsical phrase, and she probably meant little more than that the gravely pious sometimes made upon her demands that a little stretched her sense of humour. Certainly '1 do not think the reader of The Towers of Trebizond can ddubt that she was there expressing ex corde a faith that was unhesitatingly held. Through that book, mixed in with much excellent fooling; runs the central theme that man cannot divide his soul into compartments and be content to be vicious in one place, confident that he can remain vir- tuous elsewhere. Sin is an infection and, if not eradicated, spreads and corrupts the whole soul. The sinner, who has surrendered to adultery, as a result, when she comes to state her religious position, states it in a fashion subtly more crude than the truth, and, in the end, having failed to exercise self-control over her sexyal desires, fails to exercise self-control in her impatience with the bus driver and by her failure encourages her lover to take the driving risk which proves fatal.

Yet Rose Macaulay was certainly not a writer of tracts. Nor was she one of those pious humorists who try to joke their readers or listeners into conversion. She made jokes because she found them funny—and indeed they were ex- tremely funny. But also she made jokes because that was the only way in which she found it possible to talk about this world. This world was of its nature a funny place—the home of fallen man—a place made to be ruled by reason and in fact ruled by unreason. So long as we live in such a world there is nothing that we can do but laugh at it, but beyond there stand the Towers of Trebizond, Where 'all manner of things will be well.'