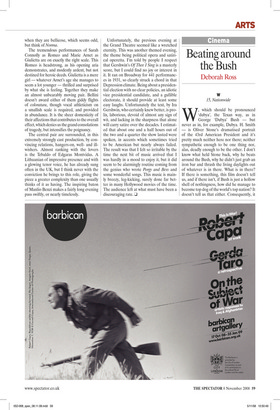 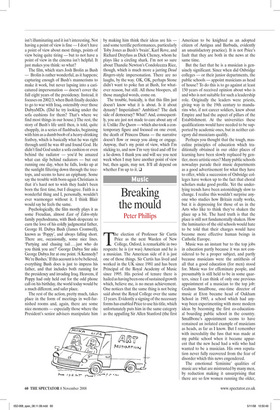 Beating around the Bush

15, Nationwide W, which should be pronounced ‘dubya’, the Texan way, as in George ‘Dubya’ Bush — but never as in, for example, Dubya. H. Smith — is Oliver Stone’s dramatised portrait of the 43rd American President and it’s pretty much neither here nor there; neither sympathetic enough to be one thing nor, alas, deadly enough to be the other. I don’t know what held Stone back, why he beats around the Bush, why he didn’t just grab an iron bar and thrash the living daylights out of whatever is in there. What is in there? If there is something, this film doesn’t tell us, and if there isn’t, if Bush is just a hollow shell of nothingness, how did he manage to become top dog of the world’s top nation? It doesn’t tell us that either. Consequently, it isn’t illuminating and it isn’t interesting. Not having a point of view is fine — I don’t have a point of view about most things, points of view being quite tiring — but to not have a point of view in the cinema isn’t helpful. It just makes you think: so what?

The film, which stars Josh Brolin as Bush — Brolin is rather wonderful, as it happens; capturing enough of Bush’s mannerisms to make it work, but never lapsing into a caricatured impersonation — doesn’t cover the full eight years of the presidency. Instead, it focuses on 2002/3, when Bush finally decides to go to war with Iraq, ostensibly over those DubyaMDs. (Did he try looking under the sofa cushions for them? That’s where we find most things in our house.) The rest, the story of Bush’s life until then, is told, quite choppily, in a series of flashbacks, beginning with him as a dumb boob of a heavy-drinking fratboy, which is basically what he was right through until he was 40 and found God. He didn’t find God under a sofa cushion or even behind the radiator — you’d be amazed what can slip behind radiators — but out running one day, when he falls, looks up at the sunlight filtering down through the treetops, and seems to have an epiphany. Some say the trouble with born-again Christians is that it’s hard not to wish they hadn’t been born the first time, but I disagree. Faith is a wonderful thing and I, personally, wouldn’t ever warmonger without it. I think Blair would say he feels the same.

Psychologically, the film mostly plays it as some Freudian, almost East of Eden-style family psychodrama, with Bush desperate to earn the love of his coldly judgmental father, George H. Dubya Bush (James Cromwell), known as ‘Poppy’, and always falling short. There are, occasionally, some nice lines. ‘Partying and chasing tail ... just who do you think you are?’ George Dubya Snr asks George Dubya Jnr at one point. ‘A Kennedy? We’re Bushes.’ If this account is to be believed, everything Bush does is just to impress his father, and that includes both running for the presidency and invading Iraq. Heavens, if Poppy had only held out for the odd phone call on his birthday, the world today would be a much different, and safer place.

The rest of the action, pretty much, takes place in the form of meetings in well-furnished rooms and, again, there are some nice moments — especially those where the President’s senior advisers manipulate him by making him think their ideas are his — and some terrific performances, particularly Toby Jones as Bush’s ‘brain’, Karl Rove, and Richard Dreyfuss as Dick Cheney, whom he plays like a circling shark. I’m not so sure about Thandie Newton’s Condoleezza Rice, though, which is much more a jarring Dead Ringers-style impersonation. There are no laughs, by the way. OK, OK, perhaps Stone didn’t want to poke fun at Bush, for whatever reason, but still. All those bloopers, all those mangled words, come on.

The trouble, basically, is that this film just doesn’t know what it is about. Is it about dynasty? Imperialism? Ambition? The dark side of democracy? What? And, consequently, you are just not made to care about any of it. Unlike The Queen — which also took a contemporary figure and focused on one event, the death of Princess Diana — the narrative doesn’t flow or sweep you along or engage. Anyway, that’s my point of view, which I’m sticking to, and now I’m very tired and off for a lie-down. I thank you and will see you next week when I may have another point of view but, then again, may not. It’ll all depend on whether I’m up to it. ❑