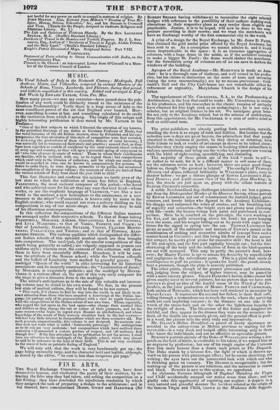 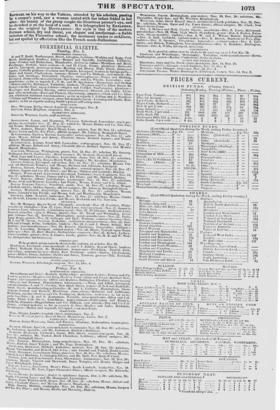 Page 20, 9 November 1839 — The print-publishers are already putting forth novelties, notwithstanding the town
Close

The print-publishers are already putting forth novelties, notwithstanding the town

is so empty of rank and fashion. But besides that the nobodies now-a-days are great buyers, the printsellers find that people absorbed in the business of parties, be they dining or debating, have little leisure to look at works of art except as shows to be talked about;

therefore they wisely employ the season in booking titled subscribers to embryo speculations, and bring out the works before people are wearied with the whirl of sight-seeing, speechifying, and dinnering.

The majority of these prints are of the kind " made to sell"— or rather to be sold, for it is a difficult matter to sell some of them, try the salesmen never so hard : however, there are some good things

before us, though " the greatest is behind." The sunlight of TURNER'S Mercury «nd Argus, reflected brilliantly in WILLMORE'S plate, casts its shadow before : we get a distant glimpse of EDWIN LANDSEER'S High. land Drovers ; and a still nearer -view of his Return from Hatching ; in fact, the steeds are just upon us, glossy with the silken texture of SAMUEL COUSINS'S mezzotint.

A noble Newfoundland dog challenges admiration ; no less a personage than the Distinguished Member of the Humane Society, whose portrait by EDWIN LANDSEER put out of countenance the learned judges, grave

senators, and lovely ladies who figured in the Academy Exhibition : his shaggy coat surpassed the robes of ermine, and his breathing look

of sagacity and animation—the bright eyes and glossy nose glistening

with life—made the human beings look paint and pasteboard, in comparison. Here he is, couched on the pier-edge, the wave washing at his feet, and the gulls screaming above his head ; his paws Imaging

over the stone, and his tongue lolling out as he pants with eager impatience for the signal to spring into the sea. THOMAS LANDSEER has given as much of the substance and texture of EDWIN'S pencil as the

combination of etching and mezzotint admits of (except from such a master-hand as Cousrss) ; and this being his first essay of the mezzo tint scraper, he merits great praise for executive skill : the bead is full

of life and spirit, and the fore part capitally brought omit; but the foreshortening of the body and the indication of form in the hind-quarters are not well managed. This may be partly the painter's fault, how ever ; for Master EDWIN is apt to misuse his dexterity by superficiality and negligence in the subordinate parts. This is a print that needs no vendiloguenee to puff its praises ; it speaks for itself: the proofs already bear a premium, though the plate is scarcely published.

The other prints, though of far greater pretension and elaboration, and, judging from the subject, of higher interest, may be passed by

with a more cursory glance. GRACE DARLING'S heroic achievement has given employment to several painters, but no picture that we have seen conveys so good an idea of the fearful scene of the Wreck of the For fare/mire, as as the joint production of Messrs. PARKER and CARMICHAEL, both artists of Newcastle, which has been well rendered in mezzotint by DAVID LUCAS. It represents GRACE and her father, in their frail eoble, toiling through a tremendous sea to reach the rock, where the surviving souls arc seen imploring succour ; in the distance on one side is the wreck of the steam-boat, and on the other the lighthouse looming in the twilight of dawn. The likenesses of the father and daughter are faithful, and they appear in the dresses they wore on the occasion : indeed, all the details are accurately given, and the general effect is good : in a word, the picture tells the story truly and impressively. Mr. GRANT'S Melton Breakfast—a parcel of dandy sportsmen assembled in the eating-room at Melton previous to starting for the cover-side—is a very weak and insipid affair, interesting only to those who know the individuals, and not an effective or agreeable picture. BURNET'S portrait-picture of the Duke of WELLINGTON writing a despatch on the field of battle, is creditable to his talent, if we regard him as an engraver by profession ; but one of his rough copies of time Cartoons

does him more honour than a dozen such prints as 'The Despatch. The Duke stands by a bivouac fire, the light of which is thrown up ward on his person with picturesque effect ; but he seems sketching, not writing ; the eyes have not the introverted look with which one who

is thinking gazes on vacancy. The likeness is recognizable ; but the making-up of the picture is not felicitous, and the mezzotint is coarse and black. BURNET is new to this system, we apprehend.

An elaborate German lithograph of Raphael Sketching the Virgin and Child accidentally escaped our notice some time since ; and we

gladly take this opportunity of repairing our neglect : it depicts .in a very natural and graceful manner the incident related as the origin of the famous Virgin and Child, known as the Madonna della Seggiola. Rioneal. on his way to the Vatican, attended by his scholars, passing by a cooper's yard, saw a woman seated with her infant folded in her arms : the beauty of the group caught the illustrious painter's eye, and be sketched it on the head of a cask. It is lithographed by EAXLEBEN, from the original by HOPFGARTEN the style is that of the modern German school, dry and literal, yet elegant and intellectual—a feeble imitation of the Florentine school; the sentiment tender to sickliness, but not spoiled by affectation like the French mock-Italianisms.