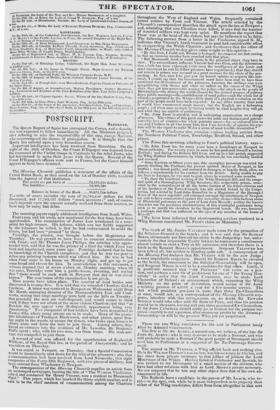 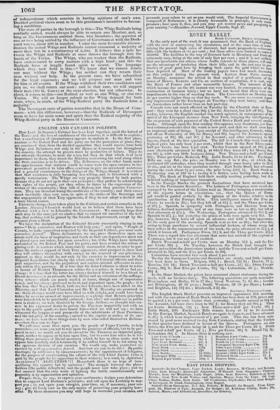 Page 9, 9 November 1839 — There are two Whig candidates for the seat in Parliament lately filled by Admiral ConniNuToN.
Close

There are two Whig candidates for the seat in Parliament lately filled by Admiral ConniNuToN.

The first is Mr. Sr. AI:11IN, a natural son, we believe, of the late Sir JOHN Si'. AUBTN ; who is very desirous to be made a Baronet, and who will probably be made a Baronet if the good people of Devonport should send him to Parliament as a supporter of the No-Patronage Government.

The second is Mr. TUFNELL, a Whig official hack and nothing else. He is Sir WiLsurr Honrox's son-in-law, was his secretary in Ceylon, and has since been private secretary to that jobber of jobbers the Lord MeLviLLE of the Whigs. Having failed at Colchester and Ipswich, he was invited to try Devonport by a small section of the electors, who have had other relations with him as Lord MisTo's private secretary. No one supposes that be has any other object than that of his own advancement in life.

The Radicals have a candidate in the person of Mr. LEAcn, who resides on the spot, and, while he is more independent as to property than either of the Whig candidates, differs from them altogether ni that sort

of independence which consists in having opinions of one's own. Decided political views seem to be this gentleman's incentive to becoming a candidate. s

The state of parties in the borough is this—The Whig-Radicals being Cordially united, would always be able to return one Member, and, so long as the Government assisted them, two Members ; the question of one or two being settled by the influence of Governmc.it with the Dockyard voters, about 200 in number. Under the most favourable circumstances the united 'Whigs and Radicals cannot command a majority of more than 100 in a constituency of 2,5-00. It follows that a split between the Whigs and Radicals at once throws the borough into the hands of the Tories. The Whigs, who are weaker than the Radicals, have endeavoured to carry matters with a high hand ; and this the Radicals have at length found spirit to resent. The language which they now hold is this—" We know that we cannot return our man without the 'Whigs ; but neither can they return their man without our help. In the present case, we have subscribed for the legal expenses ; and we will propose our man and vote for him at all events. If the Whigs withdraw their two candidates and join us, we Eitel' return our man ; and in that ease, we will support their man (Sir G. GREY) at the next election, but not otherwise. In short, it comes to this—one Radical as well as one Whig, or else two Tories. We will no longer submit to the Whig demand for both Seats, when, in truth, of the Whig-Radical party the Radicals form a Majority."