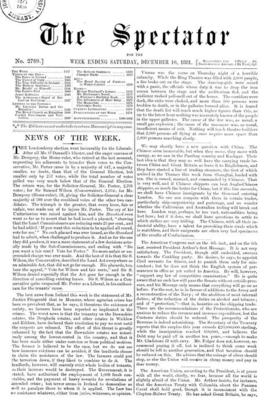 The American Congress met on the 4th inst., and ou

the 6t11 inst. received President Arthur's first Message. It is not very satisfactory. The President, though still undecided, swerves towards the Conkling party. He desires, he...

T HE Londonderry election went favourably for the Liberals. After all Mr. O'Donnell's bluster, and the eager canvass of Mr. Dempsey, the Home-ruler, who retired at the last...

The best news from Ireland this week is the statement

of Mr. Justice Fitzgerald that in Munster, where agrarian crime has been so prevalent that, as he says, it threatens the existence of society, no farmers have been reported as...

We may shortly have a new question with China. The

Chinese seem immovable, but when they move, they move with energy, as we saw in the Panthay country and Kashgar. Their last idea is that they may as well have the carrying trade...

'lc * * The Editors cannot undertake to ret urn Manuscript in

Vienna was the scene on Thursday night of a horrible

calamity. While the Ring Theatre was filled with 2,000 people, a fire broke out ou the stage. The dancing-girls were seized with a panic, the officials whose duty it was to drop...

The American Union, according to the President, is at peace

with all the world, chiefly, we fear, because all the world is slightly afraid of the Union. Mr. Arthur insists, for instance, that the American Treaty with Columbia about the...

We regret deeply to see a statement that the Indian

Govern- ment has • proposed to reimpose the Income-tax, in order to abolish the cotton duties. The step is a most dangerous one. India is not a democratic country, but a country...

in a speech of considerable ability. Of the admirable section of it devoted to Ireland we have said -enough in another column. In attacking " Fair-trade," Mr. Rathbone showed...

There is a certain improvement in the tone of some

of the Conservative speeches,—though we cannot include Lord George Hamilton, who only translates Lord Randolph Churchill into rather more Parliamentary language. Sir Hardinge...

Great excitement has been created in Scotland by the dis-

covery that the body of the late Earl of Crawford and Balcarres, which was embalmed in Italy and brought home, has been carried off from the family tomb annexed to Dunecht...

M. Gambetta will, we imagine, carry his revision of the

Senate. Among the hundred Senators who go out in January are M. Leon Say and two colleagues for the Seine-et-Oise. They have met their constituents, and have felt obliged to...

No one has explained what the puzzle-headed call the "

Exports and Imports" puzzle, more lucidly than Mr. Dillwyn, in his address last week at Morriston. In the first place, he showed, by a very exceptional instance, no doubt, but...

a letter to Monday's Times, how much at sixes-and-sevens the Tory leaders are on the Fair-trade question. Thus, while Sir Stafford Northcote considered it a mischievous...

A meeting is to be held on Tuesday to determine

the form of the monument to the late Dean of Westminster ; but it is already known what is to be proposed. In the first place, there will bet a tomb to Dean Stanley himself,...

S. Mancini, the Italian Minister of Foreign Affairs, delivered a

great speech on Wednesday. The full report has not arrived, but he appears to have said that France had subjected Italy to unjust treatment in Tunis, that the King had,...

Immense fuss is made in Vienna about a question between

the Austro-Hungarian Government and Roumania. Whenever the Imperial Government wishes to hint to Roumania, that she had better be civil, it discovers that cattle disease exists,...

Mr. E. Clarke also made a thoughtful speech to the

members of the Rotherhithe Conservative Association on Wednesday, on the proposals for gaining time in the House of Commons. He heartily desired to see Bills which had been read...

Why does the Tines insert with all the honours the

letters signed " E. P. B." ? So far as we can remember, those initials have for fifteen years or more uniformly appeared at the bottom of letters intended to injure Liberal...

Mr. Bright made a fine speech at Llandudno on Thursday,

after laying the foundation-stone of the first Board School. He dilated on the vast waste of the national money on foreign wars, concerning, for instance, such matters as the...

THE PAUSE IN IRELAND. T HE Tory papers are very indignant at the announced resolution of the Government to hold no Cabinet Councils in December. Here, they say, is all Ireland...

THE UNREST OF ITALY.

T HE cause of the visible unrest of Italy in all foreign affairs is not, we believe, ambition, as most of our con- temporaries declare, but fear of a very complex kind. Its...

THE TRUE DIFFICULTY IN IRELAND.

C ANON DENNEHY'S letter to the Freeman's Journal, republished by the Times on Tuesday, throws a more vivid light on the true difficulty of the policy of justice in Ireland, than...

T HE sentences in the recent Bribery trials have naturally excited some hostile comment. If bribery is really to entail all the unpleasant incidents which attach to the life of...

-E NGLISHMEN are so accustomed to consider themselves foremost in all that relates to the machinery of busi- ness, that the news that they have been outstripped by Turkey in one...

MR. BRIGHT ON HIMSELF.

M R. BRIGHT teaches us a great lesson on the advantage which a man gains in politics by the power of brood- ing over his own thoughts. That is a power which is, on the whole,...

I T is quite time that the truth should be told about these incessant Jewel robberies. They are very discreditable both to our civilisation and our police ; but the fault rests,...

THE ASTRONOMER-ROYAL OF IRELAND ON EVOLUTION.

T HE Royal Astronomer , of Ireland has popularised very effectively the new doctrine as to the great influence of tides on the motions of planetary bodies, like the Earth and...

MR. LLEWELYN DAVIES AND THE RITUALISTS. [TO THE EDITOR OF THE " SPECTATOR."] SIR,-It is high time that my name should disappear from your columns, but I am unwilling to leave...

[TO THE EDITOR OF THE "SPECTATOR, " ) SIR, — We have just seen the last sentence of the law carried out on a fellow-creature. Our sense of the sacredness of human life has been...

THE BROAD CHURCH ON RITUALISM.

ITO THF: EDITOR OF THE " SPECTATOR. "] SIR, —In your last number, in the article headed " The Broad Church on Ritualism," you refer to the First Prayer-book of King Edward VI....

[TO THE EDITOR OF THE "SPECTATOR. "] your article on "The Bribery Sentences," you infer that all the solicitors made false returns. I desire to point out, in fairness to Mr....

[TO THE EDITOR OF THE " SPECTATOR."] SIR, — Snrely that is a sad article of yours in the Spectator of December 3rd on " Cheaper Books." You say, "As to the average Englishman,...

THE Exhibition of the Royal Society of Painters in Water-Colours, which opened to the public on Monday last, is one of unusual merit, and interest. It is, of course, nominally a...

BISHOP THIRLWALL'S LETTERS.* IF Bishop Thirlwall's Letters, Literary and Theological, had been published without the accompanying volume of Letters to aFriend, they would...

IN the preface to this romance in three volumes, the author says that the purpose of the book is to set forth " the vanity and folly of individual Hate." In other words, he...

FEW critical matters are harder to decide justly than those which turn upon the reception that should be given to the- works of those exalted personages whose position in the...

NONE of the Magaziues contain this mouth anything very striking, though Mr. Julian Hawthorne commences in Macmillan, what promises to be a most original story. The most readable...

THE ADVENTURES OF HERR BABY.*

Mits. MoLcswoaTn's Christmas tales are all charming, and some of them truly pathetic, but she has never given us anything of the lighter and more agreeable kind more fascinating...

The Sunday Magazine for 1881. The Paths of Peace (Sunday

and Co.)—The author intends this book to serve as an index to the phraseology of Shakespeare,—a concordance of phrases rather than of words. As stated in the preface, its plan...

usual good things, the first and most important is the annual fairy-story play, in verse, for young people to act in the Christmas holidays. It is the Brother Grimms' "...

Wilson's Tales of the Borderers. Selected and edited, with bio-

graphical notices of the contributors, by J. Tait. (The Edinburgh Publishing Co. ; and Simpkin, Marshall, and Co.)—In this edition, Mr. Tait has collected, within the compass...

ERSATLIM. — In our last issue, we said that Peter Parley's Annual

is issued by its new publishers, Messrs. Roatledge. The publishers are Messrs. Cassell, Petter, Galpin, and Co.