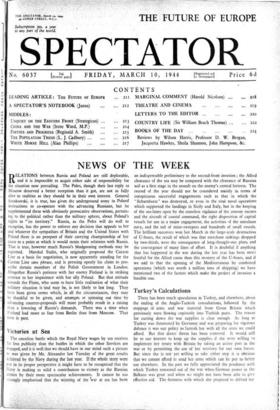 R ELATIONS between Russia and Poland are still deplorable, and it

is impossible to acquit either side of responsibility for NEWS OF THE WEEK the situation now prevailing. The Poles, though their last reply to Moscow deserved a better...

The ceaseless battle which the Royal Navy wages by sea receives far less publicity than the battles in which the other Services are engaged, and it is well that we should have...

There has been much speculation in Turkey, and elsewhere, about the ending of the Anglo - Turkish consultations, followed by the stoppage of arms and war material from Great...

Echoes of the "New Despotism"

Last Sunday Mr. Herbert Morrison, after posing a very serious and as yet unsolved problem, went on lightheartedly to offer a solution which, if it were put forward by any...

Public opinion has been deeply stirred by the fact that the immediate consequence of raising the minimum wages of miners has been a strike on a formidable scale in South Wales...

The Railways in War-Time

The first of the annual general meetings of' the railway companies —those of the L.M.S. and the L.N.E.R.—were held last week, and their chairmen justly indicated the vastness...

Members of the House of Commons, whose correspondence tells them a good deal about the grievances of their constituents, are always peculiarly sensitive, and rightly so, to...

THE FUTURE OF EUROPE

I N the extremely interesting Sidney Ball lecture which he delivered at Oxford last week, Sir Walter Layton added one more to various useful contributions to the discussion of...

T HE verdict in the Pucheu trial at Algiers has not been given as I write. It may not be the acquittal which all the evidence as published seems to require. The course of the...

UNQUIET ON THE EASTERN FRONT

By IRENE WARD, M.P. I N talking to a gathering of journalists after my return from China a week or two ago, I found that apart from Reuter's Chinese correspondent, no one was...

By REGINALD A. SMITH I T is easy for an ardent advocate of Proportional Representation to find unkind explanations of the opposition to the whole principle which is maintained...

By L. J. CADBURY C OMMENTING last week on the announcement of the names of members of the Royal Commission on Population, the Prime Minister said : "There is no branch of human...

By ALAN PHILLIPS horses carved in the chalk of the neighbouring shires, but they date from the eighteenth century. Probably only the Long Man of Wilmington in Sussex and the...

By HAROLD NICOLSON W HEN I lived in Berlin during the last years of the Weimar Republic I used to be Impressed by the manifold activities of the publishing house of Ullstein....

I HAVE been examining this week the results of American film industry polls and awards for 1943, some of which have just come to hand. The best known of them, the Academy of...

THE THEATRE Ii is not often that Hamlet is being played simultaneously at two London theatres, and a comparison between the production at the New Theatre and this at the Scala...

CERTAIN parting does not wait its hour for separation ; too soon the shadow lies upon the heart and chokes the voice, its power drives on the minutes, it implies tomorrow while...

Sta,—In your issue of March 3rd you describe Russia's condition for peace with Finland as "remarkably lenient" after Finland had wantonly joined Germany. Now those same...

Snt,—Mr. Brailsford says in his letter that if they were

deprived of machine tools "Germans will starve." Why? Even if Germany were completely de-industrialised—which no one seriously proposes—this need not happen, given a new...

SIR, —Some of your pro-German correspondents frighten me. Don't they frighten anybody else? Soon after the 1914-18 war we left the Germans in possession of their country and...

LETTERS TO THE EDITOR Sta,—During the five months that I have been in Italy, I have been astonished at the apathy and the lack of interest shown by the average Italian...

"HOLES IN THE CHARTER"

Slit,—Your article on the Atlantic Charter is timely and important, since there are so many rigid and meticulous minds whose fears must be allayed, and it is these fears that...

SIR, —The Derbyshire election was generally expected in the Midlands to be a close one, and the majority of 4,000 against the Government candidate shows the Derbyshire people...

gt,-I saw a letter in your issue of February 25th under the heading "Disarming Germany" by Mr. A. G. Bateman, in which he suggests t Germany must be deprived of a motor...

Snt,—I have read Mr. Brailsford's book, Our Settlement With Germany,

and while I am not qualified to criticise his treatment of many of the questions which he discusses, I certainly feel that some of his views on disarmament and reparations are...

THE SUBSTANCE OF SOIL

Stn,—I have read Sir Albert Howard's letter, and after thirty years' experience of growing crops with chemical fertilisers I want to challenge almost all his conclusions. It is...

ONE surprising omission has been made by all—so far as I have seen— of the many who have joined in the discussion on land fertility. For example: in comparing the relative...

SIR,—Your article summarising the White Paper on the proposed National Medical Service leads me to suggest that no matter how comprehensive in Intention the various schemes for...

PRICES AND WAGES SIR,—It would be interesting to learn the

source of and foundation for Mr. Gilchrist's belief that "clergymen have this year received an addition of 7 per cent, to their stipends." Whence? When? How? Is he by any chance...

YOUTH AND THE NEW ORDER

SIR,—If the silent millions of your emotional young Marchioness are in fact silent, what evidence has she for inferring that they have found inspiration and strength in...

Mine Horn is Exalted

THE monte is the brush, the formidable, thorny, cactus-infested brush of Texas. Professor Dobie knows the brush from his earliest childhood. "The brush has thorned me, but it...

Aspects of Truth The Truth About the Munich Crisis. By Viscount Maugham. (Heinemann. ss. LORD MAUGHAM, though he sat as Lord Chancellor in Mr. Chamberlain's Cabinet for...

AT the age when more privileged children are just entering a seven-year phase of advanced education, the great majority are thrown abruptly as wage-earners into the economic...

No Outspan. By Deneys Reitz. (Faber and Faber. xis.)

Tins record of later years, in which the present High Commissioner for South Africa continues the story of his life begun in Commando and Trekking On, throws interesting light...

Ramsay Muir. Edited by Stuart Hodgson. (Lund Humphries. 8s. 6d.) PROFESSOR RAMSAY MUIR was an able historian, as such works as The Expansion of Europe testify, and an active...

SOLUTION TO CROSSWORD No. 259 SOLUTION ON MARCH 24th

The winner of Crossword No.. 259 is MRS. JOYCE, The Glebe, Long Ashton, Bristol.

T1-iE SPECTATOR" CROSSWORD No. 261 IA Book Token for one

guinea will be awarded to the sender ef the first correct sclution of this week's crossword to be opened after noon on Tuesday week, March 21st. Envelopes should be received not...

Grey and Scarlet. Edited by Ada Harrison. (Hodder and Stoughton.

6s.) Tuts book, to which H.M. Queen Mary writes a foreword, consists of letters and reports sent by Army Sisters on active service to their Matron-in-Chief, Dame Katherine...

THIS is a really admirable and unusual anthology. It is

full of interesting matter drawn from unexpected as well as obvious sources. It also, unlike the majority of anthologies, has a plan, and the authors stick to this plan and have...

By CUSTOS HOLDERS of home railway stocks are entitled to draw some en- couragement from this year's annual meetings. It is not merely that the directors have accepted...