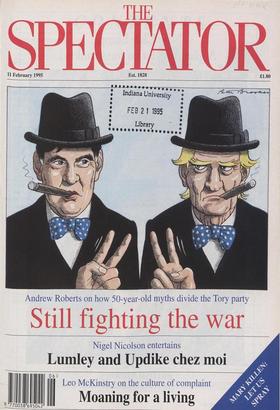 Brief encounter. M r John Major, the Prime Minister, said in a speech that a single European currency would 'tear the European union apart' if economic conditions were not...

Certain people would prefer to see a return to bombing in Ulster than to see Major triumph BORIS JOHNSON M ost of my readers are doubtless too fastidious to have dipped into...

N ext Friday, a Labour MP, Tessa Jow- ell, will place before the House her private Tobacco Smoking (Public Places) Bill 'to control smoking in public places and to make...

A deeply sensitive man, but at the same time a man without pride CHARLES MOORE W hat do you think of this assessment of the Prime Minister? For John Major 'keeping all the...

The Conservative split over the European Union is a direct result of our national obsession with the second world war, argues Andrew Roberts WHY ARE YOU proud to be British?...

Kevin Myers lambasts the Chic Intolerant Liberal Tendency, which senses a unionist plot in any criticism of the Irish peace process Dublin ONE OF the most extraordinary...

Andrew Stephen reports on the attempts by the new American Speaker to crush public sector broadcasting Washington PERHAPS THE MOST surreal eight hours I have ever spent came...

SOME CORNER OF A FOREIGN FIELD

Simon Courtauld fears that the Foreign Office is poised to sell off all that is British and sacred on the Costa del Sol Malaga ACROSS the street from the bull-ring, opposite...

MOANING ALL THE WAY TO THE BANK

Leo McKinstry, former head of personnel at Islington Council, reveals how slackers and malingerers are the new workplace tyrants I HAD ALWAYS thought that police offi- cers...

persist.. . MEDICAL TEXTBOOKS, even the longest and most pedantic of them, often have curious lacunae. For example, you may search in vain in the index of any of them for a...

PEOPLE WHO devise public announcements are notoriously prolix and artificial as stylists. This is not nec- essarily because they are functionally illiterate. It is because they...

THE WEEK has been a terrible one in point of weather, the thermometer recording at Greenwich 22° of frost, and in Loughborough, Lincolnshire, 30°. This does not surpass any...

How one woman rejected the world and still lived to enjoy it PAUL JOHNSON I n a world increasingly dedicated to suc- cess and an ever-expanding gross national product, social,...

In which Ken and Eddie hunt woozles and go round and round in circles CHRISTOPHER FILDES J okier than Middlemarch and. more authentic than The Buccaneers — I can reveal that...

Sir: Mr Paxman (`Seven types of evasion', 7 January) was quite correct in saying that Winston Churchill (whose private secretary I was from 1952 to 1965) did not engage in...

Sir: The Labour Party's opposition to rail privatisation and its possible intention to reverse any such measures when (and if) it comes to power is at odds with its professed...

Sir: I was interested in Simon Jenkins's arti- cle in

the 21 January issue. However, I would like to point out that he implied that The All England Lawn Tennis and Croquet Club (Wimbledon) did not admit women. This is not correct....

Sir: Your leader on legal aid (4 February) needs correction in two important respects. First, the Maxwell brothers have not been given a blank cheque by the Legal Aid Board to...

Sir: May I make one small correction to Simon Jenkins's admirable article on clubs and women (Centre point, 21 January)? This club did not come to its present address 20 years...

Sir: Keith Waterhouse (Diary, 4 February) might be interested to know that the com- poser Percy Grainger used the word louden', where less Australian musicians are content with...

Sir: Mr David Martens has been misin- formed (`Takeover of the teenage scrib- blers', 21 January). The 'smack of firm gov- ernment' was not a Daily Telegraph leader, which would...

Sir: Simon Winchester has discovered, as journalists do from time to time, sex on the Internet (`An electronic sink of depravity', 4 February). He says he came across `alt.sex....

Sir: I think we should be told which bits of Mr Al Fayed's letters (latest, Letters, 4 February) are written by him. If they are the good bits, you should give him a col- umn....

Sir: So we are back to breast-beating again and ignoring the historical context (Centre point, 4 February). I remember, as a child, emerging from a cellar in the centre of...

Sir: About this maggots/wounds business. When I was in the soldiers' ward of Manor Hospital, Walsall, in 1944, another inmate, bullet wounds in his upper arm and suffering from...

Sir: My brother was one of the innocent victims of the murderers who planned and caused the destruction of Pan Am Flight 103. Perhaps I should therefore be 'Crying out for...

The government of London is not a shambles. It is just thoroughly incompetent SIMON JENKINS T wo weeks ago an event took place that would once have been headline news. A...

For those who greatly drink Philip Hensher LOUIS MACNEICE by Jon Stallworthy Faber, £25, pp. 608 F o r rather too long, Louis MacNeice has been inextricable from the group of...

Scots of the middling sort

Frances Partridge BOYFRIENDS AND GIRLFRIENDS by Douglas Dunn Faber, £14.99, pp. 262 S hort stories appear to be unpopular with publishers and booksellers, in spite of the...

The conflict of right and right

Raymond Carr ISAIAH BERLIN by John Gray HarperCollins, f18, pp. 224 T he blurb of this book advances the claim that Isaiah Berlin is `the nation's greatest thinker'. Few would...

Not only a gent but an agent

Milton, thou shouldst not be living at this hour

Ronald Mutebi OBOTE: A POLITICAL BIOGRAPHY by Kenneth Ingham Routledge, f37.50, pp. 228 M any words have been written and spoken about Milton Obotc and the role he played in...

They speak a language of their own

Christopher Howse EMPIRE OF THE WORDS: THE REIGN OF THE OED by John Willinsky Princeton, $22.95, pp. 258 OXFORD ENGLISH DICTIONARY, ADDITIONAL SERIES, VOLUMES I AND II edited...

The 'innocents' were not guilty of much

It's a hygenic lovers' tiff That starts with if and only if And tails off like a doctor's note. How could you write the things you wrote, Scaremongering? I'm sure we'll live....

Not sparing the horses or the troopers

Cosi fan tutte (Royal Opera House) King Priam (London Coliseum) Much too cosy Rupert Christiansen D elayed at the office by some idiot on the telephone, I ran like fury...

Leon ('18', selected cinemas) Lost in translation Mark Steyn I wonder if you could make Casablanca these days. Or The African Queen, Grand Hotel, Roman Holiday. . . Was there...

Store wars Taki o ne is loathe to criticise certain letters to the editor because — at least in one case — one never knows who wrote them. In last week's Spectator, a letter...

Last of a kind Ian Hislop C olonel A.D. Wintle M.C. decided that a solicitor had swindled his sister out of her rightful inheritance from an elderly relative. `So I held him...

A limp year Jeffrey Bernard L ast Wednesday was the anniversary of having my right leg amputated. It doesn't seem like a year ago. With the loss of inde- pendence and the...

Wasting time over lunch Holly Budd L ike it or not, lunch is essential to office life. There are of course those who don't want it or disapprove, while others, such as my...

Absolutely magnificent Nigel Nicolson H ave you ever invited to a dinner- party someone whom you much admired but had never met? I have. And did she come? She did. She was...

Sideshow Raymond Keene THIS WEEK the qualifying matches in the semi-final of the Fide World Champion- ship commence in Sanghi Nagar, India. The format is innovative, in that...

ISLE OF i/SINGLE VALE SCOTCH 1,111S10 ISLE OF tuR 4LI 4 A SCOTCH %HUI COMPETITION Club of Queer Trads Jaspistos IN COMPETITION NO. 1867 you were invited to write a poem,...

A first prize of £25 and a bottle of Graham's Malvedos 1979 Vintage Port for the first correct solution opened on 27 February, with two runners-up prizes of £15 (or, for UK...

A false dawn Frank Keating IN THE END, the occasional glimmers of brighter possibilities were themselves utter- ly infuriating and in a way even accentuated English cricket's...

Dear Mary. • • Q. We work in an office with a colleague who has an infuriating habit of conducting lengthy personal telephone calls during working hours. We do not object to...