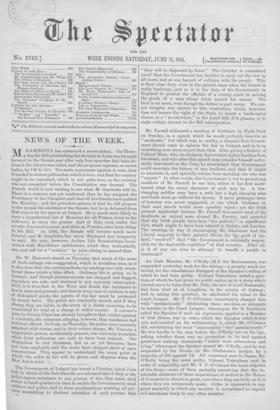 Sir W. Harcourt stated on Thursday that much of the

news of Irish outrage was exaggerated, which is doubtless true, as it Is also true that the correspondents, by sending over only sensa- tional items create a false effect....

An Irish Member, Mr. O'Kelly (M.P. for Roscommon), was suspended

yesterday week for the sitting,—a penalty much too trivial, for the ostentatious disregard of the Speaker's ruling of which he had been guilty. Colonel Tottenham asked a ques-...

Mr. Parnell addressed a meeting of Irishmen in ,Hyde Park

on Sunday, in a speech which he would probably describe as " moderate," but which was, in reality, a demand that Govern- ment should cease to enforce the law in Ireland, and in...

The Government of Ireland has issued a Circular, dated June

2nd, in which all the Sub-Sheriffs are informed that if they or the Police expect resistance to any process of law, they must send notice to head.quarters in time to enable the...

M GAMBETTA has sustained a severe defeat. On Thurs- • day the Bill establishing the &rutin de Liste was brought forward in the Senate, and after only four speeches had been de-...

Lord Derby made a speech at Leeds ou Monday on

Co-opera- tion, which, besides the usual praises of that form of copart- nership, contained some striking social reflections. Like Lerch Macaulay, Lord Derby thinks that a...

Mr. Plunket, M.P. for the University of Dublin, delivered an

address before the Conservative Association of Glasgow yester- day week, the main purpose of which was to prove that the Government are responsible for muddling away the time of...

Sir Richard Cross spoke on the same day at St.

Helen's, beginning his speech by insisting on the surpassing greatness of Lord Beaconsfield, on "what he had done for the country, what self-sacrifices he had made ;" then...

Sir Stafford Northcote explained on Friday week, during the little

debate which followed the motion for the adjournment over the Whitsuntide holidays, the famous statement made by him on April 16th, 1878—before the three weeks' Easter holiday...

The debate on the Irish vote of censure was concluded

yesterday week, when there voted for the censure 22, and against it 130. The debate ranged very wide of the facts of the case, and was remarkable chiefly for a very moderate and...

We regret deeply to notice the death of Sir W,

M. James,, one of the Lords Justices of Appeal, which occurred on Tues- day. Lord Justice James was the strength of his Court, a learned and painstaking lawyer, who, familiar...

Mr, Chamberlain made an admirable speech at Birmingham on Tuesday.

He remarked that it was evident from Lord Salisbury's speeches that the Tories had learnt nothing and for- gotten nothing since the general election. It was true that Sir...

Some excitement has been caused this week upon 'Change, by

a telegram stating that the Indian Gold Mines Company, of Glasgow, the Company so many of whose shares belonged to the City of Glasgow Bank, has been crushing quartz with an...

Mr. Monk's resolution against the conclusion of any com- mercial

treaty with France based on the reactionary general tariff of France, and not tending to the development of free commercial interchange between the two countries, was carried by...

On Thursday in last week, Sir John Lubbock detailed to

the Linnsean Society some very curious experiments on the sensi- tiveness of ants to light and colour. Apparently, they prefer for their grubs even white light—from which what...

Abdurrahman has defeated Ayoub. Two Sirdars, adherents of the latter,

advanced with an army of Heratees upon Ganda- "la and had, on the 3rd inst., reached Girishk. Here they were attacked by the Ameer's forces, who, after a severe con- ! test, in...

This Land Bill seems to move Conservatives out of them-

selves. Lord Carnarvon is usually moderation itself, but at 13arton-on-Trent on Tuesday he ascribed all evils of the situa- tion directly to Government, including even the...

It is noticed this week as a new fact that

the Russian Government has begun to distrust the Army. Officers of the Navy have often been arrested for Nihilism—perhaps because the Navy has been so often entrusted to...

Sir William Thomson, in a very interesting letter to Thurs.

day's Tinzes, points out that the new discovery made by M. Faure for the storage of electric force, will enable the engines which produce electric force to work when it is not...

THE GOVERNMENT IN IRELAND. I T is folly, and worse than folly, to make of the condition of Ireland a party controversy, for the Tories, were they in power, would be compelled...

MR. CHAMBERLAIN AND THE WHIGS.

N OTHING is more common than to hear Tories or dis- affected Whigs say that the Liberal Government might have been all very well but for the revolutionary element it contains....

THE PRINCE OF BULGARIA.

T HE main difficulty in forming a definite opinion upon the recent action of the Prince of Bulgaria, action which may produce immense results, is the obscurity of his personal...

THE TORY PARTY AND THE CLOTURE.

M R. PLUNKET, the senior Member for the University of Dublin, is so moderate and thoughtful, and usually so wise a Conservative, that we have read with great regret his speech...

THE UNIVERSITY OF DURHAM AND WOMEN STUDENTS.

F OR some time past, considerable pressure has been brought to bear upon the University of Durham, to induce it to make provision for the education of women. The Memorials...

THE CATHOLIC CHURCH AND M. LITTRE.

T T is very dif fi cult for either Protestants or Sceptics to be quite just to the Roman Catholic Church in a case like that of M. Littrd. That eminent savant was throughout his...

THE STATE OF AFFAIRS IN EGYPT.

T HERE have not been wanting numerous signs during the present year that the state of affairs in Egypt is very far indeed from being completely satisfactory. No Eastern country,...

W E suppose that the " pride of life " and the grace of humility will always be the chief moral constituents of all genuine fairy-tales and the tales most nearly allied to them,...

THE GYMNASE COMPANY AT THE GAIETY THEATRE.

T HE Management of the Gaiety Theatre is repeating its mistake of last year, apparently untaught by its experi- ence in the case of the performances of the Palais Royal Com-...

VIVISECTION. [To THE EDITOR OP Tall "SPECTATOR.") STE, — Mr. Romanes says that the "exaggerations of which he complains, as used by the agitators" (against Vivisection), " con-...

ere THE EDITOR OF THE "SPE0TATOR.1 Sne,—I do not write on a question of scholarship; on that point I am no authority. But it seems to me that the determination to do without...

THE REVISED VERSION IN CHURCHES.

rye TIM EDITOR OF rue " SPECTATOR."] Sin,—Are you not a little peremptory in ruling that " if the Revised Version be adopted for public reading in our churches, it must receive...

[TO me EDITOR OF THE "SPEOTATOR.1 SIR,—If I may be

allowed a few lines in reply to your editorial note on my letter, I should like to observe that you are mis- taken in supposing that I would no more consent to endure one of Dr....

[TO TDB EDITOR OF THE n SPECTATOR. "] em,—If the subscriptions to Mr. Carlyle's Memorial have been slackened by the perusal of his " Reminiscences," as Mr. Roden Noel indirectly...

THE UNPOPULARITY OF SALMON.

[To THE EDITOR or TUE STEOTXTOR..] Srn, — About thirty years ago I had to visit Castle Douglas and Newton-Stewart, and in the coffee-room of the principal inn in One of those...

THE GROSVENOR GALLERY. [CONCLUDING NOTICE.] WE must say a few more words upon one or two of the pictures in the largo west gallery, though we have in our previous articles...

TALLEYRAND AT VIENNA.* Tun letters included in these two volumes—translated into ver lucid and vigorous English—provide most interesting reading but it is to the historian, and...

THE LOVE SONNETS OF PROTEUS.*

THERE is plenty of power, passion, egotism, and licence in these poems, which leave a rather unpleasant impression, though one of .considerable literary force. They are written...

is a well-known bookmaker, and in so eallinghim we have no intention of using the word "bookmaker" 10 any depreciatory sense. In an ago when readers include men and women of all...

TO THE CENTRAL AFRICAN LAKES AND BACK.* So far as

the history of English publishing enterprise is con- cerned, 1881 will evidently be known as the year of Africa ; and no higher compliment can be paid to the latest and youngest...

THE LATE PROFESSOR BREWER'S ESSAYS.* This volume contains, besides a

prefatory memoir of the author, a sermon on the Psalmist of Israel, five articles reprinted from the Quarterly Review, two of an earlier date from the National Review, an...

"LIFE AT TWENTY-FIVE."* Mn, STEVENSON has given us D. charming

collection of essays in Virginibus Puerisque. Like all his work, it is suggestive, piquant, and full of graceful exaggeration. In his preface he says for what purpose these...

Fon about two centuries, with but brief intervals, the Protest- ant inhabitants of France were subject to the most bitter cruel- ties on the part of their rulers. The most...

The Poetry of Astronomy. By Richard A. Proctor. (Smith, Elder,

and Co.)—The most interesting of the essays in Mr. Proctor's work are those which deal with the age of the Earth, and of other members Of the Solar System. "Man's duration in...

Co,)—For a lazy person with a constructive imagination, books like Three Hundred Years Hence, which deal with the terrestrial future of mankind, have peculiar fascination. Mr....

(Sampson IV and Co.)—Tho "historical novel," so to call it, which has the narrative of the Now Testament for its base, is seldom successful ; but it must be allowed that Mr....

1 Beethoven, Depicted by his Contemporaries. By Ludwig Nohl. II . Translated from the German by Emily Hill. Of all !the numerous 1 writers on Beethoven, Ludwig Nohl has a claim...

—The story of Sydney maybe told in not many more lines than Miss Craik has given volumes. She has an incipient love-affair, beginning with a little wholesome aversion, with a...