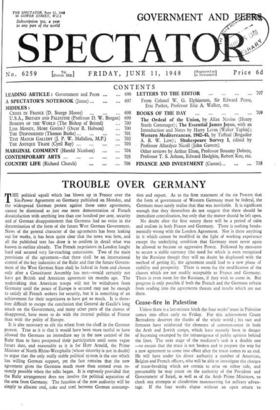 Unless there is a last-minute hitch the four weeks' truce in Palestine comes into effect early on Friday. For this achievement Count Bernadotte deserves the thanks of the whole...

T HE political squall which has blown up in France over the Six-Power Agreement on Germany published on Monday, and the widespread German protest against those same agreements,...

Mr. Taber versus The World Representative Taber, the Chairman of

the Appropriations Com- mittee of the United States House of Representatives, who first promoted the move by that committee to reduce Marshall Aid funds for the next twelve...

There is something to be said for breaking away from the custom that Greece only gets into the news when the news is bad. It is still much too early to expect the total...

What secrets lie hidden behind Dr. Benes' letter of resignation we shall very likely never know. That will depend on whether he remains in Czechoslovakia or decides to live...

It is becoming plainer every day that the drift of the Scandinavian countries towards joint defence and closer association with the West is mainly being held up by the policy of...

The Report of the Committee on Milk Distribution, published at the end of last week, is a valiant attempt to reconcile national control with free competition. The retailing of...

T HE political correspondents of our daily newspapers are never satisfied. Having been gorged for three years with vast meas- ures of reform, crises internal and external, party...

There is a considerable air of unreality about the legal arguments initiated by Lord Goddard's recent allegation in the House of Lords that the Home Secretary, in announcing,...

T HIS week's debate in the House of Lords on the Bill to amend the Parliament Act has been for the most part profoundly depressing. Behind the immediate proposalâto reduce by...

The Thames no doubt in some of its reaches can

disseminate odours which are not precisely those of Araby, and samples of its waters taken at Godstow and at Greenwich might on analysis show some difference. But the historic...

And what of Mr. Dalton's functions ? That is easier

to ask than to answer, and Mr. Morrison declined (quite legitimately) to answer it on Tuesday. Something to do with the Foreign Office was sug- gested ; but that is not so....

Mr. Harold Laski is creditedâor perhaps discredited--with writing in the

New York Post that "the British Government has done more damage to the honour and prestige of Britain in the past week than our enemies have been able to inflict on us since the...

The proposal to revise Bank Holidays is interesting. It is

seventy- seven years since Lord Avebury, then Sir John Lubbock, M.P., achieved immortality (which he might, no doubt, have gained on other counts) by inventing the August Bank...

A SPECTATOR'S NOTEBOOK I SUPPOSE the tragedy of Benes is in

a sense no greater than 1 the numberless personal tragedies for which Communism in Europe is daily responsible. But this, of course, is much more than a personal tragedy ; it is...

Will (now Lord) Henderson, the elder of the late Arthur

Hender- son's two sons, who becomes a Parliamentary Under-Secretary of State at the Foreign Office, has so far been less in the public eye than his younger brother Arthur. While...

By D. STURGE MOORE T HE sudden ebullition at the National Assembly which filled the couloirs with talk of crisis and resignation seems to have somewhat subsided, if only...

By OSCAR R. HOBSON T AST week I was paying my coal bill and a little Scottish lady was doing the same. While waiting for our receipts we got into conversation. I said: " Ten...

BISHOPS OF THE WORLD

By THE BISHOP OF BRISTOL O N July ist the bishops of the Anglican Communion will assemble for the five-weeks session of the eighth Lambeth Conference. In the public mind the...

By THOMAS BURKE T HE refugee camp had once been a dynamite factory. Lawns graced the flat roofs, and trees lined the roadways through the camp. It was said the factory had...

By J. P. W. MALLALIEU, M.P. A T the beginning of almost any game or sporting fixture the excitement of the crowd relieves itself in a shout, the hopefully defiant, partisan...

By CYRIL RAY W HERE does it all come from ? Four million pounds' worth of antiques are on show at the Antique Dealers' Fair at Grosvenor House, which the Princess Royal opened...

By HAROLD NICOLSON I SELDOM go to cinemas, but when I do so I prefer to be alone. I like to feel that if a moment comes when the illusion is broken, when I can no longer...

AT the first night of the Metropolitan Ballet at the Scala Theatre, and again at Giselle on June 7th at Covent Garden, I fell to wonder- ing, as George Moore would say, what...

Tivoli.) (Warner.)â" My Sister and I." 4 6 Deep Valley." (New Gallery, Deep Valley makes a sincere attempt to please everybody, those who love nature and animals, those who...

THE THEATRE You must, insists Dr. Libbard (a character best described as per- vasive, like the Duke in Measure for Measure), come to terms with life ; and in this adroit,...

The Nightingale This year I heard my first nightingale on

April 19th performing in a willow tree overhanging a dell only two hundred yards from the house. For several warm nights the " wanderer from a Grecian shore " competed with the...

The Summer Orchards Work in the apple-orchards never ceases. At

present the tractors are winding their way in and out among the trees, pulling wide cutters over the grass. My neighbour, the farmer, assures me that this is preferable nowadays...

ONE morning during the recent unsettled weather I stood at the gate to the cornfield that slopes away from my garden, southward to a disused quarry, and thence to the bottom of...

In My Garden A year ago I brought home from

a friend's garden in Le Lavandou, on the Mediterranean, a handsome cactus which I planted at the foot of a grass-bank in a sunk garden behind the house. It immediately began to...

JUNE has burst like a rocket and scattered a little constellation of brilliant exhibitions over London. Let us take them in chronological order. First there is Matthiesen's...

Snt,âYour correspondent in North Cornwall thinks that rabbit traps ought to be made illegal because of their cruelty. I don't know what his part of the country looks like, but...

TUG-OF-WAR IN GERMANY Sta,âThe German problem can only be approachedâif we are to keep it in its proper proportionâfrom the standpoint of the broad issues of today. The...

SIR, âIn his admirable article on Glubb and his Legion in your issue of May 28th Kenneth Williams refers to the part played by Glubb in instituting a series of forts in fhe...

Sni,âMay I reply to Mr. Bramley's letter in your issue

of June 4th. Under the 1939 Damage by Rabbits Act, it was illegal to set traps in the open, but during the war, under the Emergency Powers Act, this clause was suspended....

SIR, âIn reply to Mr. Godfrey Barrass may I observe that I did not â¢ discuss any legal question, but made a factual statement that the British Government never allowed the...

Sm,âWhilst agreeing with the views expressed by Janus on the futility of the " Distinguished CareerâNursing " stamping face, I should like to support the maintenance of its...

SIR,âThe law forbidding the steel gin to be set in

the open, as described by Jack A. Brantley in your issue of June 4th, has for years been dis- regarded in certain counties in England and Wales. The steel gin is used as a means...

SIR, âMay I respectfully disagree with your opinion that it would have been clearly unjust that Mr. Dalton's ministerial career should be much longer interrupted ? I take...

Sm,âI wonder why the name of Halifax was omitted from the last line of Mr. Nicolson's Marginal Comment in The Spectator of May 28th, and whether the omission was deliberate?...

StayâMay I be allowed to query the statement by Janus that a reader of The Spectator in New Zealand gets it in seven days?âYours, &c., rg Abinger Road, Portslade, Sussex....

Sm, â The controversy round bulk buying arrives at no conclusion. Is it not possible that these early, spasmodic attempts to develop a new business technique quite fail to...

Sm,âI am assembling material for a history of The Nineteenth Century during the first twenty-five years of its publication. I would be grateful if any of your readers who have...

SIR, âMr. P. V. Suckling suggests that I am wrong to use the word " Afrikanders " to indicate the Afrikaans-speaking South Africans. He states that it should be " Afrikaners."...

Snt,âMay I be permitted to correct a glaring misstatement in your Leading articleâPalestine Truce ? The Jews have never proposed to destroy the Arabs in order to establish...

Snt,âThe Spectator, in company with the rest of the British Press, regards the results of the recent South African election as depressing. Valuable newsprint has been devoted...

North and South CONTROVERSIES over the first American Revolution have pretty well died down ; controversy over what is sometimes called the second is as lively as it was three...

WHO on earth thought of this title for this book ? It cannot have been Mr. Levin, who remains what his publishers call him, " the foremost authority on Joyce," and who therefore...

The Railways of Britain. By 0. S. Nock. (Batsford. 15s.) EXCEPT for theology, the theme of railway communications must have inspired more popular or semi-popular books,...

THERE are obvious limitations to a book which sets out to tell the naval story of a major campaign that was fought, during the thirty months from November, 1942, to May, 1945,...

The Middle Span. By George Santayana. (Constable. 8s. 6d.) PERHAPS it is an illusion to hope that wisdom comes with old age, for Mr. Santayana seems to have become wise while...

RICHARD COEUR DE LION conquered Cyprus, almost accidentally, on his crusading journey to Jerusalem. Later he sold the island to the Templars for iocs000 dinars, and they in...

(Dent. 9s.) Journey Into Spring. By Winston Clewes. (Michael Joseph. 9s. 6d.) PERHAPS no modern novelist has better earned the right to speak harshly of his contemporaries than...

WHEN St. Paul affirmed that charity suffereth all things he

had not read this book. The one thing a biography has no excuse for being is dull; and this one is irredeemably dull. Mr. Stephen McKenna has chosen to write about his uncle not...

THE coinciding of the golden years of the revival of English music of the Tudor period with Sir Richard Terry's years as musical director at Westminster Cathedral was no mere...

for one guinea will be awarded to the sender of the first correct solution of this week's crossword to be opened after noon on Tuesday week 7une 22nd. Envelopes must be received...

SOLUTION TO CROSSWORD No. 479

By CUSTOS ALREADY in a tender condition, markets could not be expected to shrug off such a dismaying piece of news as the threatened cut in Marshall aid. Whether or not...