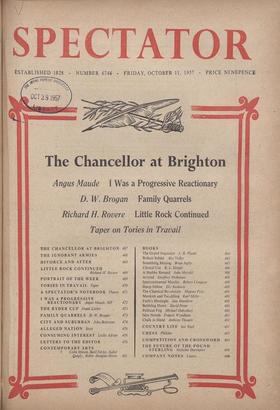 THE CHANCELLOR AT BRIGHTON

S O much responsibility rests these days on the Chancellor of the Exchequer that it is always a little frightening to read Mr. Thorneycroft's speeches. But he did very well...

rT4HE agenda for the Conservative Conference These are uninspiring principles, and the hostility to UN, taken in its context of reference to Suez, is alarming. A year ago at the...

NEXT WEEK CHRISTOPHER HOLLIS on Keeping up with the Rices

A LTHOUGH it is the Church's attitude to divor ce , which is exciting comment and criticism a' the moment, it seems to be much more sensible on this subject than the State. A...

By RICHARD H. ROVERE New York IT has taken the launch- ing of the Soviet moon to drive Little Rock, Arkansas, down to second place in the news. But Governor Orval Faubus â...

l'IGeNTERAL it seems to me that Russell is at his most r effective when he is basing his argument on an It .istorical indictment of .Christian belief and prac- ! Ic e. â¢ â¢ -...

ALL the ordinary noises of a usually uproarious news season have of course been drowned this week by the much-recorded radio voice of the Russian earth satellite launched last...

ins principal defect seemed to be a failure to conceive a movement as an organic whole.âDaily Express, September 23. . . . HE showed an admirable sense of proportion, never...

that if any country spends a large portion Â°f its resources on scientific research and educa- tion, it will achieve results. I say 'scientific' deliber- ately. In Britain we...

THE FUSS BEING CREATED about the Soviet launching of the first arti- ficial satellite is tiresome from several points of view. Leaving aside such obvious bits of lunacy as â¢...

COUNTRY BUMPKINS LTD., that inexhaustible store- house of misery for

everybody Mr. Randolph Churchill thinks ought to be made miserable, has just produced a pamphlet (The Conduct of the Socialist Allies) on the Brighton conference of the Labour...

I EXPECTED the Labour Party conference to con- demn the

Government for abandoning the Shops Bill, but it was done with a log-rolling insouciance that left me slightly out of breath. The motion was proposed by Mr. Birch, of the...

THUMBING OVER the latest Arts Council report I found myself

thinking that anyone who wanted optimism about the future of the arts would do well not to read it and avoid being depressed. As the report remarks, in a time of financial...

BREVITY IS RARE enough in politicians, but I can't help

thinking that in this extract from her book, Letters to My Daughter, Dr. Edith Summerskill overdid it: 'My advice to the generous-hearted girl who finds it difficult to resist...

AS IF THE harassed writers of the Beaverbrook press weren't

miserable enough with their enthu- siastic support for the Anglo-Canadian trade plan which received a very cool reception indeed over there (the double think indulged in by an...

I Was a Progressive Reactionary

By ANGUS MAUDE, MP I T is now just twenty-five years since I first moved a resolution at a Conservative Party Conference. That is neither here nor there as far as party...

By D. W. BROGAN T AST November, some members of a Rotary Club in East Anglia (which I occasionally ad- dress).refused to come to the annual, Thanksgiving Day lunch because they...

By FRANK LITTLER B EFORE over 15,000 people the cup came home âand not a 'decade too soon. The last time WC housed it, it was the 'Prince of Wales who handed it over, and of...

By JOHN BETJEMAN power was essential and countryside a decorative afterthought cared for only by reactionary cranks. Royal Commissions, advisory councils and panels of...

By LESLIE ADRIAN T HERE is one form of price increasing current just now which I particularly dislike. Th is is the practice some firms adopt of keeping th e price the same...

By STRIX S PEAKING for the trades union movement the other day, Mr. Frank Cousins observed : 'It might be said, "Why do we not co-operate with the Government?" There are two...

necessary, by force.' He refers to the 'lies we told

our ally, America'; but there is not one word about the United Nations. He mentions the "'one-world" wing' of the Conservative Party, but surely the whole point is that Sir...

Letters to the Editor.

to thank you for publishing the two articles which appeared side by side in last week's issue, written by a 'Right-wing' and a â¢Left. , wing' Conservative respectively....

SIR,âJohn Betjeman complains that on a recent visit to Kingsdown, Bristol, he did not hear the dis- tinctive Of course, if Mr. Betjeman will limit his peregrinations to the...

SIR.âMy pulling of an august leg in protest against the

IVIVBE style of architectural lettering involved me in quite another argument, about which I would like to say that there is much barking up the wrong lamp-post. I believe that...

SIR,âProbably because he has become accustomed to addressing the groundlings from his journalistic eminence, Mr. Henry Fairlie, in an excursion into literary criticism, seems...

SIR,âPharos's remarks about Mr. A. F. J. Redda- way in

your issue of September 27 were ill-founded as well as ill-mannered. Among other things, Pharos described the Administrative Secretary of Cyprus as 'a man with so little...

SIR,âLeslie Adrian is perhaps not quite fully in- formed on the work done by the British Standards Institution and its Consumer Council, of which I have the honour to be a...

a good of the Liberal Party,' he criticises the party, not that is no criticism at all. Perhaps I might remind half of his article on the Conservative Party criticis- P artY is...

I IREACH OF TRUST Sik.âIt is not my intention to challenge

or debate the points made in your most interesting article on CL shortcomings of commercial television in Britain. T i is principally the duty of such TV broadcast- Ina...

you offered last week to Mr. Christopher "awson, arising from my review of his Dynamics of _World History? My assumption that he was dead was based on the fact that the...

WAS it Aldous. Huxley who suggested that most travel books must have been mork: enjoyable to write than they are to read? -The same could be said of acres of abstract or...

Sta,âMr. Kingsley Amis, in his extremely provoca- tive and perceptive review of Mansfield Park, by Jane Austen, does less than justice to the novelist in concluding that she...

in submitting a quota- tion which speaks for many of us on the butter- 'maggie' question. It is from Murder Must Advertise, by Dorothy L. Sayers (1933): '... and they like a...

SIR,âSo, Mr. Ray is' npw reduced to scraping, the bottom

of his barrel and indulges in some mud- slinging. I shall not endeavour to compete with him at this game, but will merely remark in conclusion 'Les chiens aboient . . . la cara...

Vaughan Williams TOMORROW Vaughan Williams will be eighty-five. The likelihood of his drying up seems as remote on the eve of his birthday as ever it did twenty years ago, if...

Views of a Bridge

The Bridge on the River Kwai. (Plaza.)-â¢---Woman in a Dressing Gown. (Warner.) â Tea and Sympathy. (Empire.) A GOOD, tough film of action, a credit to British film making,...

This record deserves several special bouquet s ' First, to Ted Heath for allowing us to listen to his highly accomplished musicians in such reveal - ing detail. Secondly, to...

OCTOBER 13, 1832 POSTHUMOUS HONOURS THERE has been a meeting at Edinburgh for the purpose of passing resolutions respecting a mom ,. ment to the memory of Sir Walter Scott,...

The Grand Inquisitor By J. H PLUMB T ills masterpiece* was first published nearly thirty years ago. It is difficult to think of any work of scholarship that has lasted so well....

SOME AUTUMN REPRINTS The Outsider, by Albert Camus (Hamish Hama'

A History of the English-Speaking Peoples. Vol. III: The Age of Revolution. By Winston S. Churchill. (Cassell, 30s.) FROM William of Orange to Wellington : what more suitable...

Why ant not a Christian. By Bertrand Russell. (George Allen and Unwin, 16s.) IN 1954 Bertrand Russell said that 'throughout the West there is a very general revival of religion....

Air Dates. By Air Commodore L. G. S. Paine, CBE, MC. (Heinemann, 42s.) 13attle of Britain has succeeded Trafalgar and Waterloo as Our favourite battle. Like them it is easily...

T. S. Eliot: On Poetry and Poets. (Faber, 21s.) - MR. ELIOT is not an angry man. As the years go by, he becomes more urbane and pleasanter to listen to, intruding fewer of those...

- AMERICAN culture is more accessible to us now than ever before. In everything from the crudest folk jazz to Tennessee Williams people here are now almost as much, a }tome as...

The Twain Shall Meet. By Christopher Rand. (Gollancz, 16s.) IN limpid, unmysterious prose, like that of a goo d Oxford philosopher, the Far Eastern correspon - dent of the New...

The Letters of Lady Palmerston. Edited ' by Tresham Lever. (John Murray, 28s.) WITH some assistance from the Prince Regent and others, the first Lord Melbourne produced one of...

THE expression 'comparative government' hl settled itself like a blight upon the academic stuc of politics. Professors have written huge bool with this expression as their...

I CAN see the headline in Arts et Spectacles nom 'Patrick Anderson : Existe-t-il?' Surely it improbable that someone himself so improbab should be at large in England. Even Mr....

No Earthly Command. By Arthur Calder- Marshall. (Hart-Davis, 21s.) Two years ago, we are told, the author had a telephone message from his publisher's office about a film scout...

By IAN NIALL FLoon water and near-drought don't follow one another quite as closely as the rain cloud seems to follow the sun these days but, in my part of the world, where...

A BLURB which starts off, 'Like Herodotus, who travelled on the northern coast of Africa over 2,000 years ago, Mr. Carrington is an excellent observer and a man of insatiable...

The Languages of Love. By Christine Brooke- Rose. (Seeker and Warburg, 15s.) CHRISI INE BROOKE-ROSE'S first novel, The Lan- guages of Love, has a smart, 'contemporary,'...

Is there anything more wild than the first litter born to a farmyard cat? They scamper for shelter at the slightest alarm, and glare from cover with the jungle light in their...

'You never seen 'nobody workin one o' them circular saws regular that 'ad all 'is fingers, not if 'e really knew 'is job, like, Ole Fred was an expert, you might say. 'E'd cut...

Gleaning was going out of fashion when I was a small boy. In any case, since ours was an oat crop, the small amount of straw and grain that could be picked from a field was only...

â¢ Set by Blossom 'I do not think that you did right. Would it not have been better to have told your employer and fiancÃ© that the package only contained a cookery book, or...

SPECTATOR COMPETITION No. 397 Report by J. A. R. Pimlott The usual prize of six guineas was offered for a snapshot in verse, not exceeding four lines, taken on Q sununer...

THE FUTURE OF THE FOUND STERLING

By NICHOLAS DAVENPORT HAVING imbibed the , outmoded quantity theory of money Mr. Peter :EL (Samson) Thorneycroft now appears to have swallowedâjudging from his free-trade...

By CUSTOS A DISMAL week in Throgmorton Street started with a black oil Mon- day. Following the slump in SHELL on the huge financing programme itili PETROLEUM upset the market...