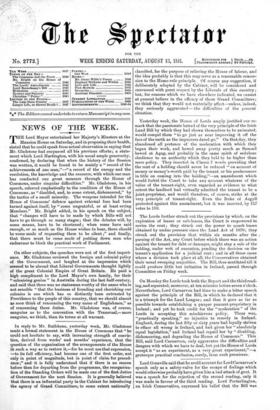 T HE Lord Mayor entertained her Majesty's Minsters at the Mansion House on Saturday, and in proposing their health, stated that he could speak from actual observation in saying...

On other subjects, the speeches were not of the first

import- ance. Mr. Gladstone reviewed the foreign and colonial policy of the Government, and laughed at the impression which seemed to be abroad that Liberal Governments thought...

Lord Granville said that be could account for Lord Carnarvon's

speech only as a safety-valve for the escape of feelings which would otherwise probably have given him a bad attack of gout. It was a speech for the rejection of the second...

The Lords further struck out the provisions by which, on

the expiration of leases or sub-leases, the Court is empowered to revise the rent ; they struck out the power to quash leases obtained by undue pressure since th Land Act of...

In reply to Mr. Rathbone, yesterday week, Mr. Gladstone made

a formal statement in the House of Commons that "he could not hesitate to say, with increasing strength of convic- tion, derived from weeks' and months' experience, that the...

On Monday the Lords took both the Report and the

third read- ing, and separated, moreover, at ten minutes before seven o'clock. Nevertheless, Lord Carnarvon had time to make a bitter speech against the principle of the Bill,...

Yesterday week, the House of Lords amply justified our re-

mark that the passionate hatred of the very principle of the Irish Land Bill by which they had shown themselves to be animated, would compel them "to go just as near improving...

The Electorate of France is in full ferment, as all

the elec- tions will be taken to-morrow week. Amongst the most note- worthy of the symptoms is this Democratic rescript addressed to M. Cl6mencean, who so nearly beat the...

Mr. Mundella made his second Education statement on Mon- day

night, and a very able one it was. It showed not only steady progress in the extension of education to the children of the people, but for the first time since 1872, an...

Mr. Bradlaugh was, as we anticipated, refused the summons against

Inspector Denning for which he applied at the West- minster Police Court. This happened on Friday week. On Saturday, Mr. Bradlaugh addressed a large meeting at Northampton,...

M. Ferry on Wednesday made a speech at Nancy, in

which, in deference to M. Gambetta, he gave up the epigrammatic watchword which he suggested at Epinal, "Ni r6vision, ni division ;" arid admitted that very moderate Republicans...

In relation to the revision which he proposes to make

in the Code, but not as yet to lay on the table of the House for its assent, Mr. Mundella said that the average attendance in each school is to be made the basis of the grant to...

The House of Commons has considered the Lords' Amend- ments,

and rejected all the more important of them by immense majorities. On Thursday night, even Mr. Goschen, we are happy to say, came back to his old position as a cordial ally of...

So far as we understand. Lord Beauchamp's "Discharge of Contumacious

Prisoners' Bill," as he now prefers to call it, we think it one, as we have elsewhere explained, for the advantage of a particular man, and for the disadvantage of the Church....

The Porte is for once scrupulously fulfilling its engagements in

relation to the Convention with Greece. It is not only evacuat- ing the territory ceded with commendable punctuality, but withdrawing from Thessaly troops which it might still...

Canon Liddon preached a fine sermon before the Medical Congress

at St. Paul's last Sunday afternoon, in which he .suggested at least, if he did not inculcate, the limits which ethics should impose on scientific inquiry into the secrets of...

The accounts received from Afghanistan seem to show that Ayoub

is not following up his victory, and has either relapsed into indolence, or is embarrassed by a deficiency of arms. Abdur Rahman's force at Khelat-i-Ghilzai is in a condition,...

On the discussion on the subject of Mr. Bmdlaugh's position

raised in the House of Commons by Mr. Labouchere, the Speaker decided that the order not to admit him into the House, except under an engagement notto disturb the House by...

The most generally interesting of the discussions in the Medical

Congress appears to have been that held on Friday and Saturday, on the origin and action of minute organisms found within animal cells and tissues. Of course, the dis- cussion...

Mr. John Dillon, M.P., was released from Kilmainham Gaol on

Saturday last, without any conditions ; but it was on the ground that his imprisonment was gravely affecting his health, —an impression confirmed by independent medical...

MR. BRIGHT ON THE HOUSE OF COMMONS.

A T the Mansion-House Banquet on Saturday, Mr. Bright, in supporting the suggestion that the House of Com- mons' machinery is thoroughly out of repair, and cannot be got into...

THE COMMONS AND THE LORDS. T HE controversy between the leaders in the Commons on Thursday night as to the proper mode of dealing with the Lords' Amendments was very hot ; and...

A S might have been expected, the Government has shown no disposition to allow the maiming of the Land Bill at the hands of the Peers. Any such yielding would, indeed, probably...

W .N., have the heartiest wish to see Mr. Green released from prison. This seemingly superfluous statement is rendered necessary, by the circumstance that the Bill for getting...

T HE stars in their courses seem to be fighting against British Jingoism. We all remember its jubilant boast-. jugs and confident predictions down to the catastrophe of the...

I N his "Life and Death of Sir Matthew Hale, Kt.," Gilbert Burnett says that that celebrated Judge had " great skill in Physick, Anatomy, and Chyrurgery." From the bench "he...

E VERYBODY who has carefully considered Christ's teaching at all, must have noticed the remarkable emphasis given in certain passages,—and these sometimes the passages where we...

THE LATE DEAN STANLEY. [TO THE EDITOR OF THE " SPECTATOR:1 SIR,—I do not know whether you will care for another story about the Dean. It may serve to comfort others, as it did...

THZ EDITOR 07 THE " SPECTATOR:1 SIR,—As I think that not only is gratitude due to sanitary science for its successful efforts to prolong human life, but that the intellectual...

MR. OSCAR WILDE'S POEMS.* THE reading of this book fills us with alarm. It is evidently the work of a clever man, as well as of an educated man, but it is not only a book...

OUT WEST. UNDER the forest, of its snows unladen, And kissing back the nervous kiss of Spring, I sit and dream of courtly knight and maiden, And old-world pomp encompassing a...

ENGLAND, WITHOUT AND WITHIN.*

IT is something to be able to say concerning any book on the United States written by an Englishman, or any book on England written by a Yankee, that it exhibits unfailing...

THE story of the maiden whom the love of Eros made immortal is one of the best-known minor legends in Greek mythology. It sets before us, in a shadowy way s the world-old...

THIS curious little book comes into the world without the name of the author, and with a title of its own ghastly enough to pre- judice the reader of ordinary nerves against it....

Tars little book is one of those which it is not easy to review with much liveliness of interest for the reviewer, or of precise instruction for the reader, because of their...

Jr has been noted as a deplorable fact, that Germany's literature has not kept pace with her political aggrandisement. In the department of belles lettres especially, no new men...

SCHOOL BOOKS. The Pesti of Ovid. Edited with Notes and Indices by G. H. Hallam, M.A. (Macmillan.)—This is a thoroughly well-done piece of work. The text has been renumbered,...

Young Ccelebs. By Percy Fitzgerald. (Tinsley Brothers.)—This purports to be

a continuous narrative, but is, in fact, rather a series of different stories strung together. The connecting link is the nar- rator, a young man who is the hero of almost all...

The Portfolio. August. (Seeleys.)—We might call this a "holiday number"

of the Portfolio. For those who may be meditating a visit to the Continent, there is a very vigorous etching of Frankfort by Mr. Ernest George, and for home tourists an article...

A Handbook of Deer-Stalking. By Alexander Macrae. (Blackwood and Sons.)—No

book on this subject could come with a better re- commendation than that which so experienced a veteran in the art as Mr. Horatio Ross gives to the volume before us. "I am...

The Following of the Flowers ; or, Musings in My

Flower Garden. (Marcus Ward and Co.)—The "following of the flowers" means the succession of the "daughters of the year," and the book is a series of reflections and remarks...

new and extended series of Vere Foster's excellent series of Drawing Books (Blackie and Son), the water-colour sketches and instructions in which are contributed by Messrs....

MAGAZINES, Erc.—We have received the following for August :— Men

of Mark, the photographs this month being those of the Duke of Richmond, Dr. Tristram, Q.C., and Sir R. Malins.—No. 1 of East and West (Grattan, Marshall, and Co.), a new...

Of books of a technical kind, we have received :—Guide

to the Literature of Botany, by Benjamin Daydon Jackson (published for the Index Society, by Longmans) ; Organs and Organ - building, by G. A. Edwards (Bazaar Office); Auditors...

number of editions and translations, which the enthusiasm of students continually send forth. We have before us now Goethe's Faust, Part I. The German text, with English Notes,...