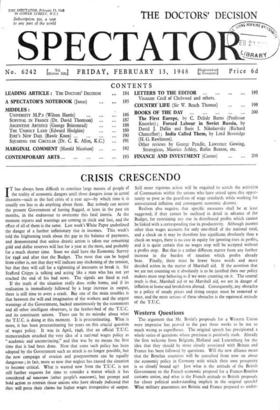 If the truth of the situation really does strike home, and if its realisation is immediately followed by a large increase in output, there is still time to avert a crash. But...

The argument that Mr. Bevin's proposals for a Western Union were imprecise has proved in the past three weeks to be not so much wrong as superfluous. The original speech has...

The days when a fall of prices in the United States was a cause for alarm and despondency have long been over. The main reaction to last week's widespread break in the markets...

On Tuesday the Duke of Gloucester read the King's Speech at the opening of the first Parliament of the Dominion of Ceylon. Thus finally Ceylon shed the last trace of its...

The new arrangements suggested by the Allied authorities for the economic administration of Western Germany have been warily received by the Germans. It was in any case unlikely...

The Government of Jerusalem

Under the partition plan for Palestine Jerusalem was to became a separate enclave. The draft statute for the city prepared by a sub-committee of the Trusteeship Council has now...

T HE first three days of this week at Westminster produced two l three-line whips on each side, which can be considered a fair , bag in any circumstances. They resulted, of...

Next June, at the Palais des Nations at Geneva, the World Health Organisation will meet for the first time as a specialised agency of the United Nations. This is the...

T HE doctors are still voting, and the House of Commons has been discussing them. The debate on Monday, which might have achieved much, achieved nothing. Gulfs which wise...

The prolixity of Members of Parliament is going a measurable

distance towards destroying the virtue of debates. The discussion on the National Health Service Bill on Monday was a particularly flagrant example of that. The subject was of...

T HOUGH the health debate in the House of Commons on Monday produced no change in the general situation, the Government could still make one concession which would go far...

I wish that Sir Stafford Cripps could have been a

little more sympathetic to the suggestion that judges' salaries should be re- considered. It is almost incredible that they should never have been revised since they were last...

mastership, gives itself that much longer to look for a successor. That, I imagine, is the chief reason for the extension, though no one would suggest that Mr. Elliott will be...

The Prime Minister has repeated the refusal of previous Govern-

ments to reopen the question of the Lane bequest. The problem is as interesting morally as almost any public issue. Sir Hugh Lane, the well-known art collector, an Irishman and...

Lord Samuel suggests that "there might be a vogue in

Ruskin as there was likely to be in Meredith and as there had been in Trollope." There might, of course, but I find parts of the sugges- tion surprising. In the case of Ruskin...

By WILSON HARRIS T HE explanatory memorandum to the Representation of the People Bill, which is to be debated in the House of Commons next Monday and Tuesday, declares tersely...

By DAVID THOMSON N OT the least regrettable feature of M. Rene Mayer's experiment with a "free market" in francs, which may well rock the pound sterling, deplete Britain's...

By GEORGE BRINSMEAD p RESIDENT PERON is a military strategist by profession. Those who watched his rise to power during and immediately atter the war are well acquainted with...

By EDWARD HODGKIN ATEST news from Palestine is entirely of violence. Large uniformed Arab bands have more than once crossed the frontiers from Syria and Transjordan to attack...

By RAWLE KNOX B Y the time the Irish have got the grating overtones of loud- speakers out of their ears and grown blind to the lingering tatters of party posters their dominant...

By Dr. C. K. ALLEN, K.C. ONE of the most moving ballads in our language tells us that "There's a famous seaside place called Blackpool That's noted for fresh air and loon."...

isy HAROLD NICOLSO ‘i TT is good news that the Government intend to relax the existing restrictions upon foreign travel. It is indeed Impossible to see bow any real progress...

IT has been a week of monsters, huge composite (and indeed synthetic) works which impose by their dimension if by nothing else. Mahkr's Eighth Symphony and Honegger's Pan of Arc...

Gallery.) The Swordsman is a Hollywood version of seventeenth-century clan warfare in the Highlands of Scotland. This little corner of Cali- fornian Cromarty comes to us in...

THEATRE All This Is Ended suffers from two defects which cannot, with due respect to the intentions and abilities of the author, be overlooked. Its conception is, however...

BRIDAL couples in their exaltation take off like rockets and float amid the stars ; lamps hang in the night sky ; fishes have fiddles and the cow jumps over the moon. In this...

to place a firm order with their newsagent or to take out a subscription. Newsagents cannot afford to take the risk of carrying stock, as unsold copies are non-return- able....

Sta,—Mahatma Gandhi may well have been an enigma to the West, because it is difficult to find anything against which to measure him. The two men I have met who have come into...

SIR,—Under the heading Managers of Learning ? in your issue of January 30th, the headmaster of Bradford Grammar School mentions that "a general, an admiral and a politician"...

REFORM OF THE LORDS Stit,—Both you and your correspondents are agreed that a Second Chamber is desirable. Lord Bryce's Committee set out four functions of such a body. In...

SIR,—Since in the Representation of the People Bill the Government is definitely determined to introduce the flat rule of one man one vote, is it not rather surprising they have...

Sra,—You rightly point out that there is no adequate reason for not admitting the United Nations Palestine Commission to Palestine at once, as the Commission could not possibly...

Sta,—You have published revealing reactions of the medical profession to the new Health Service. Will you now print a patient's point of view? Under the service scheme as it...

Sta,—I am afraid Mr. E. L. Black's investigation of whose share of the national wealth (he means income) has risen most since 1939 is not a thorough one, commonplaces of...

Plenty of evidence has reached me of the increasing number of quail seen in England during 1947; and I must believe that a good part of the credit belongs to the International...

SIR, —Readers concerned for the relief of Germany's plight in the third winter after the war may like to know that at the moment Friends Relief Service is able to buy, mainly...

Stn,—One must with Janus doubt the wisdom of your Ministry's advice to avoid surplus by "drawing less milk from the cow." In like circumstances with our much-goats in this...

ARE there any windmills in regular use in England ? The question is suggested by the news that recent scientific research advocates the revival of wind-power for various uses....

sta,—I want to call attention to a statement in At Westminster in your issue of January 30th. It infers that the allowance to the Duke and Duchess of -Edinburgh will fall on the...

Commons Oak The accounts of English craftsmen, some in their

old age, at work on English oak for the ceilings of the new House of Commons, should help to'restore pride both in our crafts and in our timber. Some of the oak comes from...

Sta,—One wonders what peculiar Denkmethode led Mr. Nicolson to ascribe the authorship of The Apology of Socrates to Aristotle. Was he "in a mood of ecstasy" when he did so? Or...

In a cubic yard of garden, so to say, were flowering freely -in the first week of February Cydonia Japonica and Viburnum Fragrans with a carpet of lungwort, mixed up with...

The Labour Camps of Russia

Forced Labour in Soviet Russia. By David J. Dallin and Boris I. Nikolaevsky. (Hollis and Carter. 25s.) "THE terrible truth is that out of Russia's rich historical past the...

The Dark Ages The First Europe. By C. Delisle Burns. (Allen and Unwin. 25s.) IT is one of time's revenges that the Dark Ages, so long shunned by historians and readers as...

BEFORE Bolivar had won a battle against the Spaniards he had a,ccurately foretold the shape and characteristics of the nations that he was about to create. Before he had...

India Called Them. By Lord Beveridge. (Allen and Unwin. 18s.) THE life story of Henry and Annette Beveridge, so movingly told by their son, is typical of the vanished...

Portrait of a Great General

Juan Grin: His Life and Work. By Daniel Henry Kahnweiler. Trans- lated by Douglas Cooper. (Lund Humphries. 52s. 6d.) THERE is a contrast between the writings of painters and...

Natural History in the Highlands and Islands. By F. Fraser Darling. (Collins. 16s.) And Clouds Flying. By Ian Pitman, with Illustrations by Peter Scott. (Faber and Faber. 15s.)...

A HISTORY of Portugal in English was wanted. Apart from the book by Morse Stephens, now over fifty years old, and Sir George Young's amusing but eccentric volume (understandably...

THE SPECTATOR" CROSSWORD No. 464

[A Book Token for one guinea will be awarded to the sender of the first correct solution of this week's crossword to be opened after noon on Tuesday week February 24:11....

NEW dramatic work by the author of Will Shakespeare is an event in the theatre—or should be. All the omens for this play were good. A distinguished cast was well produced in a...

Politics in Pitcairn. By W. K. Hancock. (Macmillan. 10s. 6d.) THE ten essays in this collection all bear out Professor Hancock's own statement, in the preface, that he is "more...

By CUSTOS FOR a long time past the level of stock market values has been so largely notional that the successful market forecaster needs to be as much a psychologist as a pure...