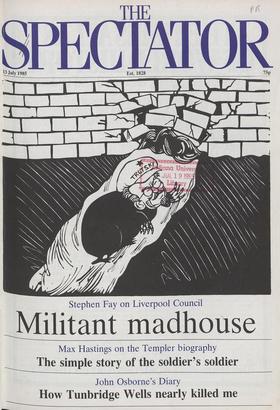 D r Richard Livsey won the Brecon and Radnor by-election for the Liberals, beating the Labour candidate by 559 votes, and the Conservative by 3,000. Mr Kin- flock appeared to...

SPEAKING at the launch of a church restoration appeal, the Archbishop of Can- terbury recently remarked how 'we attach too little importance today to the signifi- cance of...

PRESIDENT Reagan does not make things easy for his friends. After the latest bout of world terrorism many of us would agree that measures should be taken against states which...

SCARGILL: THE FRUITS OF FAILURE B y . leading the miners' strike, Mr Arthur Scargill achieved several remark- able results. He kept those who followed him out of work and...

Mr Lawson re-presents his middling achievements CHARLES MOORE I you like a piece of music or a song, it is irritating to find it adopted or adapted for a television...

I never thought I would live to miss Binkie. 'Who?' readers may ask. Hugh 'Binkie' Beaumont, General Manager of H.M. Tennent, was the Scargill of the iron-lilac Stage...

Report from behind the front line in the class war AUBERON WAUGH F ive or six summers ago I spent an entire night lying on my back beneath a cloudless sky in the Languedoc,...

MILITANT VERSUS THE PEOPLE

Stephen Fay on how Trotskyite-inspired policies of Liverpool City Council stopped a co-operative housing scheme THERE ARE still jobs for the boys in Liverpool, despite an...

JASMINE AND THE SOCIAL WORKERS

Roy Kerridge continues his account of how a child under council care died after horrible injuries ON THE second day of my appearance at the inquiry into the death of Jasmine...

The London School Board on Thurs- day passed by a vote of nineteen to eighteen a momentous resolution. They resolved, on the motion of Mr Hoare, to 'petition Parliament to make...

Richard West finds the novelist's home village split over his reputation THE break-away of Nottinghamshire from the National Union of Mineworkers came just in time to mark the...

Andrew Gimson asks how the Tories can stop their supporters from going the way of the Duke THE Liberal candidate won Brecon and Radnor by the straightforward expedient of...

The press: Paul Johnson on academic and sporting prodigies THE PRESS loves a prodigy, especially a child prodigy. Ruth Lawrence is prodigious by any standards. She got a...

THE City of London is British Telecom's best market. It is not, though, the best place to buy a telephone. Mine is giving way under the maltreatment of years, and I cranked up...

A BUBBLE marked 'Expletive deleted' hung from the mouth of Sir Peter Green, chairman of Lloyd's, as he left the High Court. Ian Posgate had won the first of his battles against...

GOTTERDAMMERUNG effects were laid on when the libertarian sage Friedrich Hayek set out to enlist British bankers in his plan for the denationalisation of money. The sky over...

THE bid document from The Exploration Company of Louisiana invites holders of L. Texas Petroleum to accept shares of inde- terminate value, with no cash alternative, issued by a...

Money is blown off course, and sterling catches the breeze CHRISTOPHER FILDES M arkets always tell a story, and we must not complain when the story is comical. So now with...

Sir: Mr Kavanagh (Postscript, 6 July) professes not to have read anywhere of the past damage caused by the Stonehenge pop festival, which led to the injunctions being served...

Sir: While agreeing with most of what my friend Rebecca Asrate Kassa wrote on Ethiopia (Letters, 6 July), I think she is not entirely right about Lij Iyassu, who in- cidentally...

Sir: Gavin Stamp in his review of Richard Dorment's book Alfred Gilbert (15 June), refers to Isabel McAllister's earlier biogra- phy as being necessarily partial and goes on to...

Sir: When President Reagan said that the streets of Heaven are guarded by the United States Marines, he was not, as Christopher Hitchens would have it ('Hel- lish week for...

Sir Keith tries to put scholarship in the supermarket COLIN WELCH I do not have to persuade Spectator readers except, as I sadly suggested last week, Sir Keith Joseph, of the...

After thirteen years nothing is changed except the years like birds have printed my face with their feet, and my side of the bed is hollow. I've tunnelled a path from myself to...

Whining and complaining in the Siberian wind

Rupert Christiansen A LITERARY HISTORY OF CAMBRIDGE by Graham Chainey The Pevensey Press, £14.95 T his is a book that any self-respecting reviewer, especially one educated in...

(supposed to be spoken by Seamus Heaney) I was hoping the next ghost to shake hands would equal in fame my previous advisers. Yeats? Swift? No, they were Protestants. Imagine...

Richard Tapper NOMADS AND THE OUTSIDE WORLD by A.M.Khazanov Cambridge University Press, £37.50 e do not take kindly to those who W transgress what we have defined as the...

Sex and religion among the Savages

Francis King BLACK ROBE by Brian Moore Jonathan Cape, .£8.95 W hether in the abrasive satire of his The Emperor of Ice-cream, the exuberant fantasy of The Great Victorian...

Painting and politics George Walden L istening to Professor George Steiner's elevated thoughts on Marxism and art history at the Courtauld Institute recently inspired me to...

Going down like a bomb Peter Ackroyd S ince it opens in West Germany, and combines a suspicious suitcase with a markedly Teutonic blonde, the scenario is at once clear to...

Piano pieces Peter Phillips T he last few weeks have yielded an impressive batch of records for solo piano. The bulk of their repertoire is not new, but the interpreters are...

Grace under pressure Taki But grief is a private thing, and I don't mean to use her death to wax on lyricallY about the meaning of it all. She always laughed about my...

Trading insults Alice Thomas Ellis I find people who express themselves as insulted rather more tiresome than those who insult people. Rudeness is annoying but offended...

Same old scripts Jeffrey Bernard W e were strolling towards Soho just before opening time yesterday and She suddenly said, 'Isn't it a lovely day.' I made the nonsensical but...

Formalities and societies P. J. Kavanagh W alking under the stands at Lord's before the start of the day's play in the Test match, I marvelled at the order and clarity of it...

Jaspistos reports: Competitors were asked for a imaginary exchange of letters be- tween the mayors of London and Managua on the news that the two cities are to be 'twinned'. It...

No. 1380: GBS v GKC Set by Jaspistos: In 1923 Hesketh Pearson, in the Adelphi magazine, reported an entirely imaginary conversation which he claimed to have overheard between...

Timman triumphs David Goodman T he four qualifiers into the Candidates' tournament from the 2nd Interzonal held at Taxco, Mexico, from 8 June to 1 July are Jan Timman of...

THERE are times when you want to go to a

restaurant simply because the alterna- tives are just too depressing. Even if you like cooking, there's something so desper- ately wearying in knowing that the eating part is...

Our apologies for a misprint in Jennifer Paterson's Food column