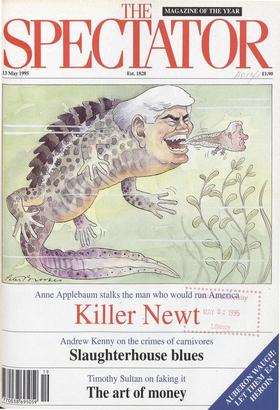 M r John Major, the Prime Minister, made a mysterious remark in the wake of the disastrous Conservative Party perfor- mance in the local elections: 'We will do precisely what...

We don't want to leave the party yet; we just want to know where the door is BORIS JOHNSON H er Majesty's Government winced. 'No, no,' he said, slugging his champagne. 'I...

T here can be no one so smug as the writer who has just finished a book â par- ticularly if he has friends who are only in the middle of theirs, or, better (meaning worse),...

Perhaps we should be grateful for the cowardice factor in politics AUBERON WAUGH T he best joke about the local elections was made by Frank Peters in a letter which appeared...

HE ONLY WANTS TO RENEW AMERICAN CIVILISATION

Anne Applebaum spends a week following Newt Gingrich around, and discovers that America might be in for a bigger shock than it had bargained for Washington IT IS EARLY on a...

Wilt of the Week

WHY MURDER IS WRONG

Andrew Kenny argues that we should all be forced to witness the slaughter of animals and the abortion of tiny babies Cape Town I HAVE personally witnessed the last ter- rible...

persist.. . EVERY TIME I enter the prison of late I wonder, the feeling of doom upon me, how I myself should survive a prison sen- tence. I think on the whole that it would not...

IN BOGGS WE TRUST?

Timothy Sultan joins the American Secret Service in the attempt to unravel the activities of a man who turns money into art New York EIGHT YEARS have passed since J.S.G. Boggs...

`MUMMY, I wish I wasn't called Veronica,' said Veronica out of the blue. Noting her use of 'wasn't', I replied, `Don't be silly, 0 praenomen of my cog- nomen. We can't all...

Leo McKinstry interviews the Chief Inspector of Schools, a man who has become the scourge of his former colleagues THE CRISIS in state education continues. However, it is a...

Despite Virginia Bottomley's promises, the NHS has still not eliminated mixed-sex hospital wards, discovers Joanna Pitman A COUPLE of weeks ago a Tory MP who sits on the Health...

THE DEATHS of Lord Pembroke and Lord Selborne raise very interesting and curious points in connection with the question of what vacates a seat in the House of Commons, for the...

The sanctity of human life is everywhere undermined. It's time to bring back the death penalty PAUL JOHNSON C harles Moore drew our attention, in an article The Spectator...

Kenneth Clarke's policy comes up against the limit of what his people will stand CHRISTOPHER FILDES R obust, genial and combative, the Chancellor of the Exchequer was more...

Sir: Like Lord Bethell I was also present, together with several hundred other visitors from the United Kingdom, at Gallipoli on 25 April (`The great Australian lie', 6 May). In...

Sir: You were kind enough to publish a let- ter from me in your edition of 25 March in which I referred to your columnist Mr Theodoracopulos. Your readers may be surprised to...

Sir: If to have refused to serve under Orde Wingate is a qualification, J.A.R. Milman is excellently qualified to write long and wild letters about him to you (Letters, 6 May)....

Sir: When Anne Applebaum published her interesting article in your issue of 8 April ('What did you do in the Occupation, Daddy?'), memories came flooding back of my experiences...

Sir: You do not appear to have published any letters congratulating you on the intro- duction of a bridge column. I cannot believe that you have not received any. I do remember...

Sir: Simon Jenkins (Centre point, 29 April) is not exaggerating about the institutions' pragmatic response to the imposition of meaningless 'indicators'. A friend, applying to...

Sir: Your deputy editor wrote that no one was examining

the lives of newspaper own- ers ('Why I said no to Mary Ellen Synon', 15 March). Well, I am writing a biography of Mr Rupert Murdoch, and I should be grateful to hear from any...

Sir: Recent issues of your great magazine have made mention of foxes. Shortly after the war, I was staying at a country property in the outback in New South Wales, where foxes...

Sir: As Isaiah Berlin's editor (Henry Hardy) and biographer (Michael Ignatieff), we would be grateful to see (copies of) any letters from him that individual correspon- dents or...

Shame on you, Julie

Sir: Julie Burchill's incoherent account (Books, 8 April) of Angs Nin is an inade- quate substitute for a detached review of Deirdre Blair's biography of Nin. To sug- gest that...

The time was out of joints John Mortimer HIPPIE HIPPIE SHAKE: THE DREAMS, THE TRIPS, THE TRIALS, THE LOVE-INS, . THE SCREW-UPS: THE SIXTIES by Richard Neville Bloomsbury,...

Depression moving in from the West

Taboo or not taboo

Anita Brookner INTIMACY by Julian Rathbone Gollancz, Â£15.99 ,pp. 254 I t may be â or so the author of this com- plicated and resonant novel seems to be saying â that...

The riddle of Arenas

One woman at one time plays many parts

Anne Chisholm SPLITTING by Fay Weldon . HarperCollins, Â£14.99, pp. 265 F ay Weldon's novels, including this one, are not as weird as they at first appear. For some time now...

An aristocrat of the Left

Waiting for another masterpiece

Byron Rogers THE END OF THE HUNT by Thomas Flanagan Sinclair-Stevenson, Â£14.99, pp. 627 I have waited a long time for this. In 1979 Thomas Flanagan, a middle-aged American...

Raymond Carr THE DE-MORALIZATION OF SOCIETY by Gertrude Himmelfarb lEA, Â£12.50, pp. 314 T his is a tract for our times written by a distinguished historian with a rare gift...

Never mind the width, feel the lack of quality

Michael Bywater THE FABER BOOK OF POP edited by Hanif Kureishi and Jon Savage Faber, i16.99, pp. 813 T hose who can't, no longer teach, but go into journalism, where the great...

A long look at nothing much

Architecture Phoenix on the Downs Laurence Marks admires the impressive recreation of Uppark after the great fire mittee of the National Trust met at St Anne's Gate to decide...

All music, no words Geoffrey Wheatcroft talks to Sir Harrison Birtwistle about The Second Mrs Kong A ccording to received opinion, 'Eng- land is the Land ohne Musik', Glynde-...

Fulfilling every desire Robin Holloway A hundred and fifty years ago â May 12 1845 â Gabriel Faure, the supreme composer of felicity, was born. Gentle, pol- ished,...

Skylight (National/Cottesloe) The Plough and the Stars (Barbican) Hare's breadth Sheridan Morley T he widely held view of David Hare, for my money unquestionably our greatest...

Bullets over Broadway ('15', selected cinemas) His private life is his own affair Mark Steyn I f you want, you can find autobiographical echoes in almost anything of Woody...

Hooked up to the sky Nigella Lawson hat I wish I were really reviewing this week is radio. It's not just the whole VE day bit that Radio Four has been doing so well: it's all...

Time to grow up Taki H andel's Water Music was composed for a grand ceremonial occasion, yet it would have suited me perfectly last Satur- day night in the Big Bagel at...

Only one thing on my mind Jeffrey Bernard L ike most people who are old enough to have taken part in the last war or to have observed the Blitz from the comparative safety of...

The perfect drift Nigel Nicolson S ome years ago I travelled the entire length of the Thames from source to mouth, first by canoe as far as Oxford, next by cabin-cruiser to...

Sick or just skiving off? Holly Budd W e were stricken again by sickness this week, a throaty cold rampant. There was widespread loss of voice and in the cor- ridors an almost...

GETTING TIRED of the even more tired northern waters white fish that fill so many local English fishmongers' slabs? I have found a source of fresh Gulf of Mexico fish, huge...

Fit to play Andrew Robson BRIDGE TEXTBOOKS advise that a combined holding of eight cards is neces- sary to make that suit trumps. Alphonse Moyse of the United States made the...

First come, first served Auberon Waugh A n enviable characteristic of this offer is the amount which Lay & Wheeler have been prepared to knock off their list prices to secure...

Gata melata Raymond Keene GATA KAMSKY, in spite of his setback against Anand in the PCA Qualifying Final, continues to be one of the most suc- cessful condottieri on the...

A first prize of Â£25 and a bottle of Graham's Malvedos 1979 Vintage Port for the first correct solution opened on 30 May, with two runners-up prizes of Â£15 (or, for UK...

Dear Mary. . May I suggest another ingenious way to get rid of the telephone-hogger (Your prob- lems solved, 29 April)? The secret is to start saying something, and then hang...