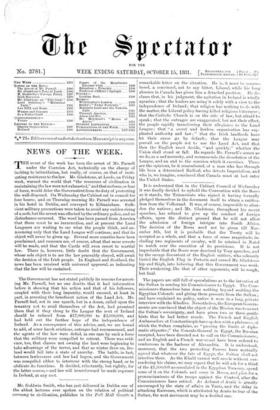 T HE event of the week has been the arrest of Mr. Parnell under the Coercion Act, technically on the charge of inciting to intimidation, but really, of course, on that of insti-...

It is understood that in the Cabinet Council of Wednesday

it was finally decided to uphold the Convention with the Boers as it stands, the Triumvirate who signed it having formally p ledged themselves in the document itself to obtain a...

The Government has not stated publicly its reasons for arrest-

ing Mr. Parnell, but no one doubts that it had information before it showing that his action and that of his followers, -coupled with their long impunity, would succeed, at...

IV The Editors cannot undertake to return 3fanuscript in any

The papers are still full of speculations as to the

intention of the Sultan in sending his Commissioners to Egypt. The Com- missioners themselves have done nothing beyond scolding the Egyptian Colonels and giving them presents...

Mr. Goldwin Smith, who has just delivered in Dublin one

of the ablest lectures ever spoken on the relation of political economy to civilisation, publishes in the Pall Mall Gazette a remarkable letter on the situation. He is, it must...

It is affirmed that M. Gambetta, on Thursday, held a

conver- sation of two hours with M. Grevy, and that the latter finally summoned him to power. M. Gambetta accepted, stipulating that he should choose his own Cabinet; but...

The journals both of France and Germany are much pre-

occupied with M. Gambetta. It is (*stain that that statesman disappeared from Paris for some days, and that he visited Germany, and it is asserted that he went to stay with...

The journals this week have been loaded down with speeches.

Mr. Gladstone delivered two at Leeds on Friday se'nnight, and two. more on Saturday, and a fifth and sixth on Thursday at the Guildhall, all of the first class, as full of...

Lord Salisbury delivered his first speech at Newcastle on Tuesday,

pouring oat the assertions -noted elsewhere—asser- tions markesIthroughaut by the Ad Beaeonsfieldian contempt for facts—but on Wednesday, atter another string of statements, he...

The French have taken another great step towards the- annexation

of Tanis. The Generals represented that it was impossible to leave that city ungarrisoned while they marched into the interior, as it was full of disaffected Arabs, who might,...

That concurrence of circumstance with policy which we call good-luck

begins to attend this Government. Ayoub Khan, the Afghan Pretender, has at length been totally defeated, has lost Herat, and has fled for refuge into Persia. A. telegram from...

We have said enough of Mr. Gladstone's speeches in Leeds

elsewhere, and have only here to notice that in the Guildhall he took occasion to repeat strongly that one of the first necessities of politics was to restore to Parliament its...

The sudden death of Baron Haymerle, the Austrian Minister of

Foreign Affairs, removes a conspicuous personage from European politics, but will not gravely affect their course. It is notorious that the Emperor Francis Joseph manages his...

The Paris correapandent of the Times affirms positively that Leo

XIII. has sounded the Governments of Europe upon the -subject of quitting Rome, and has ordered arrangements to be made in the Vatican by which he could depart within twelve...

Sir William Harcourt has directed the Magistrates to prohibit the

processions of the Salvation Army in towns. In a letter to the Stamford Magistrates, the Home Secretary admits that the processions are legal, but directs that they be stopped,...

Professor Clifford's friends inform us that the epitaph on his

We have repeatedly stated our belief that the French army

in Tunis is suffering extremely from sickness, and the Medical Weekly of Marseilles now confirms that statement. The doctors write from the spot to that journal affirming that...

By the death of Dr. Leighton, the Warden of All

Souls', which took place on Thursday, another of the Oxford Head- ships becomes vacant. This in one of the few posts of the kind which is not confined to clerics and past or...

The Government of Russia learns little from experience. It has

just issued a manifesto on the subject of the outrages against Jews, which is practically a justification for them. The Minister of the Interior, General Ignatieff, in a...

T HE note which rang through Mr. Gladstone's speeches at Leeds—speeches which revealed him as still in the highest vigour of his powers, and with, we think, a new ability to...

THE ARREST OF HR. PARNELL. T HE long-enduring patience of the British Government and people has been worn out, at last. We have ourselves no sympathy with the storm of...

T HE odd story which has been amusing all the capitals of Europe this week—the story of M. Gambetta's visit to Varzin—has a significance of its own which is not wholly pleasant....

W E are not of those who believe, with Lord Derby, that Ireland, as a whole, strongly desires her independence: She desires, as her whole history shows, several other things...

M R. GLADSTONE has rarely shown his easy mastery of figures to greater advantage than in those passages of his Leeds speeches in which he sifted the evidence for the alleged...

L ORD SALISBURY complained, in his speech at New- castle on Wednesday night, that Mr. Gladstone and his colleagues show "an imperfect appreciation of the historical facts of...

W do not attach any importance to the rumour, to which the Times gives such prominence, that many Italians are anxious to remove the capital of Italy once more from Rome. All...

M ISS COBBE, in her valuable little volume on the "Duties of Women" (reviewed in these columns when it first appeared) touches on a part of duty which seems to us inadequately...

S CENE,—a small room of mean aspect, divided by wooden rails and balustrades into several compartments ; two desks at one end, the one higher than the other, and a table placed...

YVOIRE. [Mum A CORRESPONDENT.] THERE 19 probably no place on the Lake of Geneva less known - and better worth visiting than Yvoire. Although now little- more than a lacustrine...

CHARITY ORG.INISATION. [To THE EDITOR OF THE " SPECTATOIL * 1 Sta,—Permit me to express the sincere gratification your article on the Organisation of' Charity, in last week's...

[To THE EDITOR OF THE "SPECTATOR?'] SIR,—In the Spectator of the week ending October 1st, I find a notice of my translation of "Holland," by Signor E. de Amicis. May I be...

LOOKING BACK. FAIR were the dreamful days of old, When, in the sleepy summer shade, Beneath the beeches on the wold, The shepherds lay, and gently played Music to maidens, who,...

[TO THE EDITOR OF THE "SPECTATOR."] SIR,—When the Book of Common Prayer was accepted for use by the great bulk of the English Clergy early in the reign of Edward VI., and again...

[To THE EDITOR OF THE "SPECTATOR."] SIR,—In the Anthologia Graeca will be found an epitaph (Jacobs, Appendix, No. 280) which may possibly have suggested, the opening words, at...

PAPERS OF THE MANCHESTER LITERARY CLUB.

[To THE EDITOR OF THE "SPECTATOR.") SIR,—In your last week's article on the "Papers of the Man- chester Literary Club," there seems a slight error, which, though possibly...

WHITTINGTON'S LONDON.* THIS entertaining and instructive little book, which belongs to the capital series of biographies entitled "The New Plutarch," bears on its title-page...

THE great figure of Mr. Burke's second volume is Archbishop Cranmer,—a fixed figure for the author's scorn to point his slow, unmoving finger at. For the discussion of the...

MATABELE LAND AND THE VICTORIA FALLS.* IN many respects this

is a disappointing book. The writer of these letters and journals was a man full of enterprise and ambition, a sportsman as well as a naturalist, with that keen love of...

MR. MARSHALL'S book is almost enough to sap the patriotic constancy of that renowned person who, in spite of all tempta- tion to belong to other nations, remained an Englishman....

"FIND a man," says Carlyle, "whose words paint you a like- ness, you have found a man worth something. He could not have discerned the object at all, or seen the vital type of...

MR. MORSHEAD'S "HOUSE OF ATREUS."* MR. MORSRELD, whose translation of

the Agamemnon, published some little time ago, attracted much favourable notice, now sends forth a complete version of the Trilogy. In some respects, both the Choephoroi and the...

Curiosities of Criticism. By Henry J. Jennings. (Chatto and Windus.)—Mr. Jennings allows that critics are necessary, an alio% - ance which might be made for mosquitoes, and...

(Sampson Low and Co.)—We cannot say that we have detected much difference between this compilation and the ordinary picture-gallery catalogue. In the space of one hundred and...

Music and Musicians : Essays and Criticisms by Robert Schumann.

book is fully up to the statement of the diffuse title we have abbrevi- ated. Considering what has been done in the study of variation among pigeons, we were surprised to find...

MAGAZINES, Exc.—We have received the following for October :-- Part

10 of Pathways of Palestine, with two permanent photographs,. illustrating the ravine of the Bedron and Elishals fountain at Jericho.—Men of Mark, the portraits given this month...

Text-books of Art Education.") (Sampson Low and Co.)— The plan of this series has been made with a clear perception of what text-books of art should attempt. Their work is...

English Plant Names, from the Tenth to the Fifteenth Century.