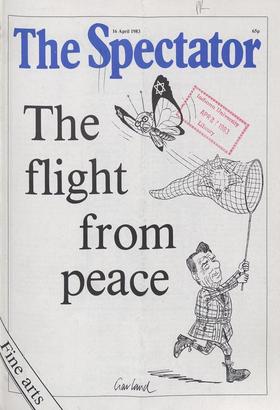 Planning for chaos Colin Welch B e my friend', Germans were supposed to say, 'or I will kill you'. This is how Labour talks to the banks and financial in- stitutions, as to...

T he Speaker of the House of Commons, Mr George Thomas, departs with the Present parliament. His successor will be a Tory on the illustrious principle of Buggin's turn. Several...

Alexander Chancellor A bout the feelings of the Palestinian Arabs actually living under Israeli rule there was practically nothing to be read in the British press this week....

Christopher Hitchens I n early March 1976, I sat in a bare office in Baghdad, contemplating my good for- tune. Across the desk from me was the lean and striking figure of Mazen...

David Pryce-Jones J ohn k Carre's thrillers have conveyed, as few others, the urgency of the struggle waged between East and West, between totalitarianism and democracy. The...

This article is also appearing in the NeW Republic. The

Little Drummer Girl i s published by Hodder and Stoughton.

John Chipman L'or much of the Fifth Republic, the French have considered the formation of foreign policy as a branch of aesthetics. De Gaulle's 'certain idea of France'...

Antonia Martin G oats in Wales used to be thought of as regimental mascots or animals pubs were named after, but they have long since become the badge of the immigrant —...

Trotsky and the Trotskyists

Walter Kendall L abour's National Executive Committee, who by and large lack the Marxist education and intellectual rigour which Herbert Morrison and an earlier generation...

There never was such a position as that of the Czar of Russia. Europe and Asia are being ransacked to increase the splendour of his coronation, the church where the ceremonial...

Liverpool: a cry for help

Eric Heffer T he horri fi c word-picture of Liverpool, painted by Richard West in Paddy's other island' (2 April), as a city occupied by a bunch of dead-beats is outrageous...

Jeremy Lewis M any schools nowadays — at least in the state sector — no longer seem to bother with school reports, those ominous documents that wicked or ingenious Children...

Sir: After reading Giles Gordon's venomous diatribe against the army in his review of Coming Home (2 April), 1 can on- ly surmise that he suffered some appalling humiliation at...

Sir: May 1 suggest some alternative wording for the full page advertisement placed in your journal by LIFE? 'TWO MILLION Women saved from having Unwanted Babies by the 1967...

Sir: The short response to Richard Osborne's letter (26 March) on whether Deutsche Grammophon should choose Brahms, Webern, Gibbons or Rameau for a centenary splash is: if they...

Sir: In connection with the Hotel Great Central referred to in Ian Waller's article (26 March), my impression is that this was never a railway hotel in the sense that the Great...

Sir: I have been commissioned by Junction Books to edit an anthology of athletic verse: The Poetry of Motion. It will hopefully represent all sports, from soccer to snooker and...

Sir: While sympathising with Jeffrey Ber- nard over his protracted hospitalisation, one may at least take vicarious pleasure in the refining influence that French music, on...

Sir: As the regular contributor who writes the only predictably

boring and uninfor- mative column in a magazine that otherwise becomes ever more sparkling, Richard In- grams may have much to be modest about. But it seems a pity he should...

Who's odd Sir: Richard Ingrams is right about Who's Who's astonishingly blinkered editorial Policy (2 April). Dim civil servants, even when long retired, get in simply because...

Sir: Congratulations to Richard West (2 April) on his incisive summation of Liver- pool's economic and social difficulties, and in particular, his fearlessness in ascribing...

Louis Heren The Eisenhower Diaries Edited by Robert H. Farrell (Norton 15.25) T he book under review reminded me of J. R. Pole's article in the Spectator recently which...

John Braine Look Out, Doctor! Dr Robert Clifford (Pelham Books £7.95) 'W hat signifies,' says someone, 'giving halfpence to common beggars? TheY only lay it out in gin and...

Frank Longford The Last Testament of Oscar Wilde Peter Ackroyd (Hamish Hamilton £7.95) T t is 50 years since I was asked to review a 'book for The Spectator. At that time I...

Gillian Avery The Golden Age and Dream Days Kenneth Grahame Illustrated by Maxfield Parrish with an introduction by Marion Lochhead (Paul Harris Publishing £8.95 each) Paths to...

Treasure trove Henry Elwell w hile the major West End galleries are saving their big exhibitions until June the sale rooms look as though they will be very busy over the next...

Flash in the pan Peter Ackroyd Best Friends (PG', selected cinemas) G iven the fact that Bert Reynolds and Goldie Hawn are not the most pre- possessing actors, Best Friends...

Verbiage Taki New York T he New York Times is a sanctimonious organ whose size, however, is perfect if one wishes to read a tabloid while simultaneously giving the impression...

Over-awed Richard Ingrams A , unusual event of its kind occurred on Sunday. At the end of an Omnibus programme devoted to singing the praises of Peter Ustinov, who has a new...

First-class minds P. J. Kavanagh I read somewhere that Mr Wedgwood Berm admires Mr Ken Livingstone but doubts whether he has 'a first-class mind'. What caught my attention was...

Saturday fever Jeffrey Bernard I t seems to me that the League Against Cruel Sports only opens its mouth to Chan ge step. One expects a load of horse manure during Grand...

Big stick Raymond Keene /There was one day during the Lucerne 1 Fide Congress when Soviet defector Victor Korchnoi looked as if the sky had fallen on his head. That morning,...

Charles Seaton reports: Competitors were asked for a letter to a friend, asking for a loan, as it might have been written bY Henry James, Laurence Sterne, James Joyce, G.K....

D espite almost universal agreement that .1-,President Reagan's Middle East peace plan had collapsed with the breakdown of negotiations between King Hussain of Jor- dan and...