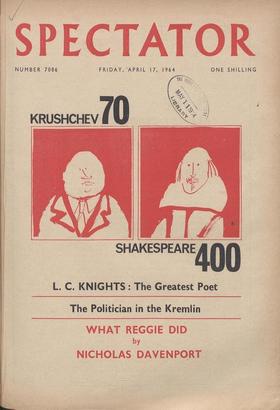 'ANY MINISTER is honestly wicked,' Sir Keith Joseph was quoted as saying by Hansard. But the Housing Minister asked the Commons' leave to alter the record to his actual words,...

T HERE is little point now in exhuming the arguments for and against a general election in June or October. The decision has been taken. It is only worth noting for the record...

, Legal Labyrinth at the UN

OUR UN CORRESPONDENT writes from New York: Last week I wrote mainly about the political aspects of Russia's, possible loss of vote at the UN over default of payments. But the...

rr LIE proposals for a United Nations blockade of South African ports can only lead to the very violence they are ostensibly designed to avoid. No one should believe that they...

Cold Comfort Farm By DAVID WATT The. wheeling cycle of the zodiac had turned and lo and behold there, in his appalling spring plumage, crowed Mr. Leo Abse, while the gleam-:...

From MURRAY KEN1PTON WASHINGTON T rrtiE women of the Republican Party assembled for conference here last week and gave us the last undiluted expression of the isolation of the...

From HARRY FRANKLIN LUSAKA rr HE problem of Southern Rhodesia will not I be easily solved. There could be a good deal of blood-letting before it is solved, but not if Dr....

Lines Written in Consolation to Mr. Michael Hydleman, chairman of the Greater London Council Liberal Campaign Committee. Others perhaps contrive to rock the boat Or split a...

A few months ago I was talking to two friends who had just returned from a walking tour in Switzerland. It was impossible not to notice, they said, that the countryside there,...

I read somewhere the other day that a certain village was to acquire an 'amenity centre.' This seemed a singularly disagreeable way of referring to a village green. In the same...

No United Kingdom representative was present when General MacArthur was buried, with pharaonic splendour, in a Napoleonic sarco- phagus, at Norfolk, Virginia. I thought the stir...

The only comment on the three famous Times articles that itself demands comment was pro- duced by the Lord Chancellor in the House of Lords. 'I find it difficult to accept,'...

THE news of Winston Field's resignation as Prime Minister has been inter- preted in the press and at Westminster in many different ways. A foolish few are openly delighted. The...

I congratulate Professor L. C. Knights on his appointment to the King Edward VII Chair of English Literature at Cambridge. There has been intense speculation, I gather, as to...

The news of Peter Sellers's illness set me thinking about the rich profusion of his talents. Then I heard the new LP record which he and his fellow-spirits Harry Secombe and...

I am sorry that the Bill to extend the right to a postal vote was 'talked out' last Friday. Mr. W. R. Rees-Davies, who introduced it, pointed out that, without such provision,...

Shakespeare, the Language and Ourselves

By L. C. KNIGHTS . . English, the rough basement. Los built the stubborn structure of the Language, acting against Albion's melancholy, who must else have been a Dumb despair....

exercise for the American historian—that and the inquiry into its working- out in practice—the future implications of the American idea are no less a concern for all those who...

No. 2 of a series about Oxfam's work at home

and abroad ■ 11 ■ a a s ee The peace of the world in our children's lifetime is likely to depend on whether the have-not nations can advance with reasonable serenity towards...

There is always more to look at than one actually

sees, and Architecture of England by Bruce Allsop and Ursula Clark (Oriel Press, 9s. 6d.) is a beautiful little guide for the home tourist, full of telling pictures, diagrams...

Personally, I preferred the more straight- forward adventure of Caravans, clearly designed, by the author of Sayotiara and South Pacific, for a super-colour film of the same...

Oxford's earlier days—even to the extent of having a whiff

of Tom Brown about it. With these reservations, Jill still remains worth-while stuff; and one not unimportant thing which makes this edition even better than the original is...

WE make our first incantations as infants: by the simple

expedient of opening our mouths and bawling we obtain from some higher and in- comprehensible agency whatever we desire— attention, warmth, food. For a long time the infantile...

For those, however, who have the full courage of their

puerility and are prepared to venture beyond Gentle Jesus to the Baron Samedi or the Great Beast, Maurice Bessy's A Pictorial History - of Magic and the Supernatural should...

The most striking improvements in the new Choice are the

replacement of Richard Dimbleby by Derek Hart of Tonight, the concentration on one main topic (instead of two as before) and the BBC's not insisting that all that it is doing is...

I called attention to American WOOLWORTH shares at $70, because

they were selling below the then value of their large holding in the UK Woolworth. In other words, you could then have bought the American business for nothing, but, as it was...

As a rule, convertible stocks do not greatly appeal to the private investor, who finds the mathematics of conversion awkward and the watching of the conversion dates tedious....

' Those people who talk grandly about t ti ! `consumer movement'

a final dividend of 16 per cent, making 26 per cent for 1963, on car tal increased by a one-for-three scrip issue. A one-for-two scrip issue is now proposed. Group pre-tax...

This was a highly revealing interview of 1 14 kind which

Choice should give us regularly• takes the consumer behind the advertisement an ° the public image to the man at the top. But one improvement would be handing over such inter;...

The second half of the programme reported 0° Which?'s washing

machine tests. As it was take! at a reasonable pace and there was not too MEW of it, one got the point almost as clearly as on e does in print.

HE attraction of the Hodge Group is that I its

interests include not only those of Gwent and West, but others wider spread, including the property division, which has yet to contribute to profits. Another attraction is the...

By ALAN BRIEN I SPENT Iwo and a half hours on Tuesday morning in the bath reading Shake- speare's sonnets. Soaking there like Proust's petite madeleine, there came ...---. back...

What interested me far more in re-reading the sonnets after