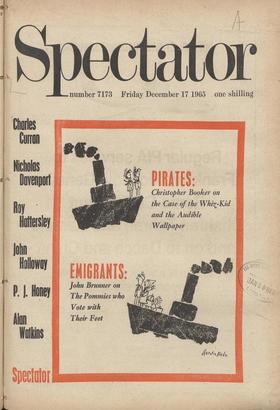 TN a back-handed way, the Government's 'White Paper on the Adult Offender amounts to a declaration of no confidence in the reformative pretensions of the prison system. The...

'A MARCH ELECTION?' queried the newspapers one after another. 'De Gaulle to be beaten?' suggested some, more hesitantly. 'Hanoi hints at agreement,' led another, taking a line...

All The News That's Fit To Print By CHARLES CURRAN T HE Moors murder case is something out of the ordinary. It is getting out-of-the-ordinary treatment from some newspapers....

After. the Reshuffle DEV MURARKA writes from Moscow : . The latest changes among the top men in the Kremlin are part of the process of tidying-up before the guests arrive for...

Next week's 'Spectator' will be published two days earlier than usual so that it will be available for the Christmas holiday. The special contributions will include: LORD...

Money in the Snow HILARY HAYWOOD writes : With the recent opening by the Rank organi- sation of the biggest hotel building project ever undertaken in the Highlands, and the...

Mr. Kaunda Has made a terrible blunder. He thinks a Javelin Too old to travel in. CHRISTOPHER HOLLIS

The Decline of the Pressure Group By ALAN WATKINS R L the present indications are that shortly after this piece appears the Plowden Com- mittee will recommend some measures of...

The Whiz-Kid and the Audible Wallpaper

By CHRISTOPHER BOOKER A N YONE given to supp.)se that crop-haired, tough-minded, dynamic Mr. Wedgwood Benn, inheritor from thirteen years of Tory mis management of one of the...

The Public and Private Mr. Stevenson

From MURRAY KEMPTON NEW YORK A ANOLD BEICHMAN has offered in these pages ,(December 3) a spirited and detailed argu- ment from the public record against Eric Severeid's...

Vietnam : To the Bitter End ?

A Nation Voting with its Feet

By JOHN BRUNNER D uRiNG the last few years one of the most remarkable grassroots movements of our time has been gathering pace almost unobserved. While top people look the...

Goodbye to All That By ROY HATTERSLEY, MP W HEN I was twelve I was desperate for the ownership of the steel industry to pass into different hands—mine. I was not moved by the...

Fallible itdol M. Mitterand, it seems, may come near it

after all. General de Gaulle has been shown to be fallible, vulnerable and above all capable of being defeated. Once this has happened, the current is almost bound to continue...

Playing it by Ear It has taken Mr. Grimond five

Mein Gott I am very interested in the Hull North

T HE Prime - Minister, I hope, goes to the United States to explain and to listen, not to advise. He has left behind him a Foreign Office Blue Book on the British involvement...

Pantaloon On November 12, the day after UDI, Mr. Bottomley,

the Secretary of State for Common- wealth Relations, proclaimed Mr. Ian Smith to be 'a man of character and integrity.' Four weeks later Mr. Bottomley told the House of Commons...

I dislike December. I dislike cold Weather. . I dislike getting up, at 6 a.m. I dislike Monday morning. But to get up at 6 a.m. (tea-time in. Australia) on a cold December...

Tailpiece I heard on television on Sunday evening that 'it

is stressed in Whitehall that Mr. Wilson has given no thought to a March general election.' Any other competitor for the least likely news

' On the decision to purchase the US F-111, the Prime Minister is again holding his breath. The time taken to complete the defence review gives him a further excuse. But we...

SIR,—Your correspondent E. M. Milne is too naïve by half. Ghanaian officials told me 'Osagyefo' meant 'Redeemer' when I visited Accra. If Mr. Milne wants to believe in...

S112,—Is Strix really correct in calling a duke a 'juke'? Royal authority would appear to be against him. In the recent film of his life, the ex-King of Great Britain spoke of...

SIR,—In reference to Leslie Adrian's column in the December 3 issue of the Spectator, wherein he describes the red tape prospective tourists to the United States are subjected...

S1R,—Even if Donald Southgate is right in saying that in the 1951 election the numbers of Socialist and Conservative supporters were almost exactly equal, that still does not...

- Sta,--Stansted is a poor site for the United King- dom's next major international airport, but not solely for the reasons of rural inconvenience given by your correspondent....

A Journalist Jailed SIR,—The sentence on the German freelance journ-

Complete with Frame By MARIO AMAYA O NCE upon a time—about four years ago— when English art was still considered provin- cial and unfashionable abroad, it was quite easy to...

HOREOGR APHERS are the rarest of creative k_,birds; the fingers of two hands will do to count the major talents at work today, and still leave the thumbs to turn down at various...

Whose Track? L A ST week saw the somewhat obscure and relatively unrecorded birth of an organisa- tion called Track—the Television and Radio Committee founded with the laudable...

As a reader you may have the Spectator sent to your friends, in any part of the world, as your Christmas or New Year Gift for a year (52 issues) for almost half the normal...

Doubting the Hero H ERO-WORSHIP has its roots in childhood, hero-debunking in adolescence. Which of the two happens to be more realistic depends on how much of a hero the hero...

By the window-drizzling leaves, Underneath the rain's shadow, What is that land, you said, beyond • Where the strong river bends the meadow? Is it Cornwall? Is it Devon? Those...

By JOHN HOLLOWAY H AS Hardy dated? His novels belong intri- cately to their Wessex world; and if that has now no bearing on the world of today, we must find out whether his work...

The Plan of Attack

'IT had to come.' The comment of Walter Hines Page, American Ambassador to London, on the outbreak of the First World War, might equally well be applied to the current crop of...

GUNTHER GRASS is the bright particular star of contemporary German literature and a new novel by him is, or should be, a portent. For Herr Grass, in addition to his enormous...

VIViAN ELLIS's How To Be a Man About Town (Frederick Muller, 15s.) turns out to be not quite what it appears at first: it hasn't the knockabout humour that would seem to go...

TALL MALL,' writes J. M. Scott at the end of this brief and elegant account, `[has now fallen] victim to the modern passion for the one-way street, creation of the one-track...

The Threat to World Liquidity BY NICHOLAS DAVENPORT l'Nis is the most irascible Christmas I can J remember. The whole world seems to be of bad temper and selfishness. I am not...

By LOTHBURY D URING the year ended June 30, 1965, 3. Gliksten and Son, hardwood and soft- wood distributors and manufacturers of doors and plywood veneers, made record profits....

By CUSTOS M ARKETS have been unsettled by the rise in the American bank rate—a forerunner usually of a setback in Wall Street—and by events in Africa, although the threat by...

Table Dote By LESLIE ADRIAN IT goes against the tradi- tional grain, of course, but many more people eat out at Christmas than would earn Aunt Edna's approval. They even...

By MARY HOLLAND s, tainers are there for the buying. The first time I sat at an editorial planning conference the subject under discussion was the New Year. The full-length...

By ALAN BRIEN IT is almost impossible to think of any common human activity which has not at some time some- where been classified as a crime-printing the Bible, freeing slaves,...