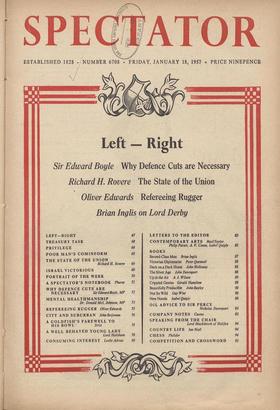 T HE contest between Mr. Macmillan and Mr. Butler for the Premiership has been viewed in several different lights—as a struggle between right and left in the Con- servative...

O N December 16 a leading article appeared in the Sunday Express under the heading 'Privilege,' complaining of the 'prodigious supple- mentary allowances' of petrol given to...

m R. THORNEYCROFT'S long and successful stay at the Board of Trade has now earned him an enviable opportunity at the Treasury. He has it within his grasp to introduce two major...

THE Budapest gathering of the satellite clans presided over by Mr. Khrushchev and Mr. Malen- kov in indissoluble union seems to have given the death-blow to the foreign policy...

From Our Middle East Correspondent Jerusalem O N October 29 three powerful Israeli columns moved over the frontier into Sinai, and by the fifth day the last resistance in the...

The State of the Union

By RICHARD fr lie President this week fulfilled his constitu- tional responsibility for giving 'the Congress Information of the State of the Union: It was a listless message, as...

Reactions abroad to this upheaval have been pretty mixed. Greece and Egypt rejoice in the 'triumph of right,' but most Western countries have paid handsome tributes to Sir...

MR. MACMILLAN is generally believed to stand on the the right half of the party. — The Times, January 11. Mn. MACMILLAN'S own political record for the past twenty years places...

I SAW an appalling thriller called Lisbon (or rather the

first half of it) the other night. It did, however, contain the following line, spoken by the master-mind to his secretary: You're getting more stupid every day, Selwyn; this...

I SEE THAT among Communist leaders in the market for

a United Front is Dr. Cheddi Jagan, the split in whose People's Progressive Party of British Guiana has evidently given him to think. The remits of his meditations are revealed...

IT IS NOW IWO years almost to the day since

I first argued that the Hunter fighter was a liability. This was not the product of any inside informa- tion : the aircraft's failings had long been known, and discussed on more...

BOTH THE STATEMENT of the Labour Shadow Cabinet and Mr. GritIiths's broadcast were careful to absolve the Crown from any blame, but the Labour Party has contrived to convey a...

From the Horse's Mouth SIR ANTHONY EDEN'S return and the

message with which he marked it should put a halt to ill - informed and often ill - natured rumours that he was about to resign because of ill health. . --Sunday Times,...

LORD SALISBURY'S Visit to the Queen caused a good deal

of suspicion in some quarters and some dark murmurings about the age-old power of his family. Though in a sense, of course, his visit revealed the opposite; he was almost the...

THE POLITICAL CORRESPONDENTS of the national newspapers--with the single exception

of one free-lance, Mr. Randolph Churchill—ought to be hanging their heads in shame. Those of them Who tipped at all, tipped Mr. Butler as the new Prime Minister. Why, I wonder,...

A PROBLEM TO which the labour relations experts should turn

their attention is how to stop manage- ments setting themselves up as judges in their own case. This reflection is induced by reading the recent reports of the Monopoly...

SIR ANTHONY has said to me more than once that

foreign affairs would not be nearly so difficult but for the foreigners.—`W. L. A.' in the Yorkshire Post, January 10.

Why Defence Cuts are Necessary

By SIR EDWARD BOYLE-, MP r E cuts in defence expenditure which were announced on Wednesday represent only a small instalment of the cuts which have been demanded; and I think it...

By DR. DONALD Mel. JOHNSON, MP 'He ought to be locked up!' How many of us say this, half jokingly perhaps, but reveal- ingly just the same—reveal- ingly of the casually...

By OLIVER EDWARDS ILI E. must see that the opposing players do their inbest to retire ten yards from the mark, that the kicker's side are behind the ball when it is kicked, that...

By JOHN BETJEMAN T TAKE full advantage of the National Health Service, and find it very useful and thank God for it. All the same, I would like to know whether there are any...

12 A Goldfish's Farewell to his Bowl By STRIX I T

was great fun writing a book. One lived with It became a companion. It built an impal- pable crystal sphere around one of interests and ideas. In a sense one felt like a...

A Well Behaved Young Lady • Dear Joan, may I ask

you a question or two? (Proud imperious Joan, reply.) Does your heart ever beat as others do? Will nothing melt that glacial eye? Does the languorous charm of flanking June...

The Spectator offers three prizes of eight guineas each in a competition open to boys and girls at school in the United Kingdom. Entries should be in the form of An original...

• • • . . Carpets on the Cheap By LESLIE ADRIAN ARPETS are quite the most formidable item in the budget of those setting up home, or even keeping a home presentable, today. I...

SIR,—Your 'Despised' correspondence reminds me of an occasion before the

war when I was staying at our Embassy in Rome. A young honorary attache, asked during dinner how he proposed to amuse us for the remainder of the evening, replied, 'Let's go...

SIR,—The Spectator and its contributor, Mr. Christopher Hollis, are both to be congratulated on the candid, yet good-natured, analysis of 'Govern- nient by Old Etonians.' But,...

seems to me to be equally mistaken about the hydrogen bomb and about foreign policy. He says : 'We cannot afford to leave the thermo- nuclear weapon to the United States for...

and corruptness appear in the daily press, are accepted as truth, and used as counter-accusations whenever our conduct in Egypt is questioned. Such stories have increased since...

SIR,—For the information of Mr. Jesman I wish to state

that I was a member of Maadi Club for seven- teen years. During that time I sat on various com- mittees and sub-committees and I never remember the refusal of an Egyptian...

SIR,—One hesitates to cross swords with a former Prime Minister writing about a former Foreign Minister, especially when it is to contradict his high opinion of someone for whom...

SIR,—We are often warned that in a democracy, in which universal suffrage obtains, statesmen are ultimately replaced by politicians because vote- catching becomes the prior...

SIR, —May I supply the hot air to launch Mr. Peacock's balloon? He is mistaken. The LNER adopted the apple-green livery of the old Great Northern Railway. The NER green was...

SIR,-1 was indeed glad to read the letter from Mr. Solomon on rats and poison. The thought of the agony suffered by these un- happy animals by the administration of these...

THE European atmosphere at the close of the nineteenth century was unsympathetic to all forms of the art of dance; and it is more than mere coincidence that the many movements...

Waiting for the Train

WHATEVER else Samuel Beckett may be he is a great -entertainer. Waiting for Godot was a very funny play. All That Fall, written for the Third Programme, threw up lines of...

Rebuilding London LONDON'S architectural pros- pect is far from encouraging. We have neither the economic resources nor, it would seem, the social dynamism to trans- form the...

JANUARY 21, 1832 PRIOR to the Revolution, the Foundling Hospi- tal in the metropolis of France was the only one in the kingdom; from all parts children were brought to Paris to...

Two pairs of books (two each on contemporary Russian and on non-Russian ballet) precisely re- flect the impact of the two kinds of ballet on their respective societies. Ballet...

JUST occasionally you meet a film so outrageously, exuberantly and felicitously bad that it brings happy tears to the eyes. Such a film has " turned up this week and for a jolly...

By BRIAN INGLIS 1D VERY student of English nineteenth-century politics is likely at some time to ask himself why Edward Stanley, with his advantages and talents, should in the...

Dark on a Dark Horse

Fr IF. HAND OF A STRANGER (Journal d'un htconnu). By Jean Cocteau. Translated by Alec Brown. (Elek Books, 17s. 6d.) rOWARDS the end of this book, M. Cocteau writes that it is...

THis is Dr. Waley's nineteenth volume, and has all his familiar virtues : profound scholarship lightly wOrn, wit, wisdom, a deliciously grave sense of the absurd, all expressed...

THE BIRTH OF ROWLAND: An Exchange of Letters in 1865 between Robert Lytton and his Wife. Edited by Lady Emily Lutyens. (Hart-Davis, 25s.) • ONE of the most amusing of the...

THE TRAGIC LIFE OF TOULOUSE-LAUTREC. By L. and E. Hanson. (Seeker and Warburg in association with Chatto and Windus, 25s.) Tuts is indeed the story of a tragedy. A wonderful...

Up in the Air

Wrrfrotrr intention Mr. Malcolm Macdonald has given in this book a demonstration of his fitness to be a British envoy in foreign countries. He likes humanity: his book. which is...

WRITTEN about the time that Ezra Pound was urging that good poetry must first have the qualities of good prose, Rupert Brooke's essays are, on the contrary. good in so far as...

Their blank and everyday disguise Hides nothing that I do not know, And though I cannot see their eyes, Blank pools of nothing lie below. Lost in a private darkness, these...

By CUSTOS THE new Prime Minister and his Cabinet were received with much enthusiasm on the Stock Exchange. Mr. Thorneycroft was felt to be the best Chancellor they had got and...

By NICHOLAS DAVENPORT WI1AT is lacking in the new Prime Minister's Cabinet is a separate Minister for Petroleum— the vital fuel which is to fill the power gap in the critical...

MISSING MOLES A friend who fauns told me the other

day about a field which used to shelter a lar g e number of moles but is now clear of the pests. A mole-catcher was to have been employed after a season when the binder...

Very early shallots are inclined to be at the mercy of the weather, in q uisitive birds and scratchin g cats. It is, however, timely to plant them in the next four or five...

By IAN NIALL TIME to stand and stare isn't g uaranteed by travellin g at top speed, but when one has been doin g thin g s with moderate haste there is pleasure to be had in...

Mr. Macmillan, if we are to believe the press, passed the time while waiting for the sumnions to the Palace by reading quantities of Trollope. The usual prize of six guineas is...

A prize of six guineas was offered for the most characteristic diary entry for the First of January, 1957, as it might have been written by any one of the following : Samuel...