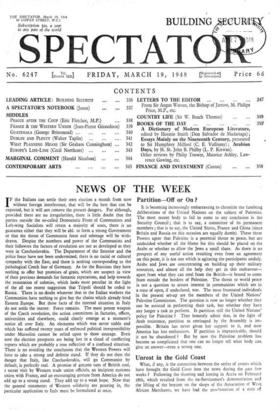 I F the Italians can settle their own election a month from now without foreign interference, that will be the best that can be expected, but it will not remove the present...

It is becoming increasingly embarrassing to chronicle the fumbling deliberations of the United Nations on the subject of Palestine. The most recent body to fail to come to any...

Unrest in the Gold Coast

What, if any, is the connection between the series of events which have brought the Gold Coast into the news during the past few weeks ? Following the shooting and looting in...

In the White Paper on Personal Incomes, Costs and Prices, the Government assumed the responsibility for keeping these three factors in control. That was such a sweeping decision...

Capital is so short and the amounts which are to be spent on colonial development schemes are so 'large that it is essential for that reason alone that all reports on the...

Cynically disregarding the gentlemen's agreement—for it was unmistakably that—that the recommendations of the Speaker's Conference of 1944 on electoral reform should be...

Any expectation that the representative meeting of the British Medical Association on Wednesday would at all ease relations between the Association and the Government was...

End of the Film War

The effect of the agreement signed between Mr. Eric. Johnston, for the Motion Picture Association of America and Mr. Harold Wilson, of the British Board of Trade, is that at...

T HE "cold war" came to Westminster this week in two different guises, literal and figurative. The first instalment was the literal one, launched as a result of the joint...

The Prime Minister's announcement regarding the elimination of ,Communists from certain positions in the Civil Service involving national security is distasteful but necessary....

BUILDING SECURITY "T HE fate of Europe and the world,"

said Mr. Bevin at the Sixteen Nation Conference on Tuesday, " will be decided by our work in the next few months." That is profoundly true, though it is not the whole truth....

Much too little attention has been paid to an almost

incredible statement made in the course of the court-martial at Hanover at which a British officer is being tried on charges respecting the treatment of German prisoners....

The decision of Convocation at Oxford to rescind a decision

already taken to send an address of congratulation to the Charles IV University at Prague on its 600th anniversary will, I imagine, be universally approved. The Southampton...

The North Croydon election is old news by now, though

it came too late for me to refer to it last week. All I need do now is to quote the headline which appeared in the Daily Herald on the morning of polling-day: TORIES PANIC ON...

The coal production figures for the last two weeks have

been interesting. The output for the first week was equal to just over, for the second week to just under, an annual total of 220 million tons. To achieve that would be of...

is said to have expressed his views recently on the prospects of war with that country. "I will bet all I have," he said, " that there won't be war with Russia in the next five...

W HEN a prominent American journalist appraises the British Press at length in the columns of the New York Times his assessment deserves some attention. The writer, Mr. Walter...

PRAGUE AFTER THE COUP

By ERIC FLETCHER, M.P. N znd March the National Executive Committee of the Labour Party issued a statement on Czechoslovakia which concluded with the words, " Those who seek to...

By GEORGE BRINSMEAD T HE Guatemalan Government have demanded that their claims against Great Britain be placed before the Pan-American Conference which is due to open at Bogota...

By WALTER TAPLIN T HE Irish finally rose in rebellion to break the English of a habit—the infuriating habit of behaving as if Ireland were not a foreign country. There is not...

By SIR GRAHAM CUNNINGHAM* T HE opening words of the Government's Economic Survey for 1948 read as follows: " The aim of this Survey is to review the economic state of the...

By CECIL NORTHCOTT The Christian plan of action in Europe is based on pastor and people, a scheme as old as Constantine but still resilient whether the church allegiance is...

By HAROLD NICOLSON A FTER three weeks of a by - election it is agreeable to return to the amenities of private life. An experience such as that which I have recently undergone...

" Enrico IV." (Academy.)—" Farrebique." (Curzon.)—" Dark Passage." (Warner.) Enrico IV is an adaptation of a Pirandello tragedy, and it is the first post-war Italian film that...

East and West Rant GOPAL'S second London programme, at the Saville Theatre, is almost entirely new, and even better than the first. There is now a small orchestra directed by...

THE THEATRE THE Marlowe Society's Troilus and Cressida was in several ways an exceptional performance. Mr. Rylands' approach to staging Shakespeare is, of course, singularly...

Paul Nash : A Memorial Exhibition at the Tate Gallery. " LAST summer," wrote Paul Nash in 1934, " I walked in a field near Avebury where two rough monoliths stand up,...

THERE have been so, many, and so many good, new records in the last three months that I cannot hope to do more than mention those that seem to me outstanding. First of all...

MUSIC A WEEK'S festival of Bach's music at the Albert

Hall has raised again in my mind the question to which I never find a satisfactory answer. Why do the English public crowd to hear the music of Bach ? Why are performances of...

J. Brown's article on this subject is able and challenging, but it fails in that it attempts no examination of the alleged difference between Communism, as at present...

Six,—Mr. Ronald Rees's dislike of the Communists' philosophy, which I share, apparently leads him further than me in condoning the policies' of their opponents, the Chinese...

JAN MASARYK'S DEATH Snt,—It is a sound instinct to refrain

from making harsh moral judge- ments about the dead, especially when they are men who in their lives displayed to a striking degree qualities of ethical and spiritual elevation...

SIR,—I have read with great interest the Children Bill which is now before Parliament. Although, obviously, it represents a very great advance in social thinking, there is one...

SIR, —Reflecting upon the present political climate of his own country, I feel sure that Mr. Jori will understand why I should decline to make public the identity (even if it...

SIR,—The Public Relations Officer of the B.M.A. casts doubt on Mr. Inwood's claim that competent newspaper men could have extracted the " salient items " from the B.M.A....

THE SCHOLARSHIP OF BISHOP BARNES

Sta,—In the last paragraph of A Spectator's Notebook in your issue of March 12th, Janus mentions that Bishop Barnes has incurred criticism as a back number in the matter of...

SIR, —My experience in West Africa certainly does not support Mr. Cleland Scott's verdict that " the African has few equals as a spoiler of machinery," since for two years my...

SIR, —May I be allowed to supplement Sir William Beach Thomas's note on rhythmic lapses by quoting three unconscious hexameters in the Bible. They are: (1) " How art thou fallen...

AFTER spending the day in the New Forest, which to my view is rather more lovely in winter than in summer, I turned into the Verderers' Court at Lyndhurst, which remains the...

It is the kind fashion of the day to save salmon from excessive labour ; but they are not always as grateful as they should be. In the West Highlands, for example, not only have...

It is necessary to work in the potager to appreciate fully the proverbial value of March dust. The primroses, the daffodils, the flowering prunuses (such as Pissardii), the...

The state of mind of the veteran who is difficilis querulus laudator temporis acti Se puero, is not to be admired ; but there is an occasional exception. An old labourer whom I...

THE LIMITS OF LIBERTY

SIR, —In his article on Communism Mr. Brown asks " Must we in the name of liberty tolerate the activities of bodies bent on its destruction?" If we have any doubt as to the...

SIR, —In view of the criticism by your reviewer of my book of travel in Russia for being too friendly to the Soviets, you may be interested to know that I sent a copy to the...

SIR, —Whoever Janus may be in his journalistic capacity, no doctor will be disposed to thank him for his gratuitous piece of advice about " concen- trating on the basic salary."...

AN anthology such as this forces the reviewer to abandon the role of critic and become a guide who points out what pleases him and anything else he has time for. There are...

The England of Charles I

The Social Structure in Caroline England. By David Mathew. (Clarendon Press. 10s. 6d.) IN his new book (comprising his Ford Lectures) Dr. Mathew undertakes a survey of the...

Essays Mainly on the Nineteenth Century. Presented to Sir Humphrey Milford. (Cumberlege. Oxford University Press. 15s.) HERE we have a rare garland of university shrubs, all of...

Arabian Days. By H. St. John B. Philby. (Robert Hale. 21s.) WHY do so many EnglishMen fall in love, like Mr. Philby, with Arabia? Is it, as some think, the endearing...

Goya : Drawings from the Prado. Introduction by Andre Malraux. (Skira : Horizon. 42s.) A HANDSOME book is a delight, a welcome present. A useful book ranks a little higher ; one...

at THE SPECTATOR" CROSSWORD No. 469 [A Book Token for

one guinea will be awarded to the sender of the first correct solution of this week's crossword to be opened after noon on Tuesday week March 30th. Envelopes must be received...

SOLUTION TO CROSSWORD No. 467 SOLUTION ON APRIL 2nd The

The Bible and Modern Scholarship. By Sir Frederic Kenyon. (Murray.

3s. 6d.) THIS is a most valuable little book. It is a brief - but devastating comment on the Bishop of Birmingham's recent and controversial volume, The Rise of Christianity,...

The Story of Richmond in Yorkshire. By David Brooks. (The Dundas Press. 12s. 6d.) MR. BROOKS, the town clerk of Richmond, has produced a thoroughly praiseworthy example of local...

By CUSTOS ADMITTEDLY, these are queer times, but when we find the F.B.I. co-operating with a Socialist Chancellor of the Exchequer to freeze Ordinary share dividends we may be...