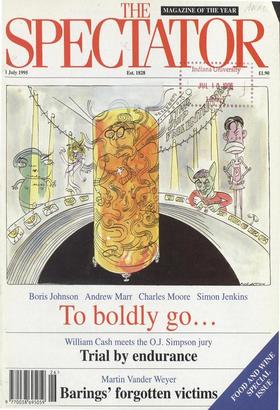 M r John Major, the Prime Minister, after having resigned as the leader of the Conservative Party, was challenged by Mr John Redwood, after he had resigned as the Secretary of...

ANDREW MARR T he last red-gold light of evening flash- es along the south aspect of Westminster; the Thames flows almost sweetly; and at every terrace table Conservative MPs are...

Why, exactly, would people not vote for John Redwood? CHARLES MOO RE I f one had one's doubts about John Red- wood's chances as he pondered his candida- cy over the weekend...

Boris Johnson plunges into the steaming ferment of the Parliamentary Conservative Party and smells, among other things, a change of direction IN A SOFTLY lit corridor leading...

The Daily Chronicle of Saturday gives a very interesting account of an experiment in peasant proprietary recently tried in Dorsetshire by Sir Robert Edgcumbe. About seven years...

Reginald Potterton immerses himself in Canton life, and is duly disgusted by the Chinese 'economic miracle' Canton EVERY MORNING when I leave my hotel on Shamian Island I run...

CAN'T TAKE IT ANY MORE'

William Cash talks to members of the O.J. Simpson jury, and discovers why the murder trial might never be concluded Los Angeles NO AMOUNT of frequent flyer bonus miles will...

IT WAS a spoonful of tea in which he had let soak a morsel of madeleine which stimulated the efflorescence of Proust's memory. What, in later life, will have the same effect on...

Next week the Bank of England's report on Barings is published. But it will not address the real scandal, says Martin Vander Weyer IT WILL NOT be long now before shop windows...

A FRIEND of my husband's, who lives in Norfolk, has all his post franked: `KFC 2Pcs Chicken, Lg Fries, Rg Drink —BUY 1 — GET 1 FREE! Take to KFC for full details.' He finds...

Money, brains, family John Major suffers the merchant bankers' revenge CHRISTOPHER FILDES I do not share the general belief that John Redwood is an alien who comes from outer...

Sir: As a retired GP, I read your article 'All

you need is life' with admiration. In the long run I have never seen Down's syndrome children bring their families other than happiness. Since they do not become independent on...

Sir: Thank you for writing your article, 'All you need

is life', thank you for its clarity and its courage. Your sound, firm and wholesome approach is a welcome antidote indeed to the pro-extermination lobby that appears to dominate...

Sir: Thank you for writing 'All you need is life' (17 June) — and if I too were not an atheist, I would thank God that you were in the position to publish it. It articulately...

Sir: I would like to congratulate and thank you for

your sensitive and rational pro-life article published in The Spectator. I am a feminist and a socialist and am appalled that most people I meet professionally assume that I...

Sir: I was heartened by Mr Lawson's strong denunciation of

prenatal testing for Down's syndrome directed towards eliminating Down's babies before birth. As the parent of a Down's child, and having met other children with varying...

Sir: Dominic Lawson seems, in his article `All you need

is life', to imply that he is an atheist. If my interpretation is warranted, might I ask him where one could find the tenets of his philosophy, because I am cer- tain they would...

Sir: Michael Armitage (Letters, 24 June) seems to base his

argument against homo- sexuals in the military on the fact that as a young man he and his colleagues sniggered about an assumed — not proved — rela- tionship between a...

Sir: Mr Alan Watkins claims that Sir Kings- ley Amis's best novels 'have a Welsh or, specifically, a Swansea setting' and he includes Lucky Jim among them (Books, 10 June). But...

Sir: Although Mr P.R. Watkins vaguely dis- agrees (Letters, 24 June) with my article on British and UN attitudes to Bosnia, he does not contest the accuracy of a single factual...

Sir: One hesitates to take issue with a sage but Auberon Waugh (Another voice, 27 May) is mistaken in his belief that Australia lost the Vietnam war. Australia's war aim was to...

Sir: If Mr Palmer imagines that the average air-marshal has often slept in a barrack room between two homosexuals, he knows little of either air-marshals or of homosexu- als...

Sir: 'Whoever heard of a queer golfer?' Mr Paul Johnson asks (Another voice, 17 June). One answer that comes to mind is Terence Rattigan, fine playwright and fine player at...

Sir: After the 1974 general election The Spectator ran an article entitled 'The squalid squatter at Number Ten' in which Edward Heath was condemned for trying to hold on to...

Sir: What tricks the memory can play. Paul Foot, in his review of Thatcher's Gold (Books, 24 June) says that in early 1981 he telephoned Downing Street and spoke to `the press...

Sir: When any phrase or saying leaps to prominence it is always instructive to look at its derivation and meaning. `Stalking horse' now features in all the papers, rather than...

Sir: It was pointed out in The Spectator and only

in The Spectator — that John Major's driving force was vanity. Thank you for this cipher which has provid- ed all anyone need ever know about this com- plex man and his actions...

Sir: Taki ridicules `a sweet young thing' who thinks that Shakespeare wrote about Henry VIII. My edition of Shakespeare's works includes The Famous History of the Life of King...

Tory party politics has become a grim pursuit, where men strive only to do one another down SIMON JENKINS T he Rose Garden was a mistake. John Major opened his bid to regain...

Food for the road Nigella Lawson IN French Provincial Cooking, Elizabeth David, late of this parish, gives a recipe for petits souffles aux courgettes. 'I first had these...

The Parker effect Andrew Jefford A 'parasitical activity' is how the candid Oxford Companion to Wine describes wine writing. Wine writers themselves rarely contest the...

British is best Martin Vander Weyer G oing to market on a Friday morning to buy English cheeses — some Coverdale perhaps, or fresh Farndale goat in herbs and olive oil, or a...

Dear Q. How does one assert one's rights over certain dishes when dining with a gang of people in a Chinese restaurant? It is tricky when you have agreed to share vegetables...

The bean boom , Rebecca Nicolson I n New York, it used to be that if you wanted to meet someone for coffee you said, 'Meet me at Starbucks.' Or, to be more precise, you said,...

The ears have it

Andro Linklater TALKING FROM 9 TO 5: HOW WOMEN'S AND MEN'S CONVERSATIONAL STYLES AFFECTS WHO GETS HEARD, WHO GETS CREDIT AND WHAT GETS DONE AT WORK by Deborah Tannen Virago,...

and personal freshness Andrew Barrow THE QUEER CAPTAIN by John Bayley Duckworth, £14.99, pp. 181 I t would be a pity to spoil the reader's enjoyment of this short novel by...

Trees, stubborn to their roots, stare straight ahead, expressionless; mutinous, the bushes bristle with argument, while silence, purse-lipped, picks self-righteously along. For...

The end of everything unfinished

Thou wast not born for death, Immortal Bard

Hilary Corke JOHN KEATS: A LIFE by Stephen Coote Hodder, £18, pp. 356 S hortly after his 21st birthday Keats was summoned to the obvious interview with Richard Abbey who had...

The prints of darkness

Alan Wall THE DEVIL: A MASK WITHOUT A FACE by Luther Link Reaktion Books, £17.95, pp. 208 M addelena Stradivari, the most prominent priestess of the Italian Satanic Cult...

Alan Judd S ometimes things come together as they should. They recently have for the novelist and biographer, Patrick O'Brian; within a week of the announcement in the Birthday...

Australian Diary Too, too tantalising Rupert Christiansen looks at Australia's formidable and feeble art scenes Sydney t otaltotal of 652 improvements have been lavished in...

Perfect technique J ann Parry I s Linford Christie over the hill at 35? He (and everyone else) will know that the time has come for him to retire from top- level sport when he...

Under the covers Marcus Berkmann I t is impossible to resist. To the success- ful pop musician, tired of writing his own songs, empty of anything to say but still obliged to...

Congo (`12', selected cinemas) Missing the vital point Mark Steyn T he thing about Michael Crichton is he gets there first. Yes, he hacks his way through the narrative...

All strung out Taki I t was nice to see Mats Wilander, a gent, by the way, win from the back court on opening day of Wimbledon, despite the fact he was facing a local...

Sharing the ache Carole Morin M y daughter looks nothing like me,' Maddie replied, disgusted. As we were going into the surgery, she muttered, 'I don't like the look of him.'...

Eden without the apples Jeffrey Bernard Majorca T his is the first time I have been abroad and on holiday since I went to Sydney three years ago to see Yeunis Waterman in the...

Politics and anger Nigel Nicolson T he Spectator gave a dinner at the Savoy last week to launch Lady Thatcher's second, actually the first, volume of her autobiography. The...

All cash Andrew Robson OMAR SHARIF is not Egypt's only world- class bridge player. Hagi Dagher a fellow countryman of Omar's — was the only declarer to make slam from the...

Command performance Jaspistos IN COMPETITION NO. 1887 you were bidden to write a poem to mark the occa- sion of my 68th birthday. First, thank you those kind ones who went...

A first prize of £25 and a bottle of Graham's Late Bottled Vintage 1988 Port for the first correct solution opened on 17 July, with two runners-up prizes of £15 (or, for UK...

A fond farewell Frank Keating THAT GRANDEST of sportswriters from my ripe green salad days, John Macadam, said always to tip the long-shots with an absolute certainty. If, in...