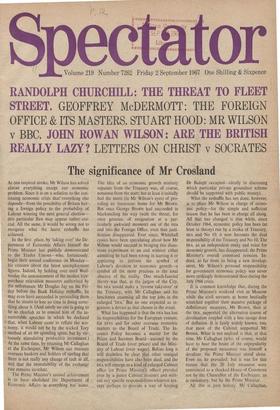 The significance of Mr Crosland

At one inspired stroke, Mr Wilson has solved almost _everything except our economic problem. Since it is on a solution to the con- tinuing economic crisis thaeeverytbing else...

The trouble with cricket is that people will fall into the trap of taking it all too solemnly. It is a game possessing its own dignity in an un- rivalled degree : there is no...

Chinese diplomats ran berserk in Portland Place, attacking police and bystanders outside their ?nation with iron bars, axes, broomsticks' and a gun The crowd retaliated with...

The Foreign Office and its masters

WHITEHALL COMMENTARY GEOFFREY McDERMOTT The Permanent Under-Secretary of the Foreign Office is a powerful man. But just how powerful? How much real influence does he have on...

The scarcity of abundance

CHRISTOPHER HOLLIS Grain and oil-seed values are overshadowed by the possibility of bumper harvests— Financial Times. Lo, the poor Indian, whose untutored mind Is by the march...

AMERICA A. JOHN ADAMS For the quarter of a million Englishmen who 6ount New York their home, summer is a time for admiring anew the boundless energy of the American middle...

FRANCE MARC ULLMANN Paris—In France the Sphinx has two faces. No longer do we weigh up, analyse, interpret and balance the sayings and silences of General de Gaulle alone....

TRADES UNION CONGRESS FRANK SHAW 'He told the Congress of many unofficial strikes, which were due to the unions' inadequate attention to the needs of the masses, and con- tempt...

A licence to print farthings

PAPER GOLD JOCK BRUCE-GARDYNE Last Saturday, we are told, was "a great day in the history of international finance." Bank Holiday Saturday is not the best occasion to write a...

THE LAW R. A. CLINE The so-called triumph of the Enfield parents over their local educational authority initially' stirred the nation's Goliath complex. But a few thoughtful...

J. W. M. THOMPSON If only the British diplomats and their families could be got safely out of Peking, I don't suppose anyone would be the poorer for the ending of the current...

From the 'Spectator, 31 August 1867—The South- Eastern Railway is about to try a little experiment on the pockets of the public. It seems that gentle- men, even Members of...

What kind of gap?

SCIENCE PETER J. SMITH This year we should properly be celebrating the centenary of the first technology gap— for contrary to what one might suppose, the first significant...

THE PRESS RANDOLPH S. CHURCHILL Did you read in the gossip columns early last month about the dinner party given in a private room at the Dorchester Hotel by Mr Cecil...

TELEVISION STUART HOOD So, as expected, Mr Bowden that is—Lord something-or-other that will be—moves in as chairman of the ITA. Having in his day whipped in the Labour rebels,...

Are the British really lazy?

PERSONAL COLUMN JOHN ROWAN WILSON Nations in times of difficulty easily develop neurotic attitudes towards themselves, and of recent years the British have become very mixed up...

D. W. BROGAN Before reviewing Dr Enid Starkie's fascinating new book, Flaubert: The Making of the Master (Weidenfeld and Nicolson 63s), I should, as they do in the House of...

Charlotte's life MARTIN SEYMOUR-SMITH Wuthering Heights: on Anthology of Criticism compiled by Alastair Everitt (Cass 30s) It is not quite fair that every biographer of...

West of the park

M. L. ROSENTHAL Near the Ocean Robert Lowell (Faber 18s) The best poem in Robert Lowell's new volume is one of the shorter pieces, 'The Opposite House.' It describes a scene to...

Loup 45s) Chekhov's world RONALD HINGLEY Simple and straightforward on the surface, Chekhov was one of the most tantalisingly elu- Sive of men and of artists; which is why so...

JOHN ROWAN WILSON With the general improvement in education, the old paternalistic concept of the doctor is becoming increasingly out of date. A new attitude towards the...

CHARLES REID Since Carlo-Maria Giulini has been renowned for years as a conductor above all of Verdi's Messa da Requiem and isn't in any case a con- spicuous pedlar of the...

BALLET CLEMENT CRISP Poaching on each other's preserves is not a recommended activity, even for ballet com- panies, but Festival Ballet and Covent Garden's Royal troupe are...

Muddied oafs HILARY SPURLING Peter Terson's Zigger Zagger, which last week celebrated the opening of the football season, is a powerful and, so they say, a faithful portrait...

Mississippi sleuth PENELOPE HOUSTON Hurry Sundown (Plaza, 'A') The Whisperers (Odeon, Marble Arch, 'AS) Given two Hollywood films on roughly the same subject, coming out about...

CUSTOS This should have been a quiet week in the City but it has been far from that. First, and most „important, there was the agreement reached by the ten rich nations of- the...

A CORRESPONDENT There are four main publics for business educa- tion in Britain. These are the business com- munity, the British academic world, the Govern- ment and the...

JOHN BULL Wall Street and Throgmorton Street have marched roughly in step this year. Both reached record levels in early August, both have since fallen back, though not...

CONSUMING INTEREST LESLIE ADRIAN If there were an investigating committee into un-British activities, or an Act of Uniformity imposing the British way of life, I should do well...

August) has used the case of Tito and Mihailovic in support of his thesis that 'sometimes communists are the most effective fighters.' The Germans, who were in an excellent...

Sir: One of your correspondents makes the extra- ordinary statement

that the earliest gospel was writ- ten about 80 years after the Crucifixion. This would mean dating Mark c. 110. Now Matthew, who bor- rows from Mark, is almost certainly quoted...

Sir: I once heard many years ago the Jesus of the Fourth Gospel described In Yorkshire idiom as 'a nark,' which means, I suppose, 'a hcr.toring bore.' I have to confess that...

Vietnam: how to end the war

Sir: Without wishing to enter into debate on the re-

spective merits of Socrates the son of Sophroniscus and Christ the son of—who knows?—I feel I cannot let Auberon Waugh's derogatory remarks on the sanitary arrangements of the...

(a) the Irish border does not divide Ireland into a northern and a southern half, unlike Korea's and Vietnam's; and that (b) not all : - e- publican-minded Irish folk are on...

Sir : In your issue of 18 August you published

a letter from a Mr Mottram which contains a violent attack on the proposed legislation against racial discrimination. Its tone and content hardly give it a claim to be seriously...

Sir: May I refer to Herr Menshausen's letter in ■

Sir: Frank Clements's 'Rhodesia : Afrikanerdom Bids For Power' (25 August), by implying that such a bid is sinister, may suggest to some readers that Rhodesian English-speakers...

Sir: In their commendable haste to get something done about family poverty, destitution in retire- ment, the pauperisation of the disabled and other urgent social problems, a...

Sir: While one can appreciate the motives which lea Herr Menshausen to write his letter (18 August). its -inaccuracies and its rudeness deserve reproof. In the first place, the...

Sir: Mr Mottram's reasoned letter (18 August) has provoked the type of reply we have come to expect whenever the opinions of those who are inimical to the true interests of the...

JOHN WELLS I first met Claud Cockburn at the height of the Profumo Crisis. The whole of London, and in particular the Private Eye office over the betting shop and the...

Sir: As an old seaman, may I express appreciation of and agreement with Sir Denis Brogan's remarks concerning the 'Queen Mary' (18 August), a ship which despite all publicity...

Sir: In the course of his article in your issue of 11 August entitled 'Biblical Stint,' your music cor- respondent Mr Charles Reid made a passing refer- ence to the translation...

has no precise meaning; but if he fully grasps the meaning of tonality he should have no difficulty with 'atonality' Again, which of the (three) possible meanings of...