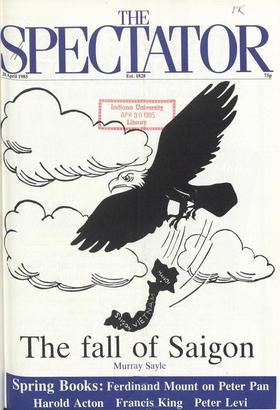 Who are they? Charles. Moore W ho do MPs think that they are? I ask this question unrhetorically. I only ask, like that annoying woman in David Copperfield, because I wish to...

The Royal Family is Britain's prize 1 possession. Even 40 years on, the taint of Nazism undermines it,' said the Daily Mirror on Tuesday, exulting in its second Nazi scoop of...

L rr Ihe incredible stamina which had JL allowed him to do the work of two men was beginning to flag. He no longer had the time or inclination to play golf.' So wrote Joe...

very odd little Reuter dispatch circled the globe the other day before dis- a PPearing into deserved oblivion, although not before ensuring that Reuter served the interests of...

Yobs ahoy Auberon Waugh A a horribly expensive ball I gave in Somerset for my elder daughter two summers ago over 60 glasses were broken. The guests who were composed for the...

A ny middle-aged journalist worth his .salt must have been trying to remem- ber just where he was and what he was doing on VE Day, so as to be able to cash In on the potential...

The fall of Saigon

Murray Sayle New York, New York C an it really, honestly, be ten years? So %...."we asked ourselves the other evening, as the prudent Perrier flowed like water in Frances...

Michael Sheridan A tropical dusk can usually be counted on to bring people out on the streets as the day's heat ebbs. But when the light fades in Davao, the largest city on the...

Howe and the people

Timothy Garton Ash Warsaw W ill he go to the Church?' asked my old newsagent, when we first ar- rived in Warsaw. No need to ask 'Who he?' He Howe. The Church: St Stainslaw...

Patrick Bishop Delhi 'This will not go down well back home, 1 you know,' said one of the boys on the bus last week as we watched Mrs Thatcher sweep grandly along yet another...

To war with Hoxha

David Smiley T first met Enver Hoxha in July 1943. At ithat time I was second in command of the First British Military Mission to be infiltrated into Albania by SOE, led by...

Sir, — In your comments on the 4th inst. on the Conference recently held in London, on the subject of self- supporting cheap meals for school chil- dren, I notice that you say...

Lessons from the past Paul Johnson he British Museum is notoriously bad about publicising the many excellent special exhibitions it stages within its caver- nous depths. For...

A run for your money

B depositors who g et a decent rate J-.) of return on their money can thank Save & Prosper. Bank depositors who *don't, can offer more than thanks. It was S & P who, a couple of...

N atWest's user-friendly idea of letting its customers choose cash-card num- bers which they can remember (City and Suburban, last wek) mi g ht be difficult for competitors to...

Beware the bezzle T he bezzle is comin g out of the world's bi gg est money market, and a dan g er- ous si g n that is, for all of us. This the amount of money which at any one...

Q ir Nicholas Goodison, Norman Tebbit, Oand the Governor of the Bank of En g land will be pleased to hear that I now have the answer to their difficulties with the Stock Exchan...

Sir: When it comes to my copies of the Spectator, I am a sedulous custodian. Before installing the week's arrival in its protective Spectator binder, I take great pains to press...

Sir: Christopher Hawtree'S speculations about the authorship of Peterley Harvest (Books, 6 April) were wide of the mark. Richard Pennington certainly exists. In the early 1920s...

Sir: And what is wrong with Prince Charles attending Mass at the Vatican considering he would only-be returning the compliment paid by the Pope when he visited here? Your...

Sir: Colin Welch's observations (Centre- piece, 30 March) on the inherent pre- judices of dogs did not make the point that such prejudices are tolerated only if they are amusing...

Sir: Reading P. J. Kavanagh's praise of the Magnificent Davies bequests in the Nation- al Museum of Wales (Postscript, 6 April), Just after another joyful look at their...

Sir: I would like to follow what Samuel Brittan said about unemployment in his percipient review of Douglas Jay's book ('Jay's Guide', 13 April) by asking why unemployment, by...

Message to the masons Colin Welch A midst much other wisdom, Sir Ken- neth Newman has advised his Metro- politan policemen, in very moderate and balanced terms, not to join...

Ferdinand Mount Secret Gardens: The Golden Age of Children's Literature Humphrey Carpenter (Allen & Unwin £12.95) T here is a conversation still to be heard now and then which...

Francis King The Life and Work of Thomas Hardy Thomas Hardy ed. Michael Millgate (Macmillan Press £30) S ome years ago I was asked by the Times to produce obituaries of some...

Harold Acton The Travels of Lord Charlemont in Greece and Turkey, 1749 Edited by W.B. Stanford and E.J. Fino- poulos (Trigraph Limited £13.50) H appily the Society of...

Peter Levi w hen Patrick Leigh Fermor picked Edward Lear's Cretan Journal as the best book of the year in the Spectator, I was thrilled to hear of its existence. It his reached...

Stan Gebler Davies Foreign Exchange: New Travel Stories Edited by Julian Evans (Hamish Hamilton £9.95) T he pieces in this collection, with the exception of two which are...

bliophi I y, the most benign of addic- tions, can be induced just outside the cradle and expected to persist to the death-bed. The quality of the life-long influence of books...

A couple of years ago I found myself embroiled in a curious relationship with an American feminist which left me feeling exhausted. Before avid readers assume that I am about to...

Outbursts Peter Phillips rr here have been moments, glorious 1 moments, in the artistic life of a country when creative achievement has gone, as it were, berserk. I refer to...

Below par Peter Levi I t has been the kind of week when the fiction is more depressing than the news. The pleasant Scottish weather-man, jibbering and gesturing on BBC1,...

In business Taki I t seems like ages since I last flew into London. Once I had landed, however, it all turned painfully familiar. The long walk to Terminal Two; the 'How long...

A gas Jeffrey Bernard I f my father had been a major in the Waffen SS and not as he was a major in the Royal Engineers I would feel more than a little put out, but I shouldn't...

No explanations Alice Thomas Ellis W e had a very ecumenical Easter in the country with a number of people who were too young to have made up their minds yet on the matter of...

No. 1368: Hullo, sailor Set by Jaspistos: In a famous passage Sir Thomas Browne wondered what song the Sirens sang and added that it was 'not beyond conjecture'. Please supply...

B ankside P. J. Kavanagh ome time in the sixth century, before the battle of Dyrham settled the na- tives' hash, the British actually beat the Saxons, at a place called...

Jaspistos reports: Competitors were asked for a recipe for a very simple, dish in the style of a pretentious writer on cookery. Although I forgot to set a word-limit and...

Wild East Raymond Keene M uch violence is to be observed among the games of the lesser-known Rus- sians. Perhaps they believe that they must do something extraordinary in...

Wine Club Auberon Waugh T am usually reluctant to offer wines at the cheapest end of the market for fear that punters could find them even cheaper at their local cash and...