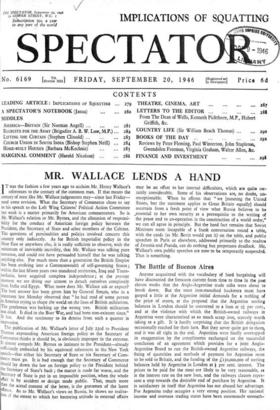 I T was the fashion a few years ago to acclaim Mr. Henry Wallace's references to the century of the common man. If that means the century of men like Mr. Wallace judgements...

The Battle of Buenos Aires

Anyone acquainted with the vocabulary of hard bargaining will have discounted the forecasts current from time to time in the past eleven weeks that the Anglo-Argentine trade...

The decision of the Cabinet to repatriate German prisoners of war at the initial rate of 15,000 a month is a step to be welcomed as far as it goes. But it is very far from...

Mr. Shinwell's quarrel with the electricity supply companies seems to be entirely of his own seeking, and it is singularly hard to see how it can serve the general good. A...

A Good Agreement with France

It is fortunately not necessary to have agreements between this country and France formally set out and signed before they can be regarded as safe. Consequently the agreement in...

The local elections held in the British zone on Sunday were only a beginning of the democratic process which is to substitute elected councils for those nominated by the...

General de Gaulle has lately been both an asset and a liability to the M.R.P., the largest party in France. On the one hand, the widespread impression that he was closer to that...

T is no longer necessary to commend the squatters on the I ground that they assert the fundamental independence of free Englishmen. That idea occurred to most observers when the...

That stand-by of the Free Church world, The British Weekly,

has new proprietors and, what is more important, will shortly have a new editor, Dr. J. A. Hutton having retired after 21 years through age and ill-health. The paper's history...

Mr. Harold Macmillan's persistence in his crusade for a new

party of progressive democrats (I hope that describes it adequately) is making rather heavy weather, though there is clearly something to be said for it. But was it accident or...

T O lecture to the German prisoners taking the educational course at the Training Centre at Wilton Park is an exhilarating ex- perience, as readers of the admirable article...

The romanticism of the Attorney-General's recent statements about the ownership

and conduct of the Press aroused general and searching comment. But what is to be said of the speech he made on housing at St. Helen's last Friday? He was drawing the usual...

What size newspapers do we want? The question is raised

very pertinently in a booklet on the newsprint question by Sir Walter Layton, who, as Chairman of the News Chronicle, and at the same time Chairman of the Rationing Committee of...

Sir James Jeans will be mourned by a much larger

public than most scientists of equal eminence, for he set himself resolutely the task of making science intelligible to the ordinary man. And in a very large measure he...

Mr. Henry Wallace was once described by a fellow-countryman , whether

justly or not, as " the soft under-belly of the New Deal. There are those who today would allot to him that role in relation to the Truman administration—though some Americans...

Those who recognise with some anxiety the complete irreplace- ability

of Mr. Bevin at the Foreign Office will be glad to know that no cause remains for the concern his recent illness occasioned. In spite of his labours at Paris, the other labours...

By SIR NORMAN ANGELL T HEpublishers of Mr. Soule's book America's Stake in Britain's Future* are to be congratulated for their effort to bring before the British public part at...

RECRUITS FOR THE ARMY

By BRIGADIER A. R. W. LOW, M.P. T HE Regular Army is short of recruits. If this shortage con- tinues, to-day our foreign policy will be weakened and our demobilisation plans...

By STEPHEN CLISSOLD N a recent issue of The Spectator Commander King-Hall rightly I drew attention to the urgent importance of making the British way of life better known and...

By the RIGHT REVEREND STEPHEN NEILL* M ANY people are aware that something very important is happening in South India concerning the re-union of the Churches, and that the...

By BARBARA McKECIINIE T HERE has been ample and dramatic evidence, since this article was first drafted, of the lengths to which homeless people in this country are prepared to...

By HAROLD NICOLSON E VEN when I was a child I did not, in so far as I can remember, enjoy dressing up. The nursery theatricals into which I was forced by my parents ceased,...

"The Skin 'of Our Teeth." By Thornton Wilder. At the Piccadilly. Ir is by the skin of our teeth, the author very plausibly asserts, that the human race escapes the consequences...

Picruits by Bermejo, El Greco, Ribera, Zurbaran, Velasquez, Murillo and Goya are included in a new Arts Council exhibition of Spanish painting, currently to be seen at the...

ON the strength of Potemkin, October, and The General Line, Eisenstein can claim for any film he makes the attention due to the work of an artist and pioneer, whose influence on...

eaders are urged to place a firm order for it with their newsagent or to take out a subscription. Subscription rates 3os. for 52 weeks, 15s. for 26 weeks. Instructions, with a...

in the Press that members of our Occupation Force in Germany, where wives go out to join them, are entitled to commandeer any house and its furniture, and expel the German...

Sts,—I am not anxious to add to your already overburdened columns on the present psychological and economic condition of Germany, but there are two points and one impression...

THE CHURCH IN GERMANY Sm,—Even a short tour of Germany cannot fail to convince a student of German affairs that the vast majority of the population remains completely ignorant...

Sot,—Mr. Michael Lindsay's letter in your issue of August 3oth prompts me to ask how the Chinese Communists square their oft-repeated concern for the execution of urgent and...

Sm,—Mr. Harold Nicolson, referring in his Marginal Comment to the recent attack on the periodicals Zvesda and Leningrad, says that he knows nothing of either Zoshchenko, who has...

SIR, —The Duchess of Atholl, in your last issue, wrote: "The Russian Army, from 1942 onwards armed mainly owing to American and British aid." My brain reels anew at this...

Sot,—A petitioning prayer of any kind is a hope put

into a form of words which takes God into account. Unless it is nonsense to say, " I hope the weather will improve for the sake of the harvest," or (should need arise), " I hope...

Sm,—The Ministry of Agriculture have set up Appeal Tribunals to deal with future cases of dispossession by War Agricultural Executive Com- mittees. Unfortunately, however, such...

SIR, —" Surely even professed "•scientists "must regard with dismay " the frequent falsification of the weather forecasts. If Miss Winckworth is at all concerned in the harvest,...

Sta,—It seems your correspondent wrote somewhat prematurely regarding the national

Day of Prayer for relief from the rain. Whether or not our prayers reached heaven or the meteorologists, they have certainly been answered, or is this just another coincidence,...

Sta,—I have read with surprise the description of the Appointments Office of the Ministry of Labour by Mr. Graham Watson in your issue of September 13th. My own experience was...

In My Garden The hybridisers have done better work than

is widely appreciated. Most of us grow the evergreen ceanothus, which flowers early, and the deciduous group which flowers late. The two classes have been crossed with excellent...

SIR,—May I briefly and amiably argue with Mr. Basil Wright? I saw, a few nights ago, his own film and the film (Zero de Conduite) which he reviews in last week's Spectator. His...

Sta,—A copy of The Spectator containing Janu.s's comments on Trollopolatry has just reached me. Perhaps Trollope-lovers may be interested in the following tale. I found myself...

Among the first of the birds to announce (both by

their absence anct presence) the arrival of autumn, are the swifts—birds, in some places, almost as fond of the towns as of the country. They come late and go early, like the...

IN the many discussions on the parlous state of the grain harvest, especially on the, danger of the ears sprouting in the sheaf, I notice that the word " stook " is much more...

• The end of summer is th' e theme of

a letter from one of our beneficent workers in Greece. "In the village (in Epirus) there is a rather pretty soft-leaved shrub svith - a flower the colour of 4ceanothus...

ago, you printed a letter about the unsatisfactory position of, and feeling of frustration among, under- graduates Whose career and studies . have . ' been interrupted by Army...

Sta,—" Sir Ernest [Simon] has always hitherto been known as a staunch Liberal." Is your memory worse than mine? I thought that Sir Ernest was a Parliamentary candidate, not many...

THIS is the second volume in the New Naturalist series of books and if the rest of the series are equally good the editors will deserve well of the public. Mr. Vesey-Fitzgerald,...

The Year of Stalingrad. By Alexander Werth. (Hamish Hamilton. 15s.) THERE was never a battle which had at once such dramatic content and such historical significance as...

Death into Life. By Olaf Staplerlon. (Methuen. 7s. 6d.) THIS book was bound to raise hopes , and then disappoint them. For it begins with death and goes on to vaster and vaster...

Over to France. By Pierre Maillaud. Translated by Francis Cowper. (Oxford University Press. 7s. 6d.) ON the minds of many who love and admire France the reading of Professor...

The English Abigail. By Dorothy Margaret Stuart. (Macmillan. 15s.) IN these days, when Abigails are either invisible or foreign, it is pleasant to be reminded that there was...

SOLUTION TO CROSSWORD No. 391

THE SPECTATOR" CROSSWORD No. 393 [A Book Token for one

guinea will be awarded to the sender of the first correct solution of this week's crossword to be opened after noon on Tuesday week, October 1st. Envelopes must be received not...

By C USTOS IT is seldom wise to take any financial announcement from South America at its face value, but this week's news from Buenos Aires is certainly calculated to rejoice...