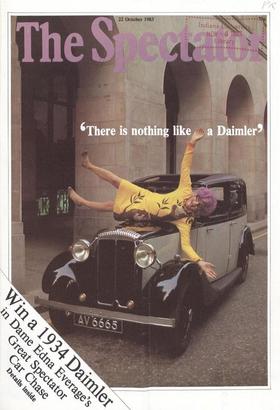 Abolish and be praised

tially admirable aim will be criticised from Nor should Mr Jenkin be suggesting that every side over the next three years. there need be few redundancies and that The opposition...

Mr Tebbit's teddy Charles Moore T can confirm that the race for the Tory leadership is on. Alas, I am not free to disclose the intensely top level sources who would have told...

Book of Golden Deedes Auberon Waugh T he Good Book is amazingly precise on the proper punishment for this sort of thing. In Deuteronomy xxii 21 we read that any bride who is...

Sam White Paris F rom the start France's involvement in I: the Iran-Iraq war was such as to make it in effect a co-belligerent on Iraq's side. This was already dangerous enough...

Out of the wilderness

Roy Kerridge I n the town centre of Cleveland, Ten- nessee,nessee, there is a square with a fountain and a little gazebo, as the people call it, a pavilion where open-air...

Reuters: the price of greed

Geoffrey Robertson and Alexander Chancellor 'It is extremely unfair to the Newspaper Proprietors Association to regard them as a lot of greedy bandits.' — Brendan Bracken,...

Richard West rr he French newspapers scarcely mentioned the resignation of Cecil Parkinson; and Frenchmen generally, so we were told by Mr Sam White in the Stan- dard, could...

Battle of the beeves

Alan Gibson or what is supposed to be a characteristic Yorkshireman, you have to turn to fiction. The best example is possi- bly Johnny Bull, of the Famous Five at Greyfriars....

The Spectator's competition to win a 1934 Daimler and many other valuable prizes starts this week on page 41.

Cakes and ale no more

Alec Guinness W ho can one hit,' he said, `if not one's friends?' As Ralph Richardson ad- vanced across the luxurious suite of his Madrid hotel I assumed it was to shake my...

Caveat emptor Jock Bruce-Gardyne S o the great bull market is over. The insti- lOtutions, drained dry by the energy and persistence of the Government broker, have no cash...

Mirror up for grabs Paul Johnson T he decision by Reed International, the paper firm, to have a public float for Mirror Group Newspapers, is ominous news in the long term for...

One hundred years ago The situation in Zululand is becoming

unintelligible. It is reported on all hands that Cetewayo, pressed by his European adviser, Mr Grant, has surrendered himself to the British Resident, and is again, therefore, a...

Sir: I don't know how old Steven Erlanger is, nor do I know anything about his physical condition: indeed, I don't even know who he is, and after reading his contribution...

Sir: It is right that any neologism should have to run the gauntlet of anything from scholarly criticism to popular ridicule. 'Outage' deserves no mercy and I can see nothing to...

Sir: I have been unable to ascertain whether or not we have a Mandela Street/Road/ Avenue in Harare yet, but, if not, I am sure we can look forward to boasting of one in the...

Sir: In your admirable columnist's televi- sion review last week, he welcomes the return of `Rumpole of the Bailey'. Whilst supporting him in these sentiments, I feel duty bound...

Sir: On the subject of dedication to Nelson Mandela, you

might want to know that the Junior Common room at New College renamed the JCR the Nelson Mandela Room. An institution further removed from the Camden Borough Council could...

Argentina and the CEGB Sir: Last month an article in the Times, 'Argentina A-Bomb fears grow', described the increasing concern at that country's involvement in nuclear...

Sir: Christopher Hitchens (`The making of martyrs', 1 October) lumps the John Birch Society in with the 'anti-Jewish dolts'. This is unfair and incorrect. The Birchers believe...

Sir: I was fascinated by Roy Kerridge's salute to that typical, yet unique, Englishman Commander Charles Drage, RN Retired (17 September). His death in July was the end of an...

The moral superiority Colin Welch Dart of the 'ineradicable' damage done to Mrs Thatcher by the Parkinson af- fair is that 'it removes a large limb of her political argument,...

What a tangled Webb J. Enoch Powell The Diary of Beatrice Webb Volume II 1892-1905 Edited by Norman and Jeanne MacKenzie (Virago 18) w hat an irony it would be if the most...

T n this plane I'm just a parcel, I No longer an individual soul; The minute of tension, the moment of take-off Is over, and all is yet in control. In this jumbo jet of latest...

Patrick Skene Catling Snow and Other Storks Antony Lambton (Quartet £6.95) ord Lambton evidently did not waste L./his time at Sandhurst, in the Hampshire Regiment and at the...

Christopher Hawtree Voices T he temptation to read Frederic Prokosch's book, sub-titled 'a memoir', by its index of 475 names should be avoided. Towards the end he confesses,...

Brocard Sewell We Believe A Priest (Progress Press Ltd 0.00) These are bad times for the Latin, or 1 Roman Catholic, Church, with a run- ning feud between progressives and...

The Burrell solution John McEwen I n 1963 the annual report of the Standing Commissions on Museums and Art Galleries described the Burrell Collec- tion as the United Kingdom...

A human scale Peter Ackroyd At First Sight ('15', Academy I, Oxford Street) This film has been directed by a young French woman, Diane Kurys, which at once makes it something...

Seasonable Peter Phillips A 11 the major concert halls in London are staging organised series of concerts during this season. Some of these run on consecutive nights, others...

Eurotrash Taki T here were more parties in New York last week than there are herpes in Studio 54. If thin g s g o on at this pace, I shall be applyin g for a liver transplant...

Nothing new Richard Ingrams T he fall from grace of Cecil Parkinson, so ruthlessly recorded by television reporters, once a g ain emphasises the point that the reason why...

Foot fault Jeffrey Bernard H ere we are again. This time the Middle- sex. St Stephens has lost its appeal for me and the King George V ward here, not to be confused with the...

God's country P. J. Kavanagh tv"ou English? You like New York?' said the taxi-driver, a thin, humorous-looking man. 'Very much,' I replied, adding, because I knew it was ex-...

Riotous assembly Raymond Keene C ivil disruption in Manila turned out to %..."be less severe than I had expected from advance reports. True, in the Makati business centre of...

No. 1292: Anagrammatical Set by Jaspistos: You are challenged to pro- duce a sense-making poem (maximum 16 lines) containing as many anagrams as pos - sible of a nine-letter...

Jaspistos reports: Competitors were asked for an imaginary extract from a book with one of these real titles: The Romance of the London Underground, Madam Madcap, The History of...

A prize of ten pounds will be awarded for the first correct solution opened on 7 November. Entries to: Crossword 630, The Spectator, 56 Doughty Street, London WC1N 2LL. n n --...

M rCecil Parkinson resigned from his post as Secretary of State for Trade and Industry after Miss Sara Keays, who is expecting his baby in January, had made a statement to the...

with Dame Edna Everage Hello readers, I tend to suspect those periwigged possums, Addison and Steele, would be Spinning in their caskets when they see the gorgeous cover of...

The first prize is a magnificent 1934 Daimler Saloon, which is illustrated on this week's cover. It is fully licensed and in excellent condition having had only two owners. The...