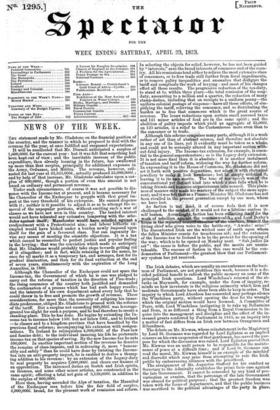 The Irish debates, which are usually an encumbrance on the

busi- ness of Parliament, are not profitless this week, because it is a de- cided political benefit to refresh the public memory on some of the principal Irish questions. Lord...

THE statement made by Mr. Gladstone on the financial position of the country, and the manner in which he proposed to deal with the revenue for the year, at once fulfilled and...

The season for charity dinners and Exeter Hall meetings draws

nigh, and the ordinary Folkmotes for the election of Parliamentary representatives begin to mingle with other meetings of an eleemo- synary or missionary character. From such...

There was a large meeting at Willis's Rooms on Wednesday, called by the Archbishop of Canterbury, for the purpose of taking measures to raise contributions towards the endowment...

Huddersfield:election took place this week; the nomination on Wednes- day, the polling on Thursday. The candidates, Mr. Starkey, a resident in the borough, and Lord Goderich,...

TnE Queen continues at Buckingham Palace ; visited every day by the Duchess of Kent. Prince Albert held a levee on behalf other Majesty, at St. James's Pa- lace, on Wednesday....

FitrareE.âLack of public news of the least interest for us has dis- tinguished the French journals this week. But we have some glimpses of the movements of the Emperor, now...

The nomination of the candidates for Athlone took place on Wednes- day. ?dr. Keogh was opposed by Mr. Norton formerly Chief Justice of Newfoundland ; supported by the Lucas pa...

The annual Convention of the Royal Burghs of Scotland was held at Edinburgh on Tuesday and Wednesday. On the motion of the Lord Provost of Edinburgh, it was unanimously agreed...

It was stated early in the week, that an adjourned meeting of Con- servative Members, two hundred in number ' had been held at the house of Lord Derby, to consult on the present...

SATURDAY. The Rouse of Lora Spent yesterday evening in debate on the Canada Clergy Reserves Bill. Important as it was, in subject matter, in treatment, and in political...

Age is not always to be measured by years, and

the perpetual youth of the great Queen of the Opera, Grisi, proves it. When we count the years of her glorious reign, we fear that it must be drawing to a close : every season...

The dulness of the London theatres, as far as anything like the pro- duction of novelty is concerned, has risen this week above the ordinary level. Macbeth, produced in...

The Paris advices of yesterday evening give a more definite

shape to " 6- unfavourable reports" from Constantinople, which had been current for two days : the last version is, that the faubourgs of Constantinople were in a state of...

STOCK EXCHANOR, FRIDAY Aprzanoon. The principal topic of conversation this week has had reference to the Budget of the Chancellor of the Exchequer ; and although it has met...

SraâGreatly admiring Mr. Gladstone's Budget as a whole, and trusting that any factious attempts to defeat its main _provisions will be resented as a treason against the...

The polling at Athkne, yesterday, was continued until noon ;

and at that hour the numbers wereâfor Keogh, 79;. Norton ' 40. Mr. Norton, then withdrew from the contest; from ten. o'clock to twelve he had only polled two votes. It is...

The great musioal performance of the week has been the

third Phil- harmonic concert, on Monday evening. It exhibited the very minimum amount of novelty ever presented at these concerts ; the only thing that was new-a solo on the...

In the matter of theatrical productions Paris is about as lively as London. At the Palais Royal, to be sure, there is a new vaudeville by MM. Cogniara fr&es, called Me Zilch&...

SUMMARY OF THE BUDGET FIGURES.

THE BUDGET OF 1853. THE fate of the propositions submitted to the House of Commons on Monday night by the Chancellor of the Exchequer will be de- cided by a variety of...

A LESSON FOR NAUGHTY SECRETARIES.

Tax moral of the sad story of Augustus Stafford at the Admiralty is, that a supercilious disregard of public opinion in official con- duct is an obsolete privilege, and that...

CHURCH OF ENGLAND IN THE COLONIES.

THE political advantages attending the extension of the Church of England in the Colonies are so manifest, that the subject may be treated entirely from a political point of...

A PROBLEM FOR THE AGRICULTURIST.

IT is not many years since agriculture was unaware that it had a mind ; and scarcely is "the agricultural mind" awakened to a con- sciousness of its own existence before it is...

THE fondness for compromise may justify the demand of the Co - - Ionial Post Reformers for an uniform postage of threepence, and the same propensity may justify the official...

ILizum relates somewhere how two Lamers and two chimney- sweeps, meeting each other in the streets, burst out with uncon- trollable laughter; each overcome by the grotesqueness...

LORENZO BEFONL . This volume appears as the autobiography of an Italian Liberal, who was engaged in one of the plots for the freedom and nation- ality of Italy, when the French...

MB. CRUICKSHANK has passed the last eighteen years of his life at Cape Coast Castle, or the settlements under its influence, engaged fore ooaside,ratde portion of the time in...

and morals ' remove this fiction very far from the monotonous character which English novels from their very number must of necessity possess. The scene of Cyrilla is laid in...

Boons. .Tournal of a Cruise among the Islands of the Western Pacifio, includ- ing the l'esjees and others inhabited by the Polynesian Negro Races, in her Majesty's ship...

EXHIBITION OF THE NEW SOCIETY OF PAINTERS IN WATER-COLOIJES. Excessive mediocrity, with the almost utter absence of remarkable pictures, has characterized the year's...

On the 15th April, in Rutland Square, Dublin, the Countess of Courtown, of a son. On the 19th, at Ealing, the Wife of Henry Blackett, Esq., of Great Marlborough Street, of a...