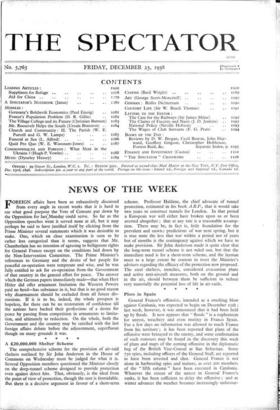 A £20,000,000 Shelter Scheme The comprehensive scheme for the provision

of air-raid shelters outlined by- Sir John Anderson in the House of Commons on Wednesday must be judged for what it is. Several Opposition members questioned the Minister...

F OREIGN affairs have been so exhaustively discussed from every angle in recent weeks that it is hard to see what good purpose the Vote of Censure put down by the Opposition for...

Plots in Spain General Franco's offensive, intended as a crushing

blow against Catalonia, was expected to begin on December r5th ; last week, however, it was announced that it had been held up by floods. It now appears that " floods " is a...

into Spain, and, in one form or another, conscripted the entire nation. Something, though not all, of the cost is shown in the deficit of £54,000,000 on the budget of...

A nice point was raised by Labour speakers in the

further debate on National Service in the House of Commons on Tuesday, when, in commenting on Mr. Ernest Brown'' statement that in the hypothetical next war more men might be...

What We Owe America In the House of Commons this

week Mr. Chamberlain stated that, after the Anglo-American trade agreement, there is not the slightest " source of difficulty or difference " with America. Mr. Chamberlain...

The Declaration of Lima Continental solidarity would seem to be

so desirable an objective for the Americas that it is not surprising that the United States delegation should have circulated to the Pan- American Conference a draft the object...

Standard Prices for Agriculture The pressure exercised on the Government

by its agricul- tural supporters, by now hardly to be distinguished from opponents, becomes increasingly stronger, and their demands increasingly ambitious. On Tuesday the...

Elections in Poland The results of the municipal elections held

in Poland last Sunday are too varied to allow any precise conclusion to be drawn ; the Government, certainly, prefers to regard them as an expression of " local " opinion and to...

Mr. Chamberlain's reply undoubtedly impressed the House. His warning to

Germany was universally welcomed, and the majority of members, even on his own side, seemed to approve his declaration that, so long as there were foreign troops in Spain and so...

Higher Pay for Postmen The postmen who bring much good

cheer to the rest of the community may this year rejoice in an improvement in their own conditions. The Civil Service Arbitration Tribunal, which has now published its findings...

In 1931, when the National Government was formed, the Under-Secretaries

The Week in Parliament Our Parliamentary Correspondent writes : Very

few of those who heard it can have shared Mr. Quintin Hogg's view that Monday's debate on foreign affairs was a waste of time. The whole electorate is concerned with the inter-...

The Miner's Safety Three years after it was appointed the

Royal Commission on Safety in Coal. Mines has reported. Even during the preparation of the Report the situation has been getting worse, and in the House of Commons in July the...

T HE public conscience is troubled, and rightly, regarding refugees. That is written in no critical spirit. It imports no suggestion of lack of sympathy on the part of either...

T HE British and American Governments appear at length to have been driven into taking more vigorous measures to protect the interests of their nationals in China. Last week the...

R EADERS of this column have always been so tolerant of the personal note in it that I think I may go so far as to wish them collectively a cheerful Christmas and a better 1939...

By PAUL EINZIG It is true that for the time being the outward form of private property had been retained—except in the case of the Jews, who are being expropriated practically...

By B. R. GILLIE N OTHING makes a Frenchman dislike the English more than the assumption that in the next war his country should provide the infantry while the English fight on...

THE \ ILLAGE COLLEGE AND ITS FUTURE

By CHRISTIAN BARMAN T HE Village College has now been established in Cambridgeshire for eight years, long enough to have turned what was an experiment into a fixed and tested...

By URSULA BRANSTON T OWARD the end of this last long summer in America's Deep South, I fetched up in a small town not far from the Mississippi. The sidewalks were even more...

CHURCH AND COMMUNITY : II. THE PARISH

By W. E. PURCELL and G. W. LAMPE The social background presupposed by the Book of Common Prayer is built up of village communities and small agricultural towns centred round...

By W. E. WOOSNAM-JONES " y SEE that they've stopped dropping bombs on one 1 another in Spain at last," said my Uncle Fred, looking up from his paper. " It says here that on...

WHAT NEXT IN THE UKRAINE ?

Commonwealth and Foreign By HUGH P. VOWLES I F asked whether Herr Hitler will attack the Soviet Union, I should answer : " Probably, provided a suitable oppor- tunity occurs."...

LAST week Egon Petri gave a recital at the Wigmore Hall, which was nearly, if not quite, sold out. It seems that the musical public has at last come to recognise in Petri an...

Scottish Contemporary Art IN Edinburgh, when the Academy has been cleared of its hardy perennials and a decent interval allowed to elapse, the Society of Scottish Artists has...

COUNTRY LIFE A Trust *Job Among its many activities, its

most beneficent activities, the National Trust now and again offers posts that make the mouth water. Details of one of these have lately been published. The Trust has come into...

THE CASE FOR THE RAILWAYS

THE CLAIMS OF FASCISTS AND NAZIS

[To the Editor of THE SPECTATOR] Sn1,—I feel sure • that most sensible people will agree with the modest claims recently put forward vigorously by a group of Italians. These...

[To the Editor of TIM SPECTATOR] SIR,—A few weeks ago I appeared before Sir John Anderson, the Minister of Health and the President of the Board of Education and submitted to...

A SETTLEMENT IN SPAIN

[To the Editor of THE SPECTATOR] SIR,—There is one point in the article " Mr. Chamberlain's Next Steps " in The Spectator dated December 16th which appears to be an unjust...

THE NAZI CENSORSHIP OUTSIDE GERMANY

[To the Editor of THE SPECTATOR.] Sm,—The article " The Nazi Censorship Outside Germany " has been read with considerable interest in this country. I do not know which...

LETTERS BETWEEN EAST AND WEST

[To the Editor of THE SPECTATOR] SIR,—In recent years it has been realised in many fields that the exchange of correspondence goes far towards promoting understanding between...

[To the Editor of THE SPECTATOR] SIR,—Regarding Mr. Boumphrey's letter in your issue for the 2nd instant, the contract for the building of the particular house shown in the...

THE WAGES OF CLUB SERVANTS

[To the Editor of THE SPECTATOR] SIR, Will you allow me to put before your readers some facts about the starvation wages paid to many unorganised workers, of whom some at least...

THE RETURN OF MEMEL

[To the Editor of THE SPECTATOR] SIR,—May I make a few remarks upon your note " The Return of Memel " in your issue of December 16th ? (t) You seem to attach undue importance...

BOOKS OF THE DAY By D. W. BROGAN To the prosperous classes in America the reign of Calvin Coolidge has naturally enough acquired a golden glow. They feel about it as...

The Romantic Ballet in Lithographs of the Time. By Cyril

Haase. By Enid McLeod. (Chatto and Windus. I2S. 6d.) NEARLY eight hundred years have passed since Heloise died in the Oratory of the Paraclete on the marshy banks of the Arduzon...

POETS MUST BE " IMPURE "

As a critic, Mr. Louis MacNeice is normal, honest, intelligent, interesting, and also well-informed. He is personal, but not partisan. He judges, and he writes, accurately and...

LADY LONDONDERRY'S life has been set against a background of truly Disraelian grandeur and authority. Of the rich and brilliant personalities who have adorned the public life of...

FORTY YEARS AFTER THIS is the personal history of a

great love affair which shook official society in Cairo from top to bottom at the turn of the century. In those days, society was exclusive, secure, and hedged-in with...

By FORREST REID Such Harmony. By Susan Goodyear. (Chatto and Windus. Ss. 6d.) Three Novels. By Sholem Asch. (Routledge. 8s. 6d.) DECEMBER is a quiet month so far as publishing...

By .CUSTOS ON the eve of the holidays Throgmorton Street has given every appearance of merely playing out time. The volume of business has been quite exiguous and the...

BY ZENO [A prize of a Book Token for one guinea will be given to the sender of the first correct solution of this week's crossword puzzle to be opened. Envelopes should be...

SOLUTION TO CROSSWORD No. 325 SOLUTION NEXT WEEK