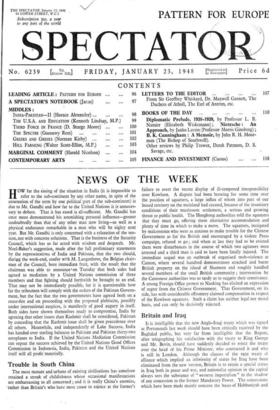 The most mature and urbane of existing civilisations has somehow retained a streak of childishness whose occasional manifestations are embarrassing to all concerned ; and it is...

It is intelligible that the new Anglo-Iraqi treaty which was signed at Portsmouth last week should have been critically received by the Baghdad public, but very far from...

H OW far the easing of the situation in India (it is impossible to refer to the sub-continent by any other name, in spite of the annexation of the term by one political part of...

For once symbolism was apt when, last Saturday, the Dutch and the Indonesian Republicans signed a truce at a session of the United Nations Committee of Good Offices held in an...

Although it is difficult to quarrel with any individual item in Mr. Harold Wilson's catalogue of British trade negotiations and objectives it is ecRally difficult to deny that...

The Children Bill, which is to be introduced and discussed in the House of Lords before it reaches the Commons, meets most of the urgent need revealed eighteen months ago by the...

I.R.O. and the Future

With approximately 1,500,000 refugees still in the world, up to a million of them in Europe, the Preparatory Commission of the Inter- national Refugee Organisation, whose fifth...

O N Tuesday Parliament reassembled, not, as non-Parliamentarians sometimes put it, for a new session, but for the resumption of the session adjourned for the Christmas Recess....

The normal British citizen attends the cinema on an average once a week—people who don't see films, the bedridden and a majority of babies being regarded for this purpose as...

In a strictly commercial sense the Tudor I aircraft does not pay. In a broader sense, as a source of useful information to constructors and operators, it might conceivably pay...

M UCH will have been said about the future of Europe in the House of Commons, particularly by Mr. Bevin and Mr. Churchill, before these lines are read. Meanwhile a great deal...

A SPECTATOR 'S NOTEBOOK TT looks as if the House

of Lords will get more than its normal share of attention this session. On Tuesday it starts towards its critical decision on the Bill, sent up from the Commons, cutting the...

Supporters of the Outram derivation of " tram " are

rallying round. "The rail haulage paths to the mines," one of them writes, "were called Outram-ways '—shortened to tramways ; hence, by a natural inference, the thing that ran...

It is as well to realise how we are governed.

I have been looking into , the number of Statutory Rules and Orders—i.e., Orders emanating from various Government Departments and having the force of law — which were issued...

Adjured to insist that Olympiad does not mean Olympian Games,

I readily comply. Even The Times, it appears, has spoken of the King opening the fourteenth Olympiad. An Olympiad was (and nothing has happened to give it any other...

Mr. Mackenzie King, I read in the Evening Standard, if

he stays in office till April 21st, will have been a Prime Minister longer than any man in the history of the Commonwealth, for "he will beat Sir Horace Walpole's record of zo...

It is all very well to have expectation about railway

improvements excited by two distinguished railway officials, but when you realise that they are only voicing their dreams we are left very much where we were. Everyone will...

A lady who kept two cows to provide milk for

her household found that on occasions she had a surplus. Being conscientious by nature, she wrote to the Ministry of Food to ask how she should dispose of it. The answer she...

I hope that the pilgrimage of M. Trygve Lie round

Europe in search for a site for the next session of the United Nations Assembly is little more than a formality. For by every criterion that can be applied Geneva has claims...

By HORACE ALEXANDER New Delhi. T T is commonly asserted that the Punjab troubles have been I caused by the partition of the Province. But it is not certain that the trouble...

THE U.S.A. AND EDUCATION

By KENNETH LINDSAY, M.P. N one of his recent messages to Congress President Truman I reiterated his policy of federal aid to education, because the education system is facing a...

By D. STURGE MOORE The changes wrought in France during the past decade are perhaps more profound than in any other country. Their implications have certainly not yet been...

By GORONWY REES SPECTRE is haunting Europe." The words are more A true today than they were when two hopeful young men wrote them almost exactly one hundred years ago. Today...

By NORMAN KIRBY T HERE is no such animal as "the average Greek." The only thing all Greeks have in common is their sturdy individualism which makes them all different. This...

By WALTER SCOTT-ELLIOT, M.P. T HE greater part of our home-grown mutton and beef comes from the hill farms of Scotland, Northern England and Wales. Ex- cept in the Scottish...

By' HAROLD NICOLSON AM always fascinated by the rise and fall of social conventions. I New tides of etiquette succeed each other every fifty years, and what to one generation...

EXHIBITION THIS exhibition, organised by the Arts Council of Great Britain and the Society for Cultural Relations with the U.S.S.R., is of rather more specialised interest than...

Les Etoiles de la Danse. (Adelphi.) E'rorus DE LA DANSE, however brilliant, without ballet, without decor, without orchestra, are stars fallen out of their firmament. They have...

A mourtrumv of exhibitions reduces criticism to the nature of a railway . timetable. First, at Gimpel's, two Polish painters are showing: Marek and Marian. The latter is young...

THE two weeks' season of the winter Promenade Concerts, which

ended on January 17th, was well placed at a time when other orchestral concerts were rare and the school holidays suitably reduced the average age of the audience. I was struck...

Snt, — There was a time when The Spectator held aloft the torch of freedom, and freedom is the real issue between the doctors and the State. Changes are necessary, and advance...

Snt,—I had the honour of succeeding Sir Arthur fforde, at

an interval of something over a decade, in the School House, Rugby, and of following the same profession of a City solicitor. While my views on Sir Arthur's appointment as...

Sta,—There can be no doubt that, as Janus observed in your issue of January 9th, a growing tradition that the prize jobs will go to outsiders would have a very depressing effect...

. THE AMERICAN CONTRIBUTION Sta,—Mr. Gunthei Stein's admirable article Happy America in your issue of January 16th presents a clear and concise picture, such as has not...

THE DIVINITY OF CHRIST

Sra,—In his statement that ," of all prophets whn have claimed divine attributes, Jesus was the least concerned to persuade His followers to believe any special proposition...

Snt,—As a doctor, I thank you for the very fair

editorial on this subject in your issue of January 16th, but feel that some comment is called for. Is it really unreasonable that we should ask that a final appeal against...

Snt,—Mr. Hargrave, in your issue of January 16th, seeks to excuse present conditions in Eastern Europe by telling us that, except in Czechoslovakia, political freedom was...

Sm, — Mr. L. C. Lloyd's article is most interesting. In the R.A.F. in the Middle East between 1942 and 1944, and-particularly in the Western Desert where reading matter of any...

In the Garden In criticism of a controversy on the

respective merits of planting or transplanting in autumn or spring a nurseryman who bears a name famous in horticulture sends me these words of wisdom: "The facts are that,...

Sns,—As Mr. Peacock shows in his Killing a County, the arguments against the obliteration of Herefordshire are twofold—those based on reason and those based on emotion. With the...

The Happy Craftsman Most people, as Horace and doubtless others

have pointed out, desire to swap occupations with someone else. Now I was talking with It village blacksmith, who is a born artist, sprung of a long line of artists, and I said...

Sm,—In seeking to correct Strix, Mr. J. W. Potter has himself fallen into error. New Year's Day for the Commissioners of Inland Revenue

Rivers in Flood When I hear of the rising of

rivers and the threat of flooding, I think always of one particular scene on the banks of the Wye. This lovely river swells much more quickly than most. It can achieve, say, six...

THE plan to Make Hatfield and Welwyn Garden City into what is to be virtually one township has a satiric emphasis in the ears of some residents. There was once a signpost...

SIR, —Does not the infallible Mr. Janus slip up when he acquiesces in the dictum of the smart man of the Post Office that the British Parlia- ment met at Oxford either before or...

In cutting up a fallen elm, I fmd that the growth on the south-east side was twice or even three times as wide as on the north-west, so that the centre of the annual rings was...

Stu,—I hope that Mr. Harold Nicolson will answer the interesting questions put by Mr. Sykes about M. Queval's research into English love affairs. May I be allowed to add one...

Nietzsche : An Approach, By Janko Lavrin. (Methuen. 7s. 6d.) Nansens •is not decidedly a philosopher nor decidedly a poet, and neither his poetry nor his philosophy was adequate...

The Small Policy of the Great AT a time when people divert themselves by trying to rehabilitate the munichois it is important that an eminent historian who is at once a lucid...

Lewis Carroll. By Florence Becker Lennon. (Cassell. 15s.) Booxs which we read for the first time in childhood are peculiarly dear to us. They become a part of our...

THE subject of this intimate memoir was almost entirely unknown to the public. His name never appeared in the newspapers, he took no part in ecclesiastical politics, and he held...

MR. GODFREY BLUNDEN, we are told, " was resident in Moscow in 1942 and part of 1943," and, as the action of his novel occurs within that place and period, it has a topical...

Alexander of Macedon : The Journey to World's End. By Harold Lamb. (Robert Hale. 15s.) A MODERN interpretation of the life of Alexander the Great is long overdue, and Mr. Harold...

SOLUTION TO CROSSWORD No. 459

THE SPECTATOR " CROSSWORD No. 461 [A Book Token for

one guinea will be awarded to the sender of the first correct solution of this week's crossword to be opened after noon on Tue,day week February 3rd. Envelopes must be received...

Maurice Baring. A Postscript with Some Letters and Verse. By

Laura Lovat. (Hollis and Carter. 10s. 6d.) - LAURA, LADY LOVAT, in whose house in Scotland Maurice Baring lived from 1940 until his death from paralysis agitans just over two-...

THIS yearbook is the first of a series of annual

volumes to be pro- duced by the United Nations Department of Public Information. With nearly a thousand pages it is extremely comprehensive, in- cluding not only the activities...

Dark Legend : A Study in Murder. By Frederic Wertham,

M.D. (Gollancz. 6s.) Dark Legend is a psycho-analytical study, by the Senior Psychiatrist of the New York Department of Hospitals, of a case of matricide. Like Orestes, Gino, a...