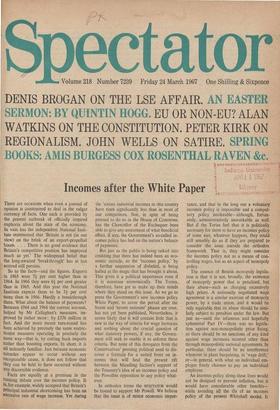 Incomes after the White Paper

There are occasions when even a journal of opinion is constrained to deal in the vulgar currency of facts. One such is provided by the present outbreak of officially inspired...

So the Government is to go ahead and buy a further forty Fl 11 aircraft after all. Why? The official reason appears to be that they will provide a useful figleaf to cover the...

It is never pleasant to watch a privileged group abusing its good fortune. When at the same time it poses as an oppressed minority, the spectacle becomes absurd. Many of the...

A good week for drama at sea: Sir Francis Chichester was sighted off the southern coast of Chile and sailed safely round the Horn while a blanket of oil from the leaking tanker...

POLITICAL COMMENTARY ALAN WATKINS 'The Labour Government,' said Ramsay Mac- Donald in 1924, 'will go out if it be defeated upon substantial issues, issues of principle, issues...

CHRISTOPHER HOLLIS While lesser statesmen bend a quivering knee Before the menace of the Whip's dominion, Mad dogs and Englishmen, we're glad to see, State, unabashed, their...

THE LSE AFFAIR DENIS BROGAN All the brouhaha over the students' revolt in the LSE or (as one would think from some com- mentaries) the revolt of the governors against their...

AMERICA MURRAY KEMPTON Washington—Could there be a better indication of the national inanition than that, since December, the Congress should have been occupied by the...

RUSSIA DEV MURARKA Moscow—The Russians are bewildered. There was Washington, crying out with every drop of a bomb for a gesture from Hanoi, and protesting its love of peace and...

THE BRITISH ELKA SCHRIJVER Amsterdanz—Bef ore the First World War a story did the rounds in Europe of an English- man, forced to postpone a trip to the Continent because of...

Living with the brontosaurus

REGIONALISM PETER KIRK, MP The results of the recent by-elections have, as the pundits have not hesitated to point out, really satisfied none of the established parties. What...

J. W. M. THOMPSON A good judge said the other day : 'Most academics are intellectually anti-Labour, but emotionally anti-Tory.' Certainly, among the many causes which one could...

THE PRESS DONALD McLACHLAN Over two months have passed since, thanks to the Economist Intelligence Unit Report, the portholes were opened in the good ship Fleet Street, and...

TELEVISION STUART HOOD Occasionally the complex business of planning a television schedule produces happy chance constellations of programmes. There was one last week when on...

PERSONAL COLUMN QUINTIN HOGG The need for ecumenism springs neither from inclination nor Christian charity but from the stark reality of the crisis threatening the con- tinued...

From the 'Spectator.' 23 March 1867—A very singular rumour of a new design entertained by the Emperor of the French has obtained currency this week. It is stated that Napoleon...

Poet and pedant SPRING BOOKS I

ANTHONY BURGESS Frant is the first station out of Tunbridge Wells on the line to Hastings. I've never in- quired into the etymology of the name. All I know is that, should...

KINGSLEY AMIS 'That slimy tune,' I said, and got a laugh, In the middle of old Franck's D minor thing: The dotted-rhythm clarinet motif. Not always slimy. I thought, at...

Ways and means NEVILLE BRAYBROOKE Tree Without Roots by Syed WaIiullah (Chatto and Windus 21s) Play the Ball by Peter Forster (Eyre and Spottiswoode 30s) The Power of Sergeant...

SIMON RAVEN 'Ovid,' my housemaster used to say, 'was like a dirty - minded little boy who writes things on lavatory walls. No passion, no reverence. Just sneers, jeers and...

ANTONY FLEW This, although the fact is not indicated directly on the title page, is planned as the first of two volumes. It is, as one would expect, very frank. Not only does...

Poet of a cold climate

M. L. ROSENTHAL Wallace Stevens was a tall, overweight Keats with normal temperature and an important position in an insurance firm. For a long time his primary energies went...

The Montgomery Legend by R. W. Thompson (Allen and Unwin

32s) Blunt hatchet ALAN CLARK The Montgomery Legend by R. W. Thompson (Allen and Unwin 32s) This cannot have been a very arduous book to write. All the research has already...

Clear, white light DAVID REES — He is the king of liars. He is the frankest truthsayer. He is the august companion with whom one walks with the gods. He is also in league with...

CHRISTOPHER HIBBERT The emotive title of this book arouses both revulsion and nostalgia. The dispatch of gun- boats all over the late-nineteenth-century world as a means of...

-r PATRICK ANDERSON The chance smell of hawthorn in a middle- aged man's nose brings back, with stabbing clarity, le paradis des amours enfantins. The arrival of a new book on...

ART BRYAN ROBERTSON It is agreeable to report that Howard Hodg- kin's show at Tooth's, which closes this week, is practically sold out and it couldn't happen to a nicer show....

PENELOPE HOUSTON Antonioni at the London Pavilion. Even a couple of years ago, this would have seemed as far-fetched as, let's say, the Beatles at Covent Garden. Now it's a...

Diary of a Madman (Duchess)

THEATRE Civil Service Willies HILARY SPURLING Nicol Williamson is one of those actors who, as a hardened professional once said of Davy Garrick, could act a gridiron and...

NICHOLAS DAVENPORT On this long weekend it behoves all good investors to re-examine their position in the stock markets. They have fared far better than they could have...

CUSTOS The initial response to the cut of # per cent in Bank rate to 6 per cent was a slight fall in long-dated British government bonds, indica- ting an over-bought position,...

JOHN BULL To hook oneself to the earnings of the stars: the £71- million bid by EMI for the Grade Organisation shows how tempting that is. Two brothers, Mr Leslie Grade and Mr...

CONSUMING INTEREST LESLIE ADRIAN It is sometimes said that the English are the only nation who will discuss food while eating it. Perhaps that is because food, like the...

Sir: I read Simon Raven's letter to his son without being as much offended by it as some of your correspondents seem to be. As a grandmother I would like to make a few...

Sir: Dear Uncle Simon You were always a bright and

even a brilliant rogue. Charming, engaging, you enjoyed your elfin stance, enfant terrible: a veritable Rumpelteazer of the Lower Sixth in- tellectuals, you romped your way...

Sir: Judging by his letter (3 March), Mr Green- berg has fallen into the common error that none but Jews were done to death in the Nazi concen- tration camps in Poland. As Sarah...

Sir: As regular subscribers to the SPECTATOR we lament the

abundant condemnation of 'Raven and Son.' For we think that we must be two of a number of readers aged fifteen who keenly appre- ciated the article by Simon Raven in your issue...

Dear young Raven, I am writing to cheer you up, as I fear you may have found father's letter horribly depressing. I'm sure he means well, and in some respects I agree with him,...

Sir: I was surprised to see that none of the

letters to you (17 March) considered the subject-matter from the point of view of the son when he grows up, assuming he had taken his father's advice. As a companion, be would...

Sir: The furious reaction of middle-class moralists to Simon Raven's

amusing article was wholly pre- dictable. But I must confess that I was surprised that none of the SPECTATOR'S high-minded readers thought fit to comment on the one really...

Sir: I wonder what effect Simon Raven's letter to his

son would have had on me were I fifteen. I think his pervading cynicism would have increased considerably the instability of adolescence, for he has replaced the petty...

Sir: With reference to J. W. M. Thompson's 'Spectator's Notebook' in your 10 March issue, Nelson lost the sight of his right eye at the siege of Calvi, which was some years...

Sir: Surely Mr Casey's letter (17 March) in fact con- tains Mr Hutber's original complaint that the expert report was interfered with by paid officials before being seen by...

Sir: As former counsel for Ethiopia and Liberia in the .South West Africa case before the International Court of Justice, may I call attention to certain considerations...

JOHN WELLS 'In short we seek that Pox Americana That all the Freedom-Loving world desires.' MacBird! Act II Sc 2 It is now almost seven years since Beyond the Fringe opened...

Sir: Mr Davenport and 'Custos' have served me e ery well in the past by their financial advice. But Mr Davenport now seems to be taking more interest in the Chancellor's...