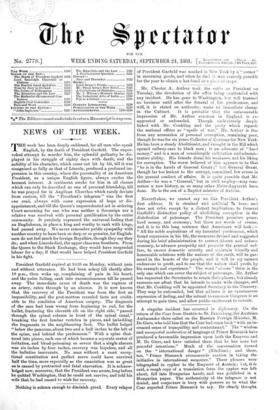 T HE week has been deeply saddened, for all men who speak English, by the death of President Garfield. The unpro- voked attempt to murder him, the splendid gallantry he dis-...

It is strained and artificial ill tone, and does not refer, except by a distant implication, to General Garfield's distinctive policy of abolishing corruption in the...

A singular incident has occurred in diplomacy. On the return

of the Czar from Dantzic to St. Petersburg, the Austrian.. Ambassador there called on the Russian Foreign Minister, M. De Giers, who told him that the Czar had comeback" with an...

Nothing is solemn enough to diminish greed. Every relapse

of President Garfield was marked in New York by a " corner " in mourning goods, and when he died it was scarcely possible for the poor to obtain a hat-band or a pie c e of crape.

Mr. Chester A. Arthur took the oaths as President on

Tuesday, the devolution of the office being unattended with any incident. He has gone to Washington, but will transact no business until after the funeral of his predecessor,...

President Garfield expired at 10.35 on Monday, without pain and

without utterance. He had been asleep till shortly after 10 p.m., then woke up, complaining of pain in his heart, and the pulse failing, sank into unconsciousness till he passed...

Mr. J. Ferguson, leader of the Irish Home-rulers of Glasgow,

Sir Michael Hicks-Beach made a speech to his constituents at

Winchcombe on Wednesday, which, though moderate in phrase, contained some very decided opinions. He admitted that the Irish Land Act was deemed essential by men of more than one...

It is admitted that the Emperors of Russia and Austria

are to meet very soon, if they can find a place tolerably free from peril of dynamite. It is supposed, therefore, that the Triple Alliance is to be renewed, and the various...

The English and French papers, and more especially the Republique

Francaise, continue their cry for the disbandment of the Egyptian Army. The new Premier, Cherif Pasha, is about to concede certain recommendations of the Military...

The Shanghai correspondent of the Times forwards a piece of

intelligence of considerable importance. General Tso, the con- queror of the Panthays and of Kashgar, is, as our readers know, in Pekin, supporting the policy known as that of...

The situation in Tunis is becoming a little clearer. Besides

Nothing looks so sensible as a sinking fund to pay

off a loan year by year, and nothing succeeds so badly. The burden always proves too heavy at first. The Spanish Government, for instance, according to the Times, has now, out...

The opinion we have often expressed, that the dislike to

agri- cultural labour as a hopeless labour is growing throughout the world, and will modify all tenures, receives this week some curious confirmation in an unexpected quarter. A...

Mr. Bradlaugh has failed to punish Mr. Newdegate for insti-

gating the actions to recover penalties from him for voting in the House of Commons. That Mr. Newdegate guaranteed the nominal prosecutor in those actions is not denied, and the...

Modern engineers think they have carried the art of surveying

to very great perfection, but a good deal of it must have been known in ancient times. No road is so imperishable as a Roman road, which indicates that the engineers not only...

London has been amused, and a little frightened, by a

The Member for East Gloucestershire may be right in saying

England cannot become a huge market-garden, but we suppose he does not want to discourage any profitable cultivation. We may look, therefore, to his party to aid next Session in...

It should not be forgotten, in studying the question of

re- grating, that behind the Syndicates who are actually operating stand armies of small speculators who follow them. The Ameri- can correspondents say the whole West is alive...

I T is not wise to set down Lord Randolph Churchill as merely a self-sufficient cadet, intent on pushing himself to the front by any and every means, with no political con-...

THE DEATH OF PRESIDENT GARFIELD. T HE death of President Garfield, though more or less ex- pected for the last few days, yet came upon the English world with something of a...

T .1 ET us see precisely where we are in this serious matter, for, as usual at the beginning of any extensive agitation, the facts are partly obscured by talk about them. As we...

TRIAL BY JURY IN IRELAND.

T HE broad result of the evidence taken by the Lords' Committee on the Irish Jury Laws, is that over a large part of Ireland there exists no machinery for protecting society...

THE CRIME OF KIDNAPPING.

• T HE story of the abduction of the Rev. Mr. Kennard cannot fail to have a disquieting effect, suggesting as it does the existence of a new kind of danger, of which most people...

T HE letter from "R. T. D." which we printed last week asks a very fair question. You are not satisfied, the writer says, with the Purchas and Ridsdale judgments,—that is to...

The group of Churches which are entitled to be classed under the general designation of "Wesleyan," though chronologically the latest of the great divisions of Protestantism,...

T HE incident in the Kennard kidnapping case which has naturally excited most attention, is Mr. Kennard's failure to obtain any help from the bystanders. He was driven through a...

T N the published comments on the character and abilities of the late Mr. Erasmus Darwin, the subject of the relation of pain—which includes uneasiness—to capacity of work, has...

"JOHN 1NGLESANT." [To THE EDITOR OF THE "SPECTATOR.") SIR, — As a rule, I consider it most undesirable that an author should trouble the editor of a literary periodical with...

[To THE EDITOR OF THE "SPECTATOR.") SIR,—As you have made no editorial comment on the letter signed "R. T. D." in your last issue, perhaps you will allow another of your readers...

LORD BRAYE'S POEMS.* Ma. PALEY has done, we think, an ill-service to his friend. Lord Braye had published two or three volumes of verse, which attracted as much notice and...

[To THE EDITOR OF THE "SPECTATOR."] you kindly allow a working-man to ask the follow- ing question ? Last week, I dreamt that a book was handed to me. Inside this book I found a...

Mn. GREG takes for the subject of his story—though Ivy is rather a study of character than a story—a very difficult Ethert Glynne is made acquainted with a terrible secret in...

A CYCLOP2EDIA OF STATISTICS.* MRS. BREWER has undertaken a most

laborious and praiseworthy task. There is no publication in existence equal to Dr. Kolb's Handbook of Comparative Statistics, for the range and corn- * The Condition of...

MR. JOHN WILSON'S HISTORIC STUDIES.* THE study of history is

the most difficult of all the studies which one can undertake. The phenomena are so complex, so- many causes from different spheres unite to produce a blended' effect, that it...

THE INDUSTRIAL ARTS OF INDIA.*

Tnis book, which, to the extent of nearly two-thirds, is a repub- lication, with important additions, of Dr. Birdwood's Handbook to the Indian Court at the International...

FIJI AS A COLONY.*

THERE is no literary value whatever in this book. The author , Mr. John Horne, though he is Director of Woods and Forests in the Mauritius, and publishes by request of Sir...

The Abbot's Farm. By H. Tanner. (Macmillan end Co.)—Quite worth

reading, if only as an instructive, and interesting story of farm work and farm troubles. Perhaps farmers and agricultural chemists will discover not a few" fads" and fancies in...

A Little Child's Monument. By the Hon. Roden Noel. (C.

Kegan Paul and Co.)—A. book that expresses throughout strong personal feeling is, no more than a book of devotion, a fit subject for criti- cism. The gift of verse is naturally...

American Farming and Food. By Fiulay Dun. (Longmans.)— The contents

of this volume have been, for the most part, already published in the columns of the Times, to which the author contri- buted a series of letters in 1879 and the following year....

Six Months in Mecca. By T. F. Keane. (Tinsley Brothers.)—Mr. Keane followed the example of Burckhardt and of Captain Burton, and, by professing Mahomraedanism, found his way...

Contributions to Military and State Medicine. By John Martin Volunie

I. (J. and A. Chnrchill.)—This volume consists of two parts, of which the more important, or anyhow the more interest- ing, to the general reader, is that which has to do with...

The Essential Characteristics of the Romantic and Classical Styles. By

Pastoral Days; or, Memories of a Yew-England Year. By W.

Hamilton Gibson. (Chatto and Windus.)—This is a book of pretty descriptions of New-England scenery, as it appears through the cycle of the seasons. An English reader cannot...

An Eastern Afterglow ; or, Present Aspects of Sacred Scenery.

By W. S. Wood. (Deighton and Bell ; Bell and Sons.)—There is always something fresh to be gathered by intelligent and well-informed observers from Eastern travel. Mr. Wood does...