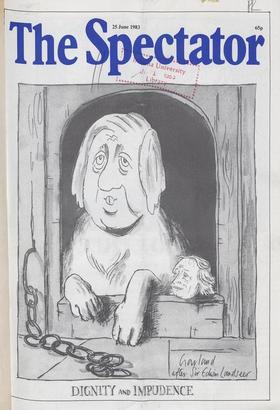 The road to purgatory

T here was an air of déjà vu about last week's important Central Committee plenum in Moscow. An ailing and elderly Mr Andropov shuffled to the rostrum to deliver a long and...

T hadn't realised until I read the News of 1 the World last Sunday that we still have an official hangman, and a deeply frustrated one at that. Mr Harry Allen, who carried out...

Problems of Merseyside Auberon Waugh O ne of Mrs Thatcher's most enlightened actions in her' second administration 4.1 0 well prove to be the decision not to have a Cabinet...

Colin Welch O f the rising Mr Kinnock we all have a strong if superficial impression. We all know him to be Welsh, sharp, humorous, lowly in origin if not in ambition, a bit of...

A face-lift for Labour?

Michael White T en days after the election a neighbour in the unemployed actors' belt of West London arrived with a curious story. His son, aged 13, had just decided to join...

Paul Johnson W riting in the Times on Monday, the most sensible of the Labour leaders, Gerald Kaufman, noted sombrely: 'Among all the challenges the Labour Party faces as it...

Washington It is the custom of the American press to cover English affairs as if they were something quaint and Lilliputian. Royal events get an awful lot of notice, as do off-...

Charles Glass Beirut T he man from Fateh told us that the mutiny against the leadership of Yasser Arafat was over. The rebels, he told us con- fidently as he leaned back on...

Lord Carnarvon made a very sensible speech on agricultural depression on Tuesday at Newbury, in which he deprecated the disposition to rely on Government for help in relation to...

Timothy Garton Ash Czestochowa T hey have come as pilgrims from all over Poland, marching softly through the night. Now at last they are massed on the meadow before the...

Richard West O ne of the harshest attacks I have ever read on the people who now govern South Africa was published in 1930 under the title Caliban in Africa. The author i...

Harry Eyres T he Sunday before last, at Queen's, Jimmy Connors was blasting John McEnroe out of existence. The familiar voice from the commentary box, as mature and mellow as...

r oomm.....mmm I INTRODUCTORY OFFER I

Sir: Does Simon Jenkins really expect us to find his

reasons for the sinking of the Relgrano credible (11 June)? He is naive if he does. Regardless of all the debate sur- r ounding Francis Pym and the Peruvian Peace plan, two...

Sir: Is it not time to sink the whole Belgrano

Sir: While John McEwen's art criticism is generally sounder and more consistent than most — his recent piece on Richard Long was excellent — I believe his reading of the Royal...

Sir: A letter (11 June) from John Cole's on- ly known fan, and just when we were hop- ing the BBC had begun to get the message — how very unfortunate! Richard Ingrams is of...

Sir: Mr Bruce Anderson is of course welcome to review a book in terms of per- sonal animus and indeed to tangle with me, if he thinks that altogether wise (18 June). But he must...

Caroline Dawnay Kings and Queens Eleanor and Herbert Farjeon (Dent £5.95) M emories of being read to as a child are always wintry ones. 'Salad Days' and The King and I' roared...

Francis King 0, How The Wheel Becomes It! Anthony Powell (Heinemann £6.95) T his is a rum title for a rum novel. Unlike such other Anthony Powell titles as Afternoon Men,...

A. N. Wilson Hymns Ancient & Modern New Standard 'The chief appeal of hymns is to the heart. They do not have to be great poetry to have great effect. Sung to a good tune,...

Gavin Stamp The Image of the Architect Andrew Saint (Yale £9.95) A chitects seldom lead very thrilling lives, so it is perhaps remarkable that members of the profession have...

In the dark Peter Ackroyd The Year of Living Dangerously ('PG', selected cinemas) T t begins with the shadows of demons mov- ing across a cloth; they turn out to be pup-...

Unrivalled Giles Gordon Inner Voices (National: Lyttelton) A Moon for the Misbegotten (Riverside) The Rivals (National: Olivier) Portrait of the Artist as a Young Dog (Kings...

John McEwen will be back next week.

Fighting fit Taki Munich T his is a city that was built for the arts; a centre of European culture, wit h some of the finest rococo and baroque architecture in the world....

Richard Ingrains will resume his column in two weeks.

Other things P. J. Kavanagh It will not have escaped the reader's attention that this column has so far avoided mentioning the election. (This col- umn does have a reader...

Drip feed Jeffrey Bernard I Was sorry I couldn't address you last week but I wasn't feeling very well. My ma n who dealt with my chest implied that I might have lung cancer and...

No. 1275: Disyllables Set by Jaspistos: You are invited to write a poem of from four to eight lines consisting entirely of two-syllable (to the ear) words. Entries to...

Jaspistos reports: Competitors were asked for a short detective story in which Sherlock Holmes reaches a typically brilliant solution of the crime. I did say 'crime', so Basil...

A t the postponed European Community summit meeting in Stuttgart, the Prime Minister expressed satisfaction at the agree- ment to give Britain a refund of £450 million on its...

The Spectator. Registered as a Newspaper at the GPO, London.