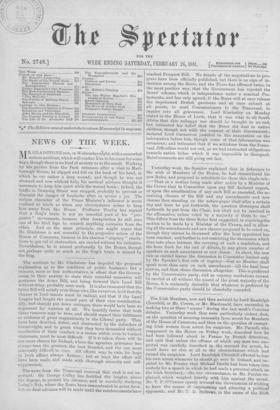 Yesterday week, the Speaker explained that in deference to the

wish of Members of the House, he had reconsidered his new Rules, and proposed to substitute for them this single rule: —" That on a motion being made after notice by a Minister...

The Irish Members, now and then assisted by Lord Randolph

Churchill, or Mr. Cowen, or Mr. Macdonald, have succeeded in making two or three "scenes" during the last week's Coercion debates. Yesterday week they were particularly violent,...

*** The Editors cannot wndertake to return Manuscript in awy

The news from the Transvaal received this week is not

im- portant. Sir George Colley has fortified the heights above the Ingogo, to protect his advance, and is carefully studying Laing's Nek, where the Boers have concentrated in...

The accident to Mr. Gladstone has impeded the proposed oxplanation

as to the condition of public business; but a rumour, more or less authoritative, is afloat that the Govern- ment, in their anxiety to state their remedial measures, will...

M R. GLAD STONE met, on Wednesday nIght, with a somewhat serious accident, which will confine him to his room for some days, though there is no kind of anxiety as to the result....

At twelve o'clock, the amendments remaining were all voted on

in succession, so far as they were in order, and Dr, Phi,yfair reported the Bill to the House, the majority for .so doing being 3:30 (277 against 47). The Irish Members then...

The difficulty in this speech, as in all M. Gambetta's

recent- epeeeltes, is to discover whether Ire is expressing his own , opinions, or only throwing back those of the electors. Ap- parently, he says he will not fight until the...

On Monday, at midnight, the debate in Committee was to

cease, under the operation of the Urgency Rule, and, on the whole, the discussion was a good deal less violent, the chief question being as to the duration of the coercive...

On the question of :excluding women and minors from the

operation of the Bill, the Irish Members became still more ferocious. Mr. Dawson said that he spoke as a husband, and that if any one came to lay his hand upon his wife, ho...

M. Gambetta made a very striking speech on Monday, apropos

of a question whether the Government had sent arms to Greece. They had not, but hints were thrown out in the debate about the "occult Government" of France, upon which M....

ington Moved the urgency resolution as to ths Report on the Coercion Bill, fixing seven o'clock as the time at which all further amendments and new Clauses must be voted upon...

At Clara, in King's County, on Sunday, Mr. Parnell made

a speech which, like all he has recently done, will cool down the Irish enthusiasm which he has somehow mauaged to excite. He had an assembly of some 7,000 people to speak to,...

The detailed account of the United States' census reveals some

at Cambridge was carried on Thursday by a majority so vast, as to suggest that the distaete for the higher education of women has almost disappeared, even among the Con-...

upon the military value of Canclahar, which he is anxious to evacuate To occupy a point so far removed beyond our frontier would be a serious financial burden, even in times of...

We think that among well-informed men the impression that . war

between Greece and Turkey is unavoidable deepens rapidly. The Ambassadors are now all present in Constantinople, but the Sultan shows no sign of giving way. There is much talk...

The House of Lords ou Tuesday had a discussion, raised

by Lord Dunra,ven, on the policy of opening museums, picture- galleries, and places of quiet amusement to the working- classes on Sundays, Lord Shaftesbury opposing it with an...

The Standard publishes a curious paper upon the policy of

the Transvaal Boers. The writer, who evidently knows his subject thoroughly, and does not sympathise with the Boers, declares that the great and fertile region between the...

Prince Bismarck has broken another Minister. This time it is

Count Eulenburg, the Prussian Home Secretary. The un- lucky official has, it is said, not heartily supported all the Premier's plans, and was even willing to allow the Prus-...

MR. PARNELL'S LEADERSHIP. W E have always tried to look at Mr. Parnell's political performances with as much impartiality as men who have formed a strong judgment against the...

THE DEATH OF THE FOURTH PARTY.

T HAT odd little creature, the Fourth Party, is said to be dead. It is unfortunate that Thackeray is no longer with us, to sing its requiem, for he alone could have done it with...

THE ESTABLISHED CHURCH AND SACERDOTALISM.

T HE letter from Sir Edward Strachey which we publish in another column, presents a view of the attitude which the State ought to take in relation to Ritualism which is, we...

T HERE is a weakness somewhere in Prince 'Bismarck. If he is to be judged solely by his career, there never was a man so strong. Be has attempted the most terrible under-...

T HE Election for East Cumberland comes off to-day, and nothing we can say will, therefore, have the least effect on the result, but we wish before the decision is known to...

THE BOROUGH OF SANDWICH.

R ASH as the statement may appear, we will venture to say thst in the matter of electoral corruption we have at length touched bottom. There may be other boroughs as corrupt as...

T HERE is something at once soothing and full of instruc- tion in the word we have chosen for our title, as a descrip- tion of those who have finished their life in this world....

SCARCELY any of the solid investments, indeed w Stocks of the great English Railways. Almost everything, it measure his character by his sympathies, we must take them as is...

I N the Daily News of Monday we read as follows :—" On Wednesday, the .Bishop of Exeter will receive the clergy of his diocese for a day of retirement and devotion.' The invita-...

RITUALISM AND TOLERATION. fT0 TRH EDITOR OF THE " SPEOTAT011.1 SIR,—The claim for toleration of the Ritualists would be tenable, if the Church of England were a peculium of...

THE PENALTIES OF OPINION IN FRANCE.

[TO VIE EDITOR OF THE “SFECTIITOR.”] SIR,—The accompanying letter from a friend in Paris, which I have translated, may interest and instruct some Irish M.P.'s- eager for the...

THE NONCONFORMISTS AND THE WRANGLERS.

[To TRH EDITOR OF TRH "SPECTATOR'] S112,—Will you kindly allow me to correct a mistake which occurs in the number of the Spectator for February 12th. It is there stated that the...

[To TER EDITOR OF TRH " SPROTATOR.1 SIR,—A popular edition of my "Life of Alexander Duff, D.D., LL.D.," has been issued by the publishers, Messrs. Hodder and Stoughton. The work...

ABBE MARTIN AND THE RITUALISTS.

[TO TUE EDITOR OF THE “SPROTATOR."1 • Sm„—In your issue of February 5th, you have published a review of my book on "Anglican-Ritualism," on which I hope that I shall be...

THE POPULAR FEELING IN IRELAND. [To TRH EDITOR OF TRH

"SPECTATOR.] SIR,—I think Mr. Hayes' letter, in your issue of the 19th inst., is incorrect and misleading. The Land League meets sup- port in every part of Ireland, and embraces...

MR. MILLAIS' PAINTING.* This exhibition of some of the most characteristic works of one of our greatest painters is not only interesting from the intrin- sic value of the...

IN fiercest heat of Indian June, I rode . Across an arid waste of burning sand, At mid-day ; all around. the lonely land Seemed. desert, and in shrunken channel flowed The river...

MR. BAGEHOT'S BIOGRAPHICAL STUDIES.* THE reprints of Mr. Bagehot's essays succeed, but do not resemble one another. In each there is not only more of what we have had...

Mn. FRANCILLON has, in this novel, both confirmed and aug- mented the respect we have always felt for his powers. In his choice of subjects, in his point of view, and in his...

MEMORIALS OF TORU DUTT.* APART from any question of substantive

worth from a mere librarian's or student's point of view, books like this are sure to be cherished for the pathetic sweetness there is in them, te say nothing of latent...

THE RIVER OF GOLDEN SAND.* Tax Gold-Sand River, or Chin-

Sha-Chiang, from which Captain Gill's interesting book derives its title, as he followed its course with but few derivations during twenty-four of his marches from Bat'ang to...

and there the scene is diversified by forests of pines,

oaks, MR. HODGSON has given somewhat too modest a title to this most and rhododendrons ; while elsewhere may be found walnuts, erudite work. Many of the chapters, indeed, have...

Round about Norway. By C. W. Wood. (Bentley and Son.)— This is a narrative of a journey made from Christiania to Bergen by the route over the Hie Fjeld, and of a voyage thence...